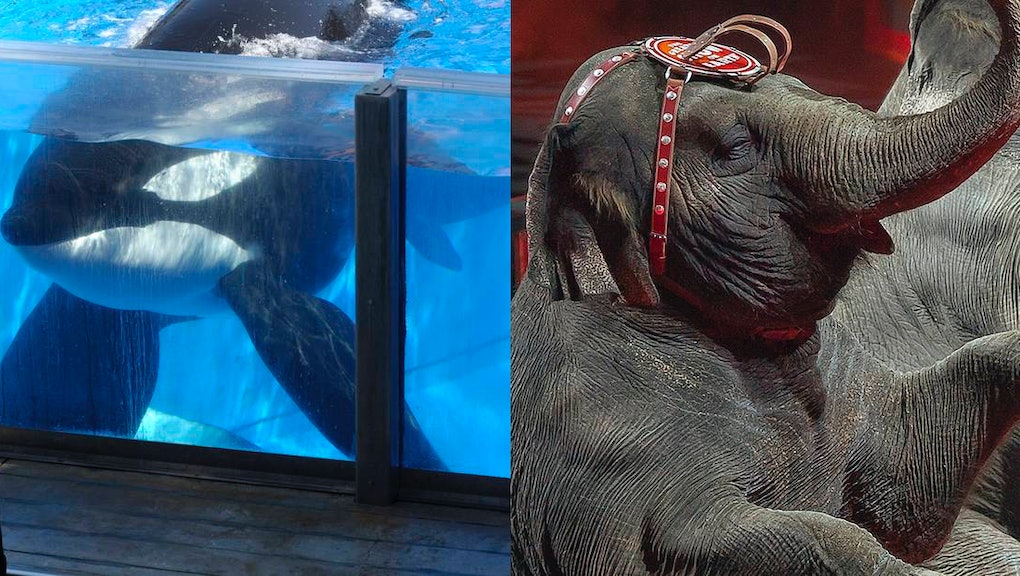 The "greatest show on Earth" is attempting to live up to its name.

As first reported in the Associated Press, Ringling Bros. and Barnum & Bailey Circus plans to gradually phase out the use of elephants in its circus act, a move made largely in response to growing public concern about animal welfare.

"There's been somewhat of a mood shift among our consumers," Alana Feld, the executive vice president of Feld Entertainment, told the Associated Press. "A lot of people aren't comfortable with us touring with our elephants."

In a press release, Feld Entertainment, which produces the circus, announced plans to remove all 13 of the Asian elephants currently traveling with the 134-year-old circus by 2018 and relocate them to the Ringling Bros. Center for Elephant Conservation. The center, established in 1995, is a 200-acre facility in central Florida that's home to more than 40 retired Ringling Bros. elephants.

Supporters of animal welfare are (mostly) ecstatic. "It's a day to pop the champagne corks and rejoice," said People for the Ethical Treatment of Animals, which has protested Ringling Bros. use of elephants in its circus acts for 35 years. In the same press release, however, PETA stated that "three years is far too long for the elephants who endure extreme abuse every single day," and called for Ringling Bros. to end its use of elephants in its acts immediately.

According to a report by PETA (an organization with an admittedly extreme stance on the issue of animal rights) current and former Ringling Bros. employees have reported that baby elephants in Ringling Bros. care "scream, cry and struggle as they are stretched out, slammed to the ground, gouged with bullhooks and shocked with electric prods" during training sessions.

The report also alleges that the circus' performing elephants are "routinely abused and violently beaten with bullhooks." A bullhook is a sharp metal hook attached to a pole used to train and control elephants, which PETA and other critics allege is a cruel use of pain to force elephants into uncomfortable and unnatural positions. Municipalities around the country have begun banning the use of bullhooks within their jurisdictions, which Ringling Bros. told the Associated Press was a motivating factor behind the decision.

"All of the resources used to fight these things can be put towards the elephants," Feld Entertainment President Kenneth Feld said, according to the Associated Press. "We're not reacting to our critics; we're creating the greatest resource for the preservation of the Asian elephant."

It's a huge move for Ringling Bros. — and for animal welfare. Elephants, the world's largest land mammal, are renowned for their high emotional and social intelligence, qualities that make the stresses of captivity and performance even more acutely troubling to human observers. Greek philosopher Aristotle once wrote that elephants are "the animal which surpasses all others in wit and mind." Elephants express a variety of behaviors, including those associated with grief, play, social altruism and language. Elephants have even been shown to understand human body language, an awareness previously thought to only exist in dogs.

Stephen Payne, vice president of corporate communications at Feld Entertainment, told Mic that the phasing out of animal acts will halt at elephants. "There are no plans to phase out any other animal acts in the show," he said. "We take great pride in our animal care and look forward to continuing to showcase both human and animal performers in the circus."

Asked if Ringling Bros. will become an advocate for industrywide reform regarding the use of performing animals, Payne said the circus will stay in its own wheelhouse. "We will not be commenting on the practices of other companies, but we will continue to focus our efforts on the care and conservation of our elephants," he said. "As for what work we might do with other animal welfare organizations, that has not been determined."

Elephants aren't the only hyper-intelligent animals being mistreated in captivity. Movements to remove some of the planet's most intelligent animals from human captivity have made great strides for some species. After decades of protests, the National Institutes of Health retired the vast majority of its chimpanzees from biomedical research; in December 2014, an Argentinian court declared that a zoo orangutan named Sandra was a "non-human person," and entitled to her freedom.

But no movement for the retirement of a species in captivity has been louder than that of scientists and animal welfare advocates pushing for the end of orca captivity, specifically at SeaWorld marine parks. Once feared as the "wolves of the sea," a half-century of scientific research has yielded abundant evidence that orca whales are highly intelligent creatures with impossibly complex social and family structures. That same research has led many marine biologists to conclude that the extreme isolation of SeaWorld's parks and the stresses of performance amount to animal cruelty.

The widespread popularity of the documentary Blackfish brought the issue to public consciousness for millions of Americans who had enjoyed the marine park's orca shows. The film focuses on the 2010 death of Dawn Brancheau, a SeaWorld trainer in Orlando, Florida, who was dragged underwater by Tilikum, a 12,000-pound orca whale, and killed her in front of a packed audience. Tilikum had been previously involved in the deaths of two other people, including a visitor to the park who had trespassed into Tilikum's tank in order to swim with him.

Blackfish argues that Tilikum's behavior was the result of decades of psychological damage caused by his captivity, a conclusion that was supported by scores of marine biologists. Brancheau's death led to a mandate by the Occupational Safety and Health Administration that human trainers stay out of orca tanks, a decision SeaWorld has appealed unsuccessfully.

SeaWorld isn't following RIngling Bros.'s lead — yet. According to Fred Jacobs, SeaWorld's vice president of communications, the marine park is nowhere near considering a similar move. "The Ringling Bros. decision doesn't affect us," Jacobs said in a statement to Mic, declaring the concept of retiring an animal from performance "anthropomorphic."

"It doesn't reflect the reality of marine mammal care in SeaWorld parks. For that word to be appropriate, shows would have to be viewed as work. They are not," he said. "For the whales, any interaction with our staff, including shows, is stimulating and positive. Even our opponents acknowledge that marine mammals enjoy interacting with trainers and doing so is important to their overall health and well-being. We are very proud of their care we provide to these animals."

Jacobs' assertion that opponents of SeaWorld's orca captivity support human-orca interaction is specious, to say the least, and ignores the widely held belief that longtime captivity can make orcas psychotic. In addition to lashing out against trainers, captive orcas respond to the stresses of performing with violence against other orcas, repetitive behaviors and withdrawal from performances.

If the move by Ringing Bros. to retire its most intelligent performing animals isn't enough motivation for SeaWorld to reconsider cetacean captivity, its bottom line may be: SeaWorld's stock has collapsed since Blackfish's release, and its CEO was recently forced out after its stock hit an all-time low. Scientific condemnation may not motivate corporations to retire performing animals, but an increasingly reluctant ticket-buying public might.