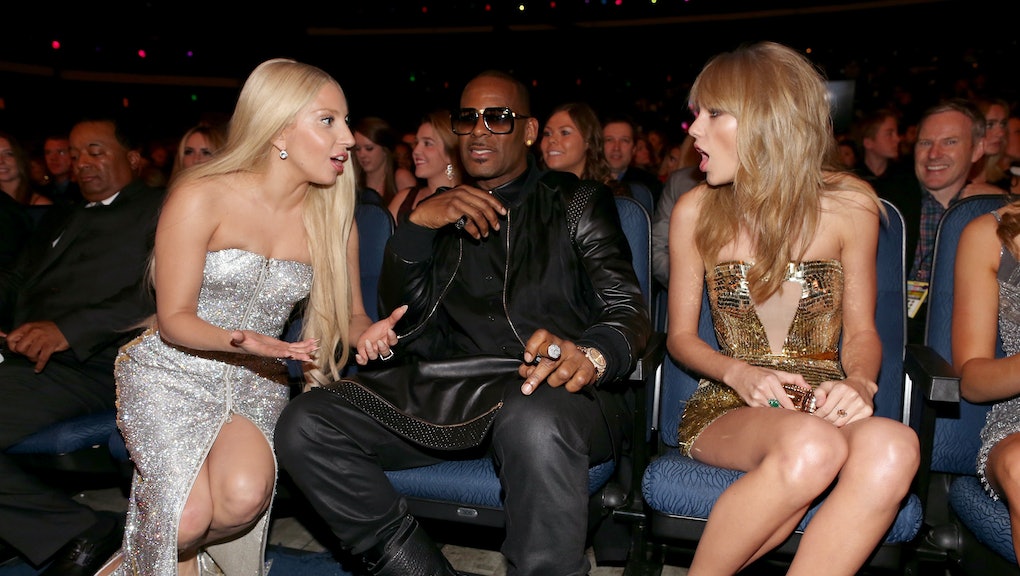 We're Happy for You Guys, but Please Stop Couplesplaining

Single people are often barraged with unsolicited love advice. Couples in particular seem apt to doling out these relationship platitudes, truisms masquerading as wisdom and delivered with an annoying air of superiority. In short, they're subjecting their single friends to "couplesplaining."

Even celebrities suffer the phenomenon. On March 1, confidently single Taylor Swift tweeted that Lady Gaga — who recently announced her engagement and jumped into a frozen Lake Michigan for charity with her fiance — seemed to be "fully LIVING right now."

To which Lady Gaga replied:

What stands out most is Lady Gaga's promise that Taylor's "prince charming will come!" It's a well-intentioned security blanket that those who have found someone tend to throw at their single friends. But the tone of certainty assumes expertise, as if being in a long-term relationship, engaged or married gives someone exclusive insights into the true nature of relationships present and future. For many single people, these constant assertions that they just don't know enough about love can turn a well-meaning conversation with a friend into another excuse for an eye-roll.

"'But you're so pretty! I don't get why you're single,'" is what Lynn, 27 tells Mic she gets all the time from her coupled friends. It's often followed by, "'You should try online dating; I'll write your profile.'"

Couplesplaining simultaneously explains why a person is single (as if there was a clear and obvious answer) and instructs them how to fix it. At its worst, it's not just accompanied by a heaping dose of presumption; it also disregards the fact that some people might not be looking for a relationship, or hints that something is inherently wrong with the single person. And it plays into an antiquated sensibility of getting married to find success, the long-standing myth that singleness is a disease for which marriage is the only cure.

As Boston magazine's Janelle Nanos writes, "In a survey taken in 1957, 80% of Americans believed that people who preferred to remain single were 'sick,' 'neurotic' or 'immoral.'" Those stigmas have faded somewhat but still persist, creating a cultural climate in which men and women who've coupled up can feel a sense of achievement. They've weeded through the record-high 124.6 million unmarried Americans and come out on top, after all. They have the wisdom — right?

Good intentions, poor delivery: At times, the insights of couplesplaining can also be so general as to simply dismiss and pacify the single person's concerns. "The most useless piece of advice I have received, over and over again," says Josh, 26: "'Oh, you'll meet someone at that wedding you're attending! There will be tons of girls there, just introduce yourself! That's a great atmosphere to meet people.' I spent years listening to this nonsense."

More offensive is when couplesplaining chides the person for their lackluster efforts — as if obtaining a S.O. can be guaranteed through hard work and determination. Mary, 25, tells Mic her most frustrated received comment is "'You gotta put yourself out there,'" she says. "It's as if existing and having a social life isn't enough — I should be baton-twirling and playing the kazoo to get attention."

Also subtly damning: the trite compliments that attempt to boost self-esteem, but double as backhanded insults of single people. "'What's wrong with our Jewish men these days? They are passing up all the gems for the shiksas,'" Kara hears from married relatives. The implication of "You're a gem, I don't get it" is that gems don't deserve to be single... and the non-gems do. It's a way of tacitly attributing singleness to a character flaw instead of the universal life experience it is.

Writing for Salon about single women, author Sara Eckel says, "Don't call them fabulous. My unmarried friends are smart, interesting women who are engaged in life. There's no need to wrap them in a feather boa."

It's not expertise, it's luck: Romantic advice often ignores a truth that's hard to swallow: Finding someone to settle down with involves a bit of luck, Salon's Tracy Clark-Flory explains. "The truth is that for the most part we married people have simply lucked out, but we delude ourselves into believing otherwise," she says.

And what it takes to strike that luck isn't so simple. Couplesplaining, Josh says, is "a function of the fact that people who find the person they want to be with tend to narrow their social lens." They aren't out there at bars trying to chat people up, or scrolling endlessly on dating websites. In fact, couples of more than three years don't have experience with now-common apps like Tinder, Hinge or Coffee Meets Bagel. It's hard to assess the modern dating landscape and provide useful feedback when you actually haven't experienced it firsthand.

But more so than the ignorant advice, the real issue with couplesplaining is that it brushes singles' experiences away with a broad, smug wave of encouragement, with little regard for the priorities and desires of the person on the receiving end.

Comments like Lady Gaga's are not ill-intentioned — in fact, even now, in a couple, Josh admits, "I also catch myself doing it and I try to tamp it down." But couplesplaining disregards the nature of what it means to be single. Wishing a prince for Swift ignores the fact that she is one of the most accomplished women in the music business, someone whose goal right now is to have "fun and as many adventures as possible," as she told the Telegraph.

And that's a conclusion she could come to without the help of any wise coupled friends.