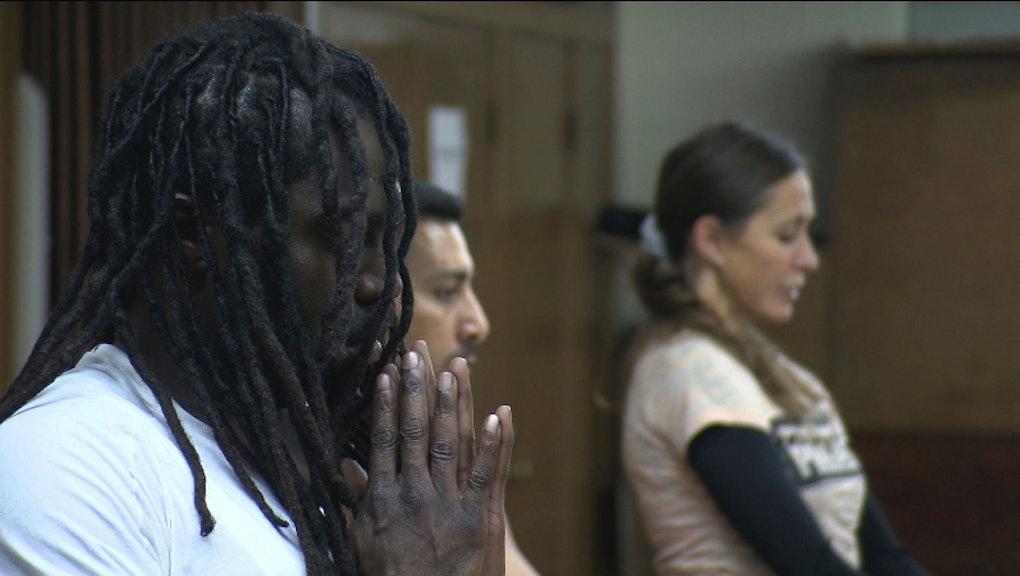 Charged with three counts of felony murder for serving as a getaway driver in a 1981 robbery that left three men dead, Judith Clark, now 62, is serving a 75-to-life sentence in Bedford Hills Correctional Facility for Women in Westchester County, New York. She fired no shots during the heist.

While accepting of her less-than-bleak shot at societal freedom, Clark has another liberating force in her life: Liberation Prison Yoga, a nonprofit that brings 18 different "trauma-informed" yoga, meditation and self-improvement programs to 143 prisoners in the New York City area.

Liberation Prison Yoga is the brainchild of Anneke Lucas, another strong woman with her own traumatic story. At the age of 5, Lucas' mother sold her into an international pedophile ring in her native Belgium. After five years of abuse, an insider brokered a deal for her release, and after stints in London and Paris, Lucas ended up in New York in 1985 at age 22.

She turned to yoga over 30 years ago; but in 2010, a Facebook photo of a prisoner meditating gripped her attention. "The prisoner in the photo had a bulging vein in his head. He looked angry but he was in a peaceful position," she told Mic. "The prison system is full of background stories that are closest to mine."

Touched by the photo, Lucas tracked down its photographer, Robert Sturman, who in turn put her in touch with the founder of Prison Yoga Project. As a grassroots initiative run by James Fox at San Quentin prison outside of San Francisco, prison yoga aims to address problems Lucas herself is familiar with, namely the experience of trauma.

Trauma is all too common among prisoners, from events both prior to incarceration and experiences within prison. Studies have shown that up to 92.5% of incarcerated young people have experienced at least one trauma. Other mental health issues are widespread, as well. According to a 2014 Treatment Advocacy Center report, there are 10 times as many severely mentally ill Americans in prisons than in psychiatric hospitals. According to another report, 70% of youth in juvenile justice systems have at least one mental health condition.

While one woman can't fix a broken system, practicing yoga can make a small but powerful difference in prisoners' lives.

"One of my former students who's now a successful paralegal once called me ready to kill herself," said Lucas, noting the woman was first jailed for stealing fruit from a grocery store. "However, she's come to realize that she has free choice and has started to use her practice and really work at doing everything with her highest happiness in mind."

More and more prisoners are getting that same opportunity. Liberation Prison Yoga was incorporated in September 2014 and now has programs at Rikers Island in New York City and two nearby Westchester County facilities. The entire organization runs as a nonprofit backed by the Broome Street Temple, and the majority of funds go toward scholarships to train all the volunteers, including 24 teachers. Lucas doesn't take a salary.

As for the teachers, Lucas aims to launch a 50-hour trauma-conscious teacher training course. "My training is all about trauma and how to connect with people and make them feel safe," Lucas said. "It helps them to hear my story. They think that if I got through it, then they can get it right too."

That background informs the details to how Lucas approaches the yoga practice. "Our language is very different [from a normal yoga class] and we never, ever use commands."

The 18 classes are available to all prisoners, male and female, as young as 16, but they range from advanced physical asana to mindfulness; from journaling to life coaching. One discussion-based class of six that meets in a conference room setting is specific for victims of sex trafficking. The class uses mindfulness and meditation techniques to help students deal with past trauma in a safe, relatable environment.

"One student in my sex trafficking survivor's class told me that she used to jump straight to drugs when she faced a problem," Lucas said. "Now because of the techniques she learned in class, she allows herself to sit with the discomfort knowing that everything will be okay."

Other students reap different benefits. "Judy Clark needs the peace and calm yoga offers. Another student, Rose, is off five pain medications and no longer uses a cane because of yoga," said Lucas. "Yoga is like health insurance in prison."

And more will soon. By the end of the year, Lucas plans to increase the number of classes and teachers, as well as expand to new correctional facilities, including a mother-baby yoga program at the nursery at Bedford Hills. To that end, Liberation Prison Yoga has launched an Indiegogo campaign to raise funds starting this week.

The plans are ambitious and diverse. "There is a huge difference between jails and prisons, detainees and the sentenced population," Lucas said. "We have programs at the forensic ward and at the hospital; in dorms housing mental health patients and in housing areas with programs for addicts."

But the beauty of yoga is that its benefits come in different forms, ready to be experienced in the most personal of ways. Clark, said Lucas, is just one heartening example.

"Judy is always at class, and she's wonderful," Lucas said. "She says she needs yoga, and while I can't take credit for her transformation, I'm happy to have her."

To learn more about Liberation Prison Yoga or inquire about becoming a volunteer, contact Anneka Lucas at anneke@liberationprisonyoga.com or visit the official website. To help with the $25,000 Indiegogo campaign goal, visit the organization's Indiegogo fundraiser page.