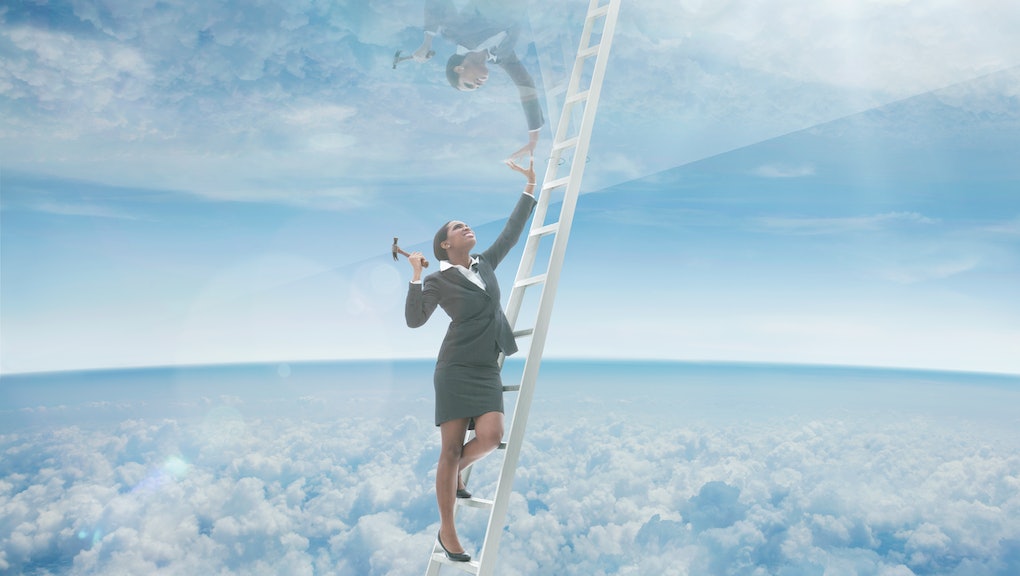 Brian Williams may be a liar, but the nightly news favorite isn't getting fired for his deliberate and repeated mistakes — two women are.

Surprised? You shouldn't be. Women taking the fall for men's mistakes is nothing new. In fact, it even has a name: the glass cliff.

The glass cliff, defined: The term, coined by researchers Michelle Ryan and Alex Haslam in 2005, describes the statistically supported argument that women, as well as minorities, are selected to lead businesses that are already on the brink of failure.

Such logic can have dangerous consequences: When a business then fails, higher-ups may blame the woman at the helm — and use her failure as evidence against putting another woman into a leadership role. As Ryan told the New York Times, "If someone has to be the scapegoat to take the fall, you're not going to put your best man forward ... Women are thrust into desperate situations precisely because they're likely to fail, generating 'proof' that women can't handle responsibility."

Sexism in the form of "scapegoating": In the frame of the glass cliff theory, women are not seen as leaders so much as mother-like caretakers who can fix a male-led company's boo-boos. Examples of the glass cliff are insidious because they involve men deliberately elevating women to executive roles in bad faith, or with false recognition of women's talents and abilities.

This phenomenon has been documented in a number of industries, from media to automotives. As Forbes succinctly put it, "Women from Jill Abramson at the New York Times to Sallie Krawcheck, former head of Merrill Lynch and Smith Barney, have fallen into this pattern." Bryce Covert, who has written about the cliff variously for ThinkProgress, highlights other prominent victims like General Motors' Mary Barra, Xerox's Anne M. Mulcahy and Sunoco's Lynn Laverty Elsenhans.

This doesn't just happen in business. In media, Covert noted in her piece about the Brian Williams scandal, "Katie Couric became anchor of CBS Evening News after its ratings were in third place, and Diane Sawyer was hired at ABC World News after evening news programs had lost more than half of their audience."

The glass cliff reinforces the glass ceiling. Even if women break through the glass ceiling, they are, more often than men, fired from leadership roles. Strategy&'s 2013 report, which relied on 10 years of research, found that "a higher share of women have been forced out [of office] than men (38% of women vs. 27% of men)."

What's more, as the New York Times wrote last week, more female CEOs are targeted by "activist investors" who seek a heavy hand in women's leadership. "Researchers have also shown that executives who are women may be expected to be more likely to compromise and less likely to fight," Andrew Ross Sorkin writes, "which, for an activist seeking a role on the board, may make it a more attractive target."

Sorkin's article led Kimberly Weisul to deduce, in a piece for Inc., that "it would stand to reason that women CEOs would be more likely to be targets for activist investors. In many cases, those investors were probably already champing at the bit before the women became CEOs."

An easy solution? If the glass cliff reinforces the glass ceiling, we can just as easily suppose, as Rachel Sklar does in a piece for Marie Claire, that with more women breaking through the glass ceiling, statistically fewer women would be scapegoated. If figures are right, Sklar notes, there are more women in charge of Fortune 500 companies than ever before — which means that someday, all these glass metaphors will finally cease to exist.