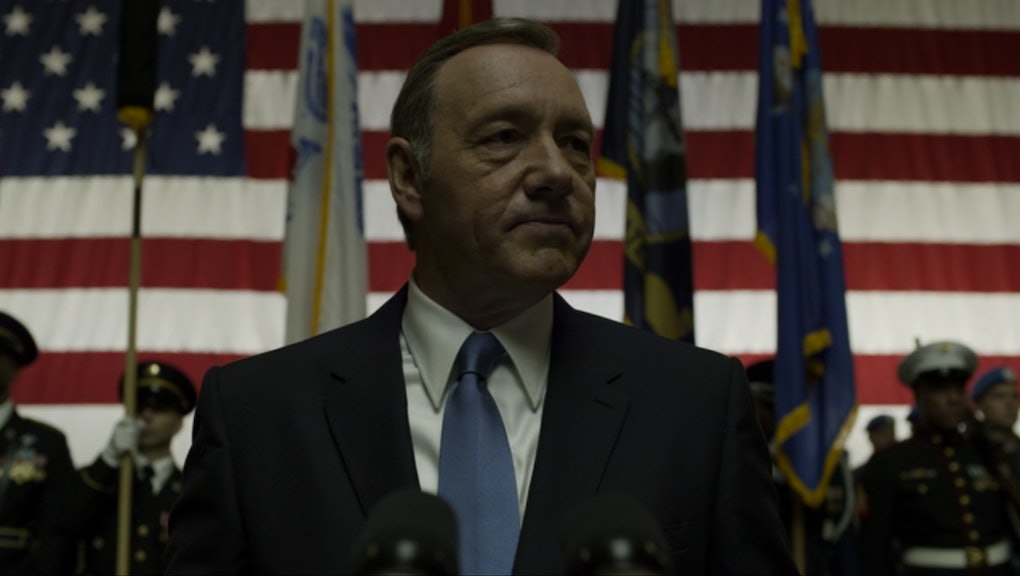 After two episodes of intense focus on the Underwood marriage, House of Cards has finally looked beyond the White House master bedroom for a story. What did it find? Not much.

A hurricane is headed straight for the eastern seaboard, and President Frank Underwood has a dilemma on his hands. Ordinarily, FEMA's emergency fund would be available for disaster relief, but the commander-in-chief doesn't have that option: He controversially drained FEMA to fund his beloved America Works program. Congressional Republicans are happy to bail him out with emergency relief funds — they just want to defund America Works in the same bill. In news that would shock no one, Frank doesn't handle being backed into a corner very well.

Despite his entire cabinet (including his wife, first lady/Ambassador Claire Underwood) urging him to sign the bill, Frank clings desperately to the hope that he can save America Works. Maybe the hurricane will turn, he tells House minority whip and Potemkin presidential candidate Jackie Sharp. "Weathermen can be wrong, Mr. President, but not every weatherman in the country," she responds. He admits defeat and signs the bill.

Turns out, every weatherman in the country was wrong. The hurricane never hit the shore; Frank killed America Works for nothing. It's not all bad, though: As he tells his biographer Tom Yates, this is the chance for him to declare his candidacy for president, all for the sake of bringing America Works back.

Speaking of Yates: After she drafts an editorial about what she considers the disastrous Underwood administration, Kate Baldwin is told she needs a quote from the White House to balance it out. She goes to Yates; he's tight-lipped but welcomes the idea of getting closer. Cut to Baldwin waking up in Yates's bed, wearing his shirt — the same shirt he wears to his meeting with Frank the next day.

There's also some business about former Solicitor General and current presidential favorite Heather Dunbar and Jackie Sharp suspending their campaigns to deal with disaster relief, but it's indicative of the episode's lack of substantive plot that it barely registers. Was the threat of a storm enough to fill an episode? Or were we as gutted as America Works?

Kevin O'Keeffe: Scott, I admit I was bored by this episode. There's some metaphorical significance in the event that was teased for the entire story not actually coming to anything. It was a "sound and fury, signifying nothing" kind of installment, seemingly designed to kill America Works and give Frank motivation to run for president again. But after two episodes that managed to be intriguing while also progressing the plot, this one felt a bit wan.

I'm so mad we didn't get to read Kate's whole story. It sounded like a real barnburner, from the choice quotes we got, and as a writer, I appreciated her appeal to her editor fighting to get her own ideas out there rather than editing other scribes's words. But that's the concern about hinging your entire piece on a hurricane metaphor: When the hurricane goes away, you lose the story.

What did you think of our stormless storm episode?

Scott Bixby: Hurricanes make for a great dramatic metaphor in television: Hurricane Sarah in The West Wing, Hurricane Lenore in Nip/Tuck, Hurricane RuPaul in Family Guy. In this case, it was "Hurricane Faith," a tropical cyclone as heavy-handed in name as in metaphor. The sooner we let it spin out to sea, the better.

While the hurricane's about-face into the Atlantic was good news for the East Coast, it was bad news for Kate's "J'Accuse!" hitpiece on Underwood's usurpation of the Oval Office as his imperialist plaything. Interweaved with splices of author/plagiarist/probable future presidential hookup buddy Tom's yammerings about a young Frank swimming to an island, Kate's hurricane-themed denouncement is the only acceptable use of weather symbolism in this entire episode. After Hurricane Faith fails to make landfall, however, she declares the story dead, mostly through failure of adequate metaphor.

Sidenote: Really, Kate? You're going to spike a story that unveils the president as a cartoonish supervillain because your framing device isn't topical anymore? I was rooting for you! We were all rooting for you!

O'Keeffe: Learn something from this, Kate! (Except I agree with her a bit? If your metaphor dies, you gotta throw out the baby with the bathwater.) She can take another shot later on — unless, of course, she lets Tom work his way into her plans with his charm and five-day scruff. (Hope she doesn't find out about the hustler past.)

But let's talk about where we knew this season was going: Frank is running for president. This was always going to happen, of course, but I'm interested in how the man who stood up in front of America and said, "I will not run again," is going to announce he's running again. One of the biggest criticisms I've heard of the show's past two seasons is that it's a lot of people sitting around watching Frank manipulate his way to the top, shrugging their shoulders and saying, "He can't be stopped." If he doesn't encounter major resistance in the polls after announcing part two of his candidacy, I'm going to call shenanigans.

What do you think? Any other thoughts on this fairly lame installment?

Bixby: For me, the most resonant (okay, the only resonant) part of this episode was the return of Freddy, former owner of Frank's favorite rib joint who was forced to sell his restaurant after the press dug up his ex-con status. Through America Works — and Frank's guilty conscience — Freddy has found employment at the White House (which is actually a pretty good selling point for the program — why the hell isn't Tom Yates writing a book about this guy?).

In a rough scene following a meeting in the Oval Office, Freddy tells his wide-eyed grandson that no matter what Frank tells him, he will never be president. "Oh, that's never gonna happen." When his grandson protests, Freddy lays down a hard truth one can only learn two ways: By being incarcerated in America's broken justice system, or by proximity to Frank Underwood. "Listen up, boy: He lied to you. The truth is, you're never gonna be president. It's just like them basketball players you've got posters of. They say you can do anything, be a superstar too, but they were born to be seven feet tall. And if they wasn't? Tell me, what would they have? Nothing."

He goes in for the emotional kill: "No, boy, this place ain't for you and me. It's good to have dreams, just so long as they're not fantasies. You let anybody sell you that shit, it's your own damn fault."

This season, the Underwood administration is selling the American people the same old shit and calling it sugar — and House of Cards has been doing the same thing to its viewership. After this weak episode, we may finally be waking up and smelling the fertilizer.