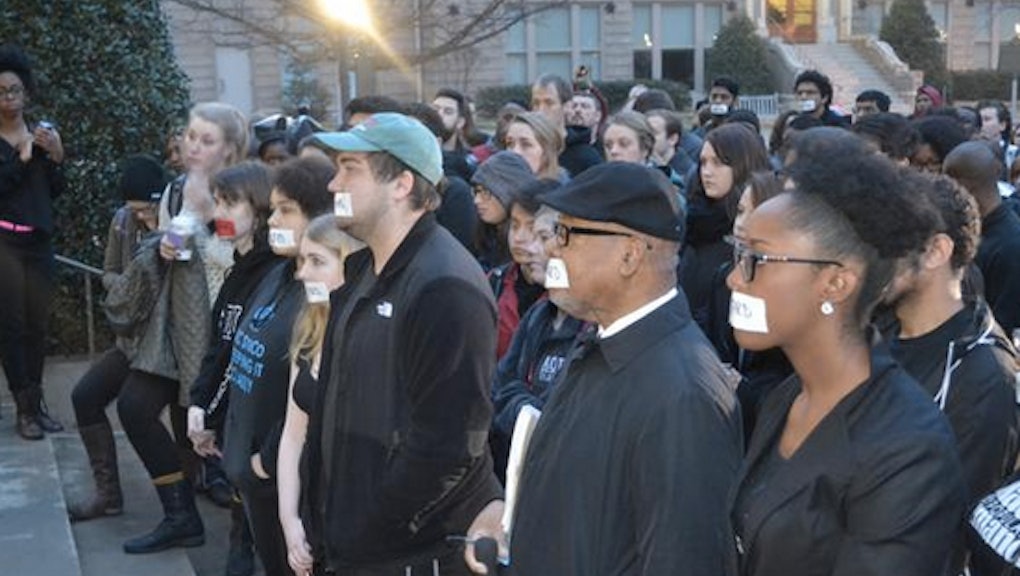 It looks like another college fraternity has shown its true colors.

A recent leaked video shows members at the University of Oklahoma's chapter of Sigma Alpha Epsilon singing a racist chant — one that apparently signifies how this group of "true gentlemen" truly feels about black people.

The historical context makes this video all the more disturbing. The University of Oklahoma is a predominately white campus, and held anti-black admissions policies until 1950. The chant's lyrics are undeniably racist, featuring jokes about this country's sordid history of black lynchings and the chapter's purportedly exclusionary stance towards black members.

For many decades after slavery was abolished, black people endured the lingering threat of being lawlessly hung from trees for any number of reasons, including "arguing with a white man." Images of bludgeoned corpses or lifeless bodies hanging from trees were even distributed on postcards. The lynchings resulted in the deaths of nearly 4,000 black people, with little-to-no legal accountability, according to a February 2015 report from the Equal Justice Initiative.

The weight of that history appears to have been lost on many university students. Amidst the outrage over this group's bigoted chanting emerges an issue that still pervades predominantly white institutions of higher learning: It's clear that lessons about the importance of racial inclusion remain largely absent from the experiences of students at many of these colleges and universities.

In response to the video, the hashtag #SAEHatesMe began trending on Sunday evening. Many have used the hashtag to decry not only the leaked racist video, but also a longstanding trend of bigoted behavior from various fraternities and sororities.

Harsh consequences. For now, the students in the video are in for a rude awakening. The national Sigma Alpha Epsilon organization announced Sunday that the Oklahoma Kappa chapter is officially closed and all members are suspended. Those directly involved face the possibility of expulsion. Some angered community members went a step further and reportedly vandalized the SAE house at the University of Oklahoma and spray-painted one side of the house with the message "Tear it down."

Brad Cohen, national president of SAE, sent tweets condemning the video soon after its leak, promising that those present would be "dealt with" accordingly. Cohen eventually tweeted a link to the organization's official statement.

"This type of racist behavior will not be tolerated and is not consistent with the values and morals of our fraternity," the statement noted. "We have more than 15,000 collegiate members across the nation, and this incident should not reflect on other brothers because this type of hateful action is not what Sigma Alpha Epsilon stands for. This is absolutely not who we are."

In a statement on Facebook, University of Oklahoma president David Boren called the fraternity's actions "disgraceful," going as far to say the students shouldn't have the privilege of calling themselves "Sooners."

"Real Sooners are not bigots. Real Sooners believe in equal opportunity. Real Sooners treat all people with respect," Boren said, also noting that the university would sever all affiliations with the local SAE chapter and give its members less than 24 hours to vacate their fraternity house. "We vow that we will be an example to the entire country of how to deal with this issue. There must be zero tolerance for racism everywhere in our nation."

Although the national board of SAE professes this type of behavior isn't emblematic of the their culture, it may be a reflection of how some of the organization's members continue to exhibit a perfunctory understanding of racism.

The same could be said for many other fraternities and sororities on college campuses. Several stories like this emerge every year, including those about racially-themed parties featuring Greek organization members parading around in sombreros and moustaches, yellowface, blackface and other demeaning tropes of people of color.

If anything, stunts like the Oklahoma Kappa chapter's racist sing-a-long prove that the administrators of both Greek organizations and colleges across the country need to work towards ensuring their students won't learn about the importance of racial inclusion only when something terribly bigoted happens. Rather, they should have serious conversations about instituting policies and practices that make it an uncompromising community value.