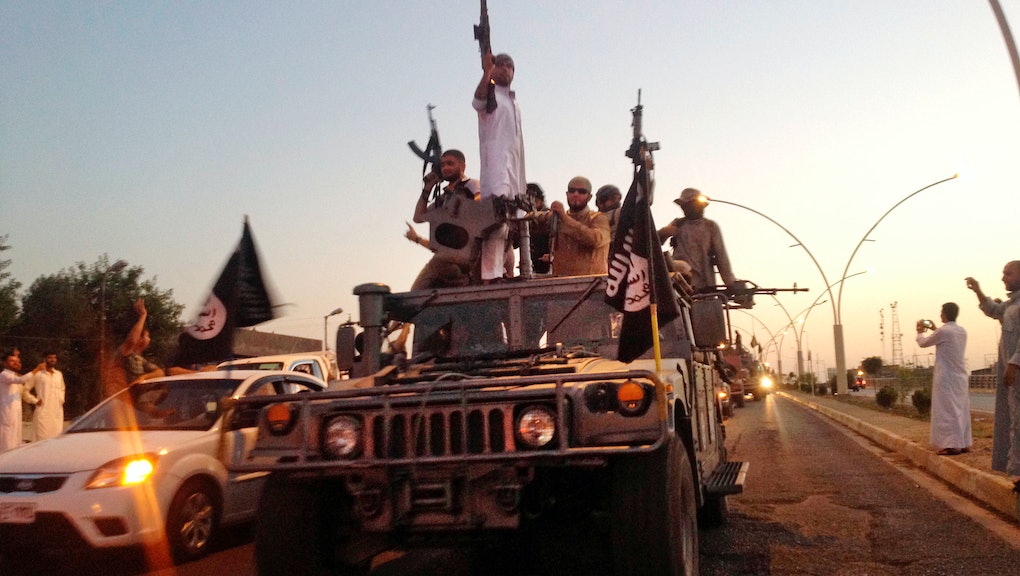 The human cost of the rise of the Islamic State group is well-documented: thousands shot or killed, women forced into sex slavery and billions in forced tribute and stolen resources. However, a less well-known but still important cost is the massive damage IS fighters have wrought upon the culture and history of Iraq, where militants have busied themselves destroying statues, bulldozing archaeological sites and burning books.

What IS is doing: The Iraqi Cultural Center, a nonprofit institution that works as the Washington D.C., arm of the Iraqi Ministry of Culture, has been regularly posting news of the Islamic State group's destruction of archaeological sites, cultural centers and various collections of literature and art. From the medieval citadel at Tal Afar to the central museum in Mosul, areas where IS fighters have usurped local authorities have become places where relics are at constant risk of being purged.

A video of IS militants destroying statues at Mosul Museum recently surfaced and outraged the world. The Los Angeles Times argued it may just be a fabrication intended both to inspire new recruits and provide cover for the mass looting of said artifacts, since many of the statues destroyed appeared to be plaster replicas.

But antiquities expert Christopher Jones, who analyzed videos released by the group in a two-part series, concluded that the damage in the Mosul area was nonetheless astonishingly bad. For example, Jones noted the destruction of original Assyrian statues from the Nergal Gate in the ruins of Nineveh near Mosul, which date back to 704-690 B.C.:

Nearby, IS fighters defaced other statues that were less well-preserved than the originals, but still irreplaceable:

Jones called the destruction of artifacts at Mosul Museum "absolutely devastating," highlighting the damage done to relics from the Roman-era city of Hatra. While he confirmed that some of the works destroyed were replicas with the originals safely stored elsewhere, others appeared to depict the destruction of genuine items.

"The damage by ISIS to the artistic legacy of Hatra has been catastrophic," Jones writes. "This tragedy is compounded by the fact that Hatrene sculpture has been chronically understudied. ... The primary publication of the finds is in an Arabic-language book often inaccessible in the West. Very few scholars outside of Iraq have had the opportunity to study the statues."

The damage done to the museum was bad enough, but IS fighters reportedly also bulldozed the Hatra site itself. Nearby, militants subsequently did the same to the city of Dur Sharrukin, which was founded in 717 B.C. They also carried out destruction at the palace of Nimrud, bulldozing parts of the site and destroying others with sledgehammers, drills and explosives.

Literature gets the same treatment. The Guardian reports that 100,000 books and manuscripts seized from Mosul's central library had been incinerated by militants using IEDs, an act UNESCO described as "one of the most devastating acts of destruction of library collections in human history." According to the Fiscal Times, about 8,000 of the pieces were rare or old. IS fighters reportedly left some Islamic manuscripts untouched.

Why and how: Seth Jones, who heads the RAND Corporation's International Security and Defense Policy Center and previously was a plans officer and adviser to U.S. Special Operations Forces command in Afghanistan, told Mic via email that the chaotic situation in Iraq makes determining the scale and intent of the destruction hard.

"Without better and more accurate primary source information about the inner workings of ISIL on cultural works, it's difficult to know how much of the group decision to target of Iraqi cultural works has been indiscriminate," Jones wrote. "Based on their actions, however, it appears that some of IS's activities, such as the targeting of Dur Sharrukin, have been intentional."

And those intentional activities, according to Jones, have a clear objective.

"An important component of IS's practice of destroying so many works of literature and art appears to be ideological. They consider ancient art — particularly if it is not grounded in Islam — as idolatry. And it must be destroyed," he wrote. "However, IS supporters have also been involved in the looting of antiquities — as opposed to destroying them — to raise money."

But he was clear that the destruction wasn't wanton but instead likely was the result of calculated decisions by group leadership. This is art destruction by committee.

"IS has a fairly well-organized command structure to run its operations, with committees that deal with media efforts, military operations, religious affairs and numerous other aspects, including financing," Jones said. "Based on their organizational structure, I strongly suspect they have a process to discuss and debate the desecration of cultural works."

A crisis without parallel: Jones told Mic that he believes the destruction being carried out throughout Iraq by IS is unparalleled in the history of extremist organizations.

"Some extremist groups, such as the Taliban, have destroyed cultural works. In 2001, the Taliban destroyed parts of the large Buddha statues in Bamiyan Province after condemning them as idols. In addition, some of the Ansar al-Sharia Libya groups targeted Sufi shrines in the country, including in Benghazi, which they considered idolatrous," he said.

"As a general practice, however, most jihadist groups have not engaged in widespread efforts to destroy cultural works. As far as I'm aware, most of the destruction or looting of cultural works in North Africa, the Middle East and South Asia has been perpetrated by criminal groups interested in financial gains."

To those who have devoted their lives to the study of archaeological artifacts, the crisis is more personal.

"I wished it was a nightmare and I will wake up to find everything is OK, but that did not happen, and it was real," archaeology professor Abdullah al-Jumaili told Al-Jazeera. "What I was afraid of just happened."

"Nine hundred years ago, the books of the Arab philosopher Averroes were collected before his eyes ... and burned," Mosul activist Rayan al-Hadidi told the Fiscal Times of the destruction of the central library in Mosul. "One of his students started crying while witnessing the burning. Averroes told him ... the ideas have wings ... but I cry today over our situation."