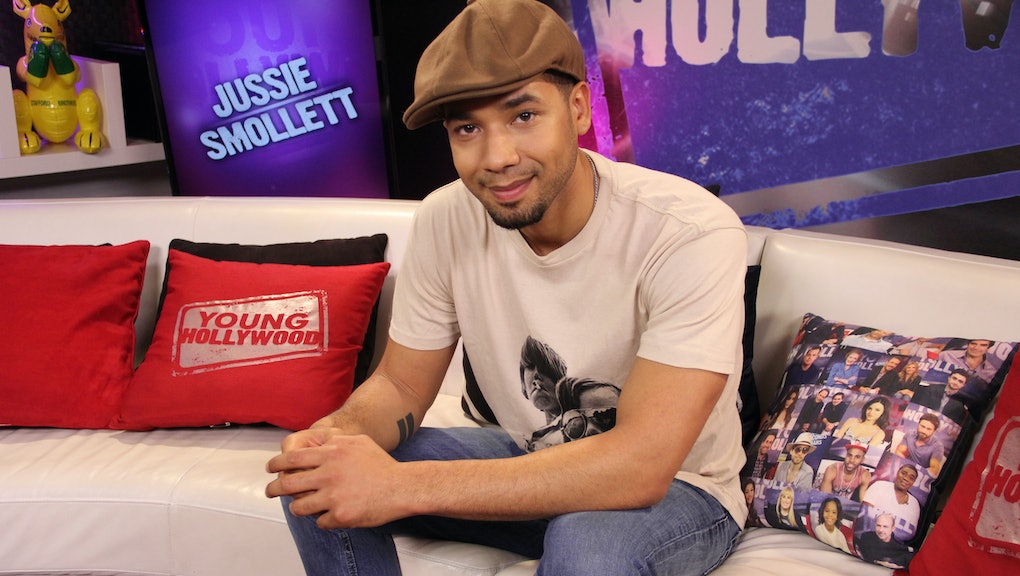 An 'Empire' Star Came Out, But It's How He Did It That Matters

In many ways, it's poetic: Empire star Jussie Smollett came out publicly to the woman who broke ground for gay TV stars coming out of the closet.

In an interview with Ellen DeGeneres behind the scenes of her talk show Monday, Smollett told the woman who once declared her sexuality to the world on the cover of Time magazine that he's never considered himself closeted.

"There's never been a closet that I've been in," he said in a sit-down interview after filming his main segment for The Ellen DeGeneres Show. "I don't own a closet. I got a dresser, but I don't have a closet."

The interview was likely in part a clearing of the air after a recent dustup in which Smollett's co-star, Malik Yoba, confirmed the actor was gay. Yoba backtracked afterward and said he was misquoted.

Intriguingly, Smollett never actually said the word "gay" in his coming-out interview. In this way, he's taken another step in what has been a years-long progression of what the public coming-out really means.

Eighteen years ago, DeGeneres came out on the front of a national magazine simultaneously with her character, Ellen Morgan, on her sitcom Ellen. It was unprecedented at the time, so naturally it garnered a backlash. The sitcom was canceled a year later, and it took time for DeGeneres to gain her footing again. In 2003, she launched The Ellen DeGeneres Show and now rules daytime. But for a period, coming out of the closet had done real damage to her career.

Conversely, in the years since, coming out has become less a threat to a career and more of a boost. Lance Bass reinvigorated his brand by coming out on the cover of People magazine in 2006. He's parlayed that into a post-music career for almost a decade, leading up to his history-making same-sex wedding special Lance Loves Michael on E! in February.

Others who came out after DeGeneres — Neil Patrick Harris, Jim Parsons, Zachary Quinto and Matt Bomer, among others — have continued to grow their careers with little to no impairment from their announcements. But in each of those cases listed, their personal news wasn't trumpeted on a magazine cover or part of a journalistic profile. They each represented part of a progression in the way gay public figures come out.

Harris simply dispelled rumors that he had denied he was gay. Bomer thanked his partner in an acceptance speech. Quinto just slipped a mention of it into a New York magazine profile. Parsons did the same in the New York Times. These were treated as dramatic announcements by the press, but for each, it was more a quiet confirmation of fact.

Smollett's coming out indicates that the subtler pattern is becoming the dominant one — coming out is less of an event for the individual. That said, the closet door still hangs in an awkward state for some. Stars like Kevin Spacey and John Travolta will be dogged by accusations and "outings" for years to come. Jodie Foster's strange, rambling speech at the Golden Globes two years ago indicates the public coming-out is not yet dead.

But as Foster said in her speech, many don't see the public coming out as necessary — simply because it isn't a public issue:

"I already did my coming out about a thousand years ago back in the Stone Age, in those very quaint days when a fragile young girl would open up to trusted friends and family and co-workers and then gradually, proudly to everyone who knew her, to everyone she actually met. But now I'm told, apparently, that every celebrity is expected to honor the details of their private life with a press conference, a fragrance and a prime-time reality show. ... If you had been a public figure from the time that you were a toddler, if you'd had to fight for a life that felt real and honest and normal against all odds, then maybe you too might value privacy above all else. Privacy."

There are arguments as to whether or not the public coming out is necessary, arguments that surface every time a prominent person does come out, including and especially today. But more and more, coming out of the closet seems to be about downplaying the action and simply stating the truth.

The ideal is a post-heteronormative world where public figures aren't assumed to be straight, but can simply be who they are. It won't have to be something Foster feels like is private — and that said privacy is being invaded — but it's just a fact of life. We're not there yet, but with more steps like Smollett's, we're getting closer.