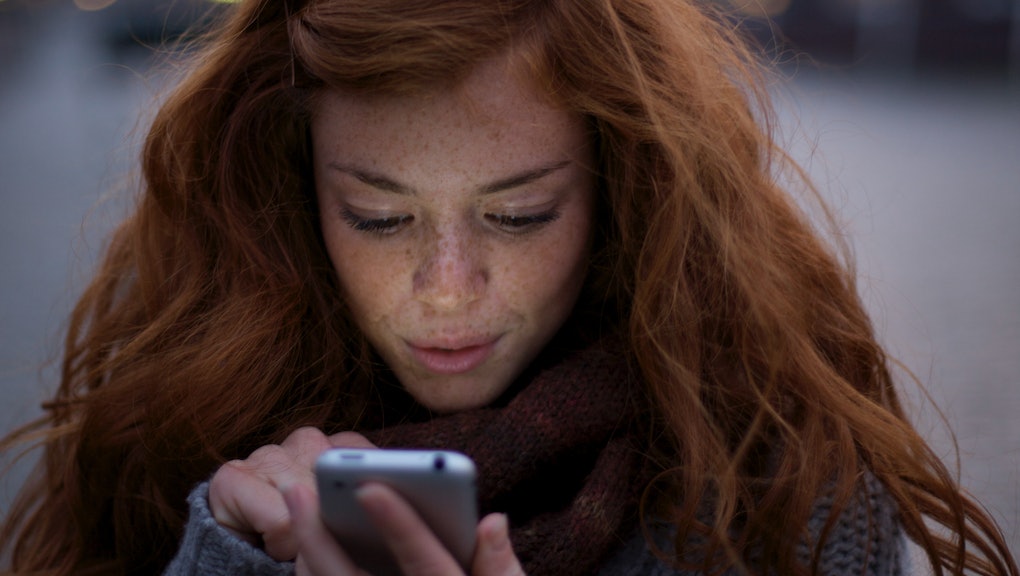 What Your Psychologist Wants You to Know About Your Dating Apps

Confession: I don't like meeting people online. That might be an unpopular opinion these days, particularly from a young person otherwise fascinated with the Internet and digital media. But I find it awkward and difficult engaging with people through a iPhone or computer screen. I value hearing voices and seeing expressions and being able to laugh. I really, really like to laugh. Striking up romantic encounters without these things first overwhelms me.

Turns out there are actual reasons behind my aversion and so many others' — psychologists confirm there are actual downsides to online dating, ones that affect the way we interact with the world around us.

Getting too confused to choose: The beauty of online dating is also one of its downfalls: endless choices. "A huge part of the value of online dating," dating consultant Steve Dean told Mic, "is just really rapidly expanding your social circles in a way that clarifies intent." But sometimes the circles rapidly expand without intent becoming any clearer.

A psychology study in Taiwan found that people were quickly — and easily — distracted when they had too many options. They couldn't filter properly and lost track of what they were originally searching for, eventually making bad decisions.

Arturo Gutierrez, a 25-year-old student, told Mic that, as a gay man, he appreciates online dating for opening up a bigger queer community, but he finds the abundance overwhelming. "There have been times when I'm getting messages from a lot of people," he said, "and you have to remember that you're there to find what you want, not to say yes to anyone and everyone who approaches you."

Replacing people with profiles: Eli Finkel, a psychologist at Northwestern University, co-authored a 2012 paper examining the ways online dating affects users that had unflattering findings: All the quick-sort choices made people more judgmental and more picky.

"Online dating creates a shopping mentality, and that is probably not a particularly good way to go about choosing a mate," Harry Reis, a University of Rochester psychology professor and co-author of the paper, told CNN. Other experts have noted the same metaphor, with researchers even using the term "relationshopping" in a 2010 study.

That "shopping" mentality extends to the way we view one another. Gwendolyn Seidman, social psychologist at Albright College, told Mic that the abundance of choice and shopping leads us to "not take any one person too seriously and to treat the profiles like commodities, rather than people."

It's an inevitable outcome given the very nature of the apps, with the quick swiping and infinite scroll. As Finkel told CNN, "Don't assume that more time spent browsing profiles is going to improve the odds of meeting someone who is really compatible. Be as quick and haphazard as you want with that process, because it's not meaningful."

So we judge based on looks or specific personality quirks that can be boiled into quick takeaways: what someone does on a Friday night, the books they read, the kind of job they have.

"With so many choices, we can start to take people for granted and assume that there is someone better out there," Seidman said. Ironically, the craving for more and better human connections leads us to simplify and commoditize each other.

Psychological silver linings: For all of its downsides, online dating obviously has its benefits. "I think the kind of response you get dating online does come as a bit of a reality check, and that can be a little difficult to take," Gutierrez said, a process that's made him "more level headed and patient with others."

"It's a good way to meet people," Seidman said. "But with most things in life, it is up to the individual to determine if it's benefiting them. If you're single and looking, creating an online dating profile is probably a good idea. But if the results you're getting from it are making you unhappy, then that suggests online dating may not be for you."

But if you're staring at your phone and feeling a profound sense of confusion, distrust and cynicism, know that it's not just you. Oh, and that it's possible to date successfully with no apps at all.