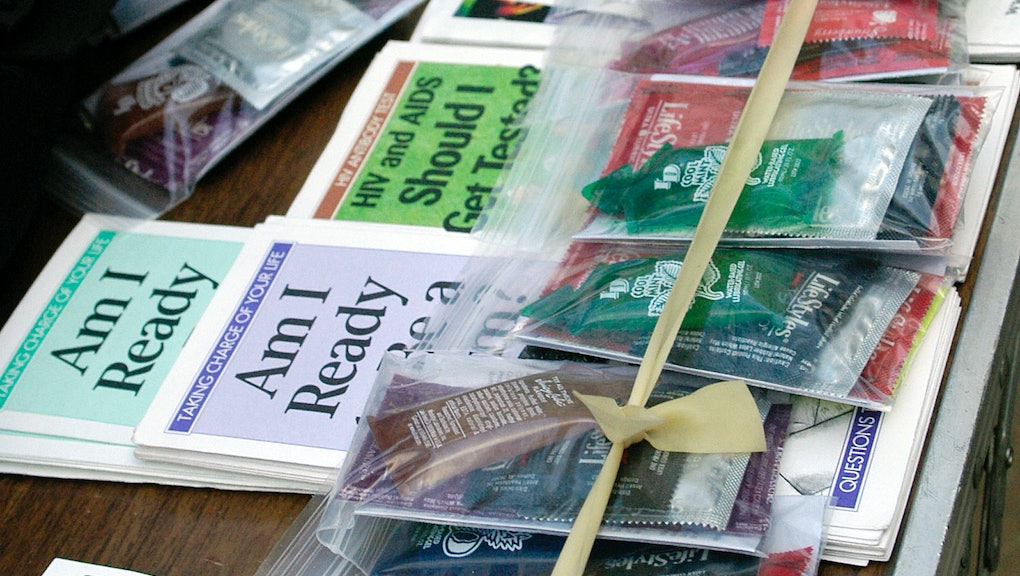 According to BBC News, the British government will soon implement sexual consent education for children as young as 11. The new curriculum, a Department of Education representative told the Telegraph, will help students "develop important personal skills and attributes and develop their emotional well-being" by teaching that consent must be "clear, informed, willing and active," and never assumed.

Such a thing would likely not fly in America; as much as sex pervades American culture, we still attempt to shield children from the fact that it even exists. When it comes to actually talking about sex, it seems that Americans resist accurate, comprehensive education in a way many other countries do not.

As the world continues to progress in terms of its approach to this education, it's crucial to reflect on the many backward attitudes and harmful misconceptions Americans perpetuate through our less-than-ideal sex ed. The following are the biggest myths about sex ed we need to tackle, according to sexologist and sex educator Logan Levkoff and Indiana University associate professor and sex researcher Debby Herbenick.

1. "Sexuality education is only about sex."

It's a struggle to implement sex ed that actually acknowledges that teens have sex in the first place. Despite 71% of Americans having sex by age 19, according to a study by the American Academy of Pediatrics, and abstinence-only sex education proving to be ineffective, only 22 states and the District of Columbia require comprehensive sex education.

What most people don't realize is that ideal sex ed extends far beyond teaching young people about the act itself. The concept of consent, for example, is an essential element of comprehensive education. Consent, Levkoff told Mic, requires "recognizing that people have the opportunity to have a voice, to use their voice, to speak up for themselves and have their needs and wants respected." This can be sexual, but is more about "just being a human being."

"Even at young ages, you're learning that you just don't touch other people unless it's okay with them," Hebernick told Mic. "Those are the lessons you build on later on around middle school age, when you're more likely to be talking about sexual consent."

Levkoff also said that ideas of consent shouldn't be relegated to discussions about sex. "It's much easier for kids to practice and model that language when it's not about something explicitly sexual, so that when they become older and need to use these words in a dating or sexual capacity, they can do it," she said.

2. "Consent is about the absence of a 'no' rather than the presence of a 'yes'."

Sex ed rarely accounts for the concept of consent, and even when it does, it often reflects a gendered double standard: Girls are taught that it's their duty to police boys by saying "no," while boys are expected to test sexual boundaries.

"'No' is important," said Levkoff, "but teaching our young people how to evaluate a relationship and how to stand up and say 'yes,' and to own that yes and not feel like we need to judge other people for saying yes, is really valuable too." This emphasis on "yes," also known as enthusiastic consent, allows women to advocate for their sexual desires "free from guilt," Levkoff said, "[so] that it's clear that that is what an individual wants."

Still, Hebernick noted, saying yes is often challenging, especially for women in a society so deeply committed to shaming women for expressing their sexuality. "Young women will say that they don't necessarily feel they can give that enthusiastic consent because there's so much slut-shaming that goes on," she said. While focusing on sex positivity is great, she said, we also need to address the deeper reasons women feel prevented from saying "yes."

3. "Only certain types of sex ed are 'age-appropriate'."

While there are certainly limitations to what and when children should be taught about sex, age is not the most useful factor to determine them, according to these experts.

"Even within the same age, you're going to have different kids with different kinds of questions," said Herbenick. Rather than focus on age, many educators focus on education that's "developmentally appropriate." This can be determined by factors such as geographic location (urban centers versus rural areas) and differing personal needs.

While Levkoff has taught children as young as 4, 5 and 6 about things like reproduction, she has also taught teenagers who "are far less capable of handling the information in such a mature way."

"I don't think it's about age — I think if a kid asks a question they deserve an answer no matter what," she said. "Kids are really capable of hearing the facts when they ask for them."

4. "Not teaching kids about sex means they won't learn about sex."

"Research shows that teenagers are more likely to get messages about sex from their friends and the media as opposed to their parents," said Hebernick, also noting that these cues are hardly healthy, accurate or, in many cases, even humane.

Levkoff agrees, and said that while there are certainly benefits to the proliferation of media and social media as it relates to sexuality — including allowing people to find communities and support based on their sexual identity — social media can also work "in a really unhealthy way." Ultimately, she said, parents and caregivers have a responsibility to intervene.

Research has demonstrated that educating children about sex has no correlation with earlier onset of sexual activity. On the contrary, sex education, Heberneck said, "sometimes delays sexual activity" and encourages the use of contraception "when people do have sex." Abstinence-only education, on the other hand, has been linked to higher teen pregnancy rates and is otherwise ineffective.

Levkoff said that sex ed may impart a more mature view of sex that will lead to more informed, safer choices. "As long as [children] have the ability to ask questions," she said, "it's not a big deal, it's not taboo." Parents and caregivers must keep that door for discussion open and let their children know that if they have questions, "they come to [them] first."

6. "Sex and sexuality are fair game for judgment."

One of the biggest barricades to healthy sexuality, according to Herbenick, is the pervasive shame that many people, but especially women, feel about sex. Young women often don't feel like they can ask questions about sex because "they might be afraid that somebody would think that they did it, whatever the thing is, and that could hurt their reputation in some way."

In more harmful situations, like sexual assault, shame about sex often prevents survivors from coming forward, Herbenick said. Even in terms of advocating for their own satisfaction, shame is so deeply ingrained among women that they often find it difficult to outwardly talk about enjoying sex or advocate for what they want.

Levkoff said she has also observed shame and guilt within parents. When she asks parents if their goal is for their children to avoid sex altogether rather than making good choices and having positive experiences, they almost universally advocate for the latter. The problem is, "parents are guilted quite often or shamed into giving the other response," she said. "They're afraid to speak up, afraid of what other people might think of them or, worse, what they might think of their children."

7. "Sex itself — and sex education by extension — is black and white."

Americans tend to go into a puritanical panic whenever the topic of sex comes up, but as these sexologists note, sexuality education is about so much more than that.

"Sexuality education, whether formal or informal, starts at birth," Levkoff told Mic. "The problem has always been that people hear the word 'sex' or 'sex positivity' or 'sex ed' and think things are very black and white. Sexuality is so very nuanced and there is so much to it that rarely includes any acts of sex, and that's usually what people fear."

As these experts have demonstrated, Americans have to start embracing the nuance of sex and sexuality. Instead of forcing sex and the feelings and identities surrounding sexuality into gendered and judgmental boxes based on myth, we must accept the fact that sexuality is a varied, healthy aspect of humanity that deserves to be discussed without shame.