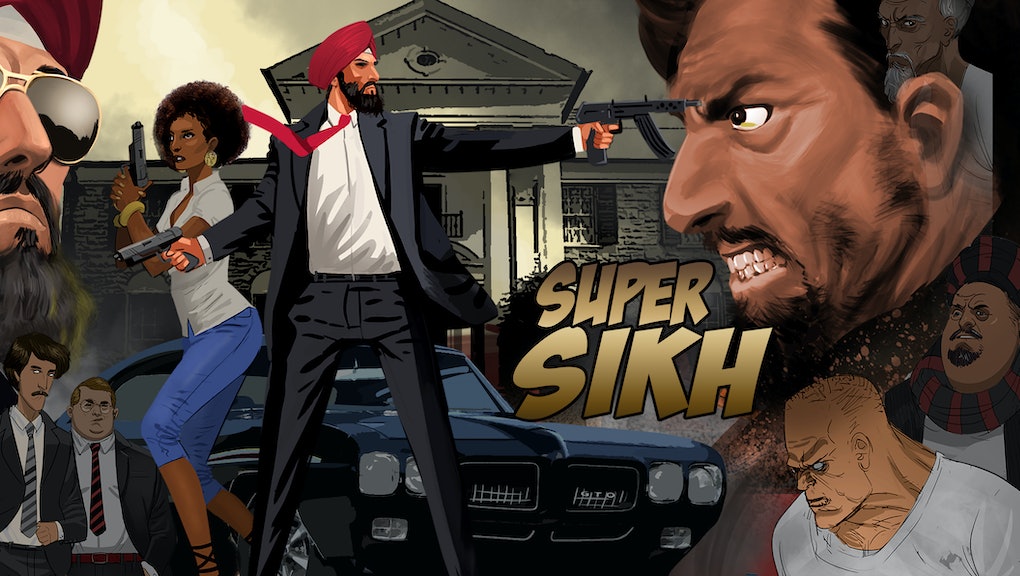 Meet the New Superhero Shattering Stereotypes About the Sikh Community

He isn't your typical Marvel superhero.

Born from a 2011 discussion between Manchanda and Alden and introduced through a Kickstarter project, which made four times its intended goal in February, the series is slated for four initial, 1000-print run issues, the first of which will be released this month. A four-page digital introductory issue is already available for 99 cents on the website.

As a cultural groundbreaker, Super Sikh has a big task ahead of him: A 2014 National Sikh Campaign survey found that 60% of Americans "admit to knowing nothing at all about Sikh Americans," and that two-thirds of turbaned Sikh children are bullied in school.

Thanks to Manchanda, Alden and Tayal, he looks more than up for the challenge.

Visibility at a time of bigotry: According to the same survey, there are 25 million Sikhs throughout the world, and about 500,000 living in the U.S. The American Sikh community has experienced heightened levels of violence since 9/11, correlated with the broader rise of Islamophobia. Super Sikh figures as a representative of Sikhism to the larger culture, and effectively challenges mainstream ignorance about the religion.

"A modern hero in a turban": Super Sikh, aka Secret Agent Deep Singh, is a superhero in the modern vein, without any super powers. This was a deliberate choice by his creators. "We chose that type of story because it encourages the reader to identify with the hero qualities — these qualities are achievable and hard-earned through training, not a freak event or supernatural version of reality," Manchanda and Alden said in an email to Mic. "In Sikhi there is the idea that success comes from the Creator's blessings. So we hope to show how our modern hero Deep Singh uses the unique blessings that are bestowed on him and puts them to work to achieve success in the modern world."

Super Sikh may prove especially inspiring to Sikh children living in American culture, who lack mainstream role models that reflect their identity. But the character can prove a role model for all, regardless of ethnicity or religion.

"More than half of Sikh children endure bullying in schools, and the numbers are worse for children who wear turbans," the nationwide survey on Sikhism in America reports. Just last week, a shocking video emerged of a Sikh child being verbally harassed on a school bus in Duluth, Georgia.

By creating visibility, the "modern hero in a turban" further educates other children about Sikhism, in turn helping to eradicate ignorance about this community. Indeed, the same Sikhism study found that once Americans actually learned about the religion, there was a 17.5% increase in positive feeling toward those who practice it.

Super Sikh is just one example of the drive to increase awareness about Sikhism in America. "There is a multi-generational movement amongst Sikh Americans to create bridges, foster understanding and create an environment that does not tolerate bigotry of any kind, toward any community of people," Sona Simran Kaur, Communications Director for the Sikh American Legal Defense and Education Fund, told Mic.

"Comics, like movies, television shows and art are expressions of culture and can act as tremendous vehicles for assimilation due to their ability to connect with mass audiences on a personal, 1 to 1 level," he said.

For Ghuman, as well as for the National Sikh Campaign, which is exploring a partnership with the comic's creators, this means Super Sikh "can be that connecting force that opens people to Sikhism while still being a great source of entertainment — a positive force battling evil, just like any other great superhero."