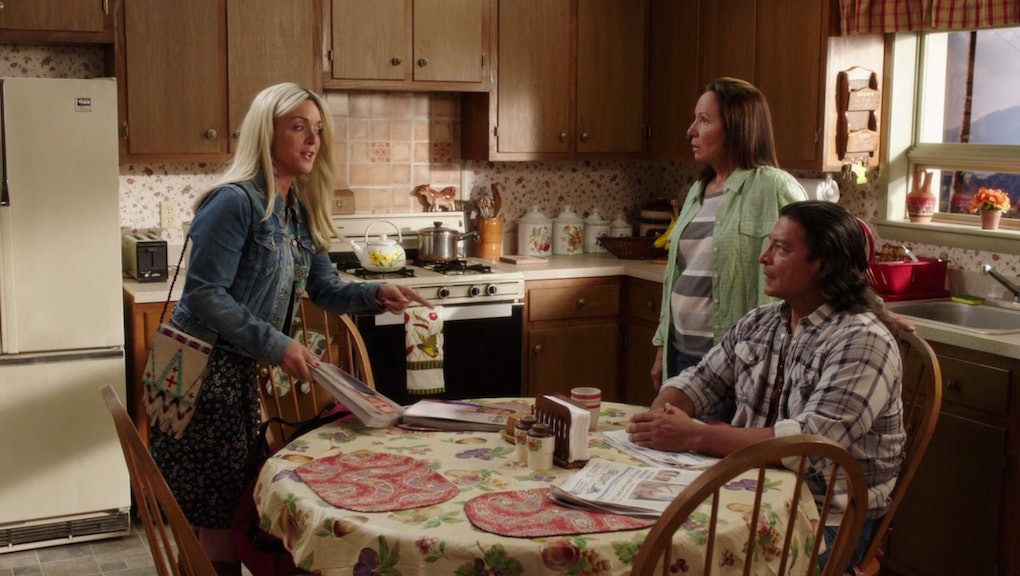 Unbreakable Kimmy Schmidt is wonderful — of that, there is little doubt. The show is mind-blowingly, astonishingly diverse, with a regular cast composed exclusively of men of color and women, and a recurring Asian cast member who serves as a love interest for the female lead. Such diversity is cause for celebration — and, naturally, controversy, with plenty of writers calling creator Tina Fey and her team to the carpet for mishandling race in the new series.

"The Unbreakable Kimmy Schmidt Has a Race Problem," Meghan O'Dea declared on Medium. At the Daily Beast, Gabe Bergado labeled it "The Dong Problem," after the show's Asian romantic interest. "What's Up With the Native American Subplot on Unbreakable Kimmy Schmidt?" Libby Hill asked at Vulture. It's enough to cause a backlash-to-the-backlash — and, right on cue, we have the Decider's Tyler Coates with a strong rebuke:

"I think what Fey and Co. do with race is quite commendable and revolutionary. For me, it's all about context and intent. For the latter, I can certainly recognize that often people are insensitive without meaning to be (the road to Hell being paved with what it is and all). But context is the most important factor when analyzing how Fey and her fellow writers invoke race to make a larger point."

Coates is in the right; much of what these writers are "missing" is built into the foundation of the show. Hill's piece — the most recent addition to the Kimmy Schmidt Backlash Canon, and possibly the most off-base — ignores the context of the show.

In her piece, Hill argues that the Native American ancestry of Jacqueline Voorhees, Jane Krakowski's character, serves no narrative purpose.

In the third episode, the audience learns that Kimmy's boss, Voorhees, is secretly a Native American. This revelation would be one thing on its own, but Jacqueline is played by the very white, very blonde Jane Krakowski. The episode includes flashbacks to her adolescence, where Jacqueline (then called Jackie Lynn) is still played by Krakowski, with lip service played to her dyeing her hair blonde and getting blue contacts — but these are subtle details.

What Hill calls "lip service" and "subtle details" someone else might call "background" and "character development." Jacqueline's background as a Native American woman who wants to run away from her heritage is the basis of her character. It informs her need to be validated by white men — specifically by her husband, but later by other characters. She sees going blonde and covering her skin with makeup as a way to assimilate and gain power. It is the foundation of her motivation and action.

"If we take the show at its word, we are laughing at a Native American woman who felt so uncomfortable in her skin and in not being a member of the dominant culture, she sold her soul to look the way she thought she should," Hill says. "That's not funny; it's disturbing."

In truth, it's both. Jacqueline is a funny character, and her background is scathing satire that calls out injustice. It is terrible that, as Hill puts it, "the pressure to Anglicize exists for so many cultures in America today." That's exactly what Fey and her team are targeting with Jacqueline's character.

After the audience finds out about Jacqueline's history, we see her grow and develop as a woman independent of her need to assimilate. She divorces her controlling husband. She grows to resist patriarchal figures. She uses bits of what she learned from her parents to navigate without a GPS. And in the finale, she decides to return home to visit her family to more fully reclaim her own voice and identity. She chooses to embrace her roots rather than continue to cover them up. That's a full character arc, not "odd" or "irrelevant," as Hill put it.

How Kimmy Schmidt handles race is still up for debate. Is Dong really an affable, lovable character, or is the foundation of his character fully grounded in a stereotypical identity that he can't shed? Is it problematic that the two Latina characters are both cleaners, or are their roles further supporting Fey and her team's satire?

There's something to be said about judging a work too quickly — the show hasn't even been out for a week, and as a result, some of the criticism is a bit half-baked. But if, after the show has had time to settle, there's a good argument about the show's treatment of its diverse characters, it can and should be made.

This isn't one of those arguments, though. Jacqueline Voorhees is a Native American character with a full arc that satirizes expectations of assimilation. Her heritage isn't a footnote; it's one of the most interesting aspects of an adventurous, exciting new show.