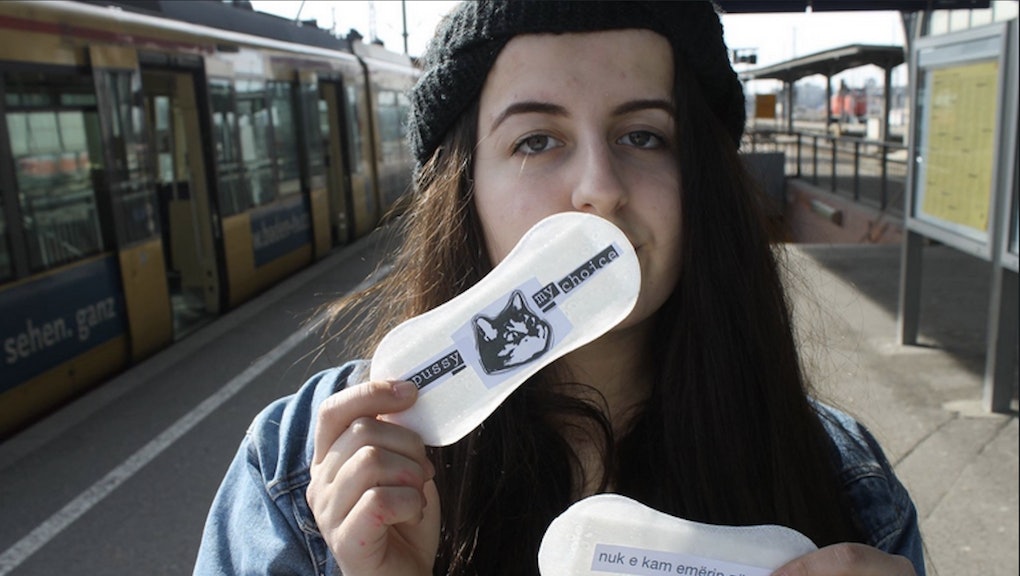 The latest in street art activism is confronting sexism in an unconventional, but wonderful, way.

A young woman named Elonë, from Karlsruhe, Germany, is paving her city with messages against sexism, street harassment and sexual abuse — all printed on menstrual pads.

Using the unfairly taboo product, Elonë achieves maximum eye-catching effect for her messages. It's already resonating: In two days, photos of the pads went viral on Instagram and Tumblr, amassing over a 100,000 hits, according to BuzzFeed.

"Imagine if men were as disgusted with rape as they are with periods," Elonë wrote on one pad, quoting a tweet. This particular message embodies the project's aim: On one hand, women's bodies are vandalized, harassed and objectified. On the other, they are often erased when it comes to the reality of menstruation: Blood turns blue in commercials, girls are encouraged to keep their periods private and this natural process treated as something embarrassing or shameful. Period-shaming is real; in fact, one of the biggest stories at this year's Australian Open involved a player alluding to her period as a factor in her match loss.

The pads are striking images that force viewers think about women's bodies in nontraditional ways — primarily, as human bodies instead of sexualized objects of desire.

The project is ultimately about equality. Elonë wrote in a Tumblr post, "feminism means equality not men hate!"

She has also been fielding myriad questions about her art via Tumblr. When one anonymous commenter asked her to donate a few boxes of pads to homeless shelters, she responded that she donates "some of them" every year, giving them to poorer women and homeless people.

Of course, not all of the reactions have been positive. Speaking in regard to vitriolic comments from trolls, Elonë noted that pads are "normal things" and, as such, she she doesn't "understand the hate messages."

It's important to note that not all women have periods. But Elonë's activism unwaveringly places women's bodies as the focus of feminist discussion, without having those bodies themselves present in the art. Women mustn't "be ashamed" of their bodies, the artist told Mic via email, and "they should never feel bad about how they look."

With feminist messages written where blood would normally lie, Elonë forces people to think about and critique how these bodies are used and abused in society.