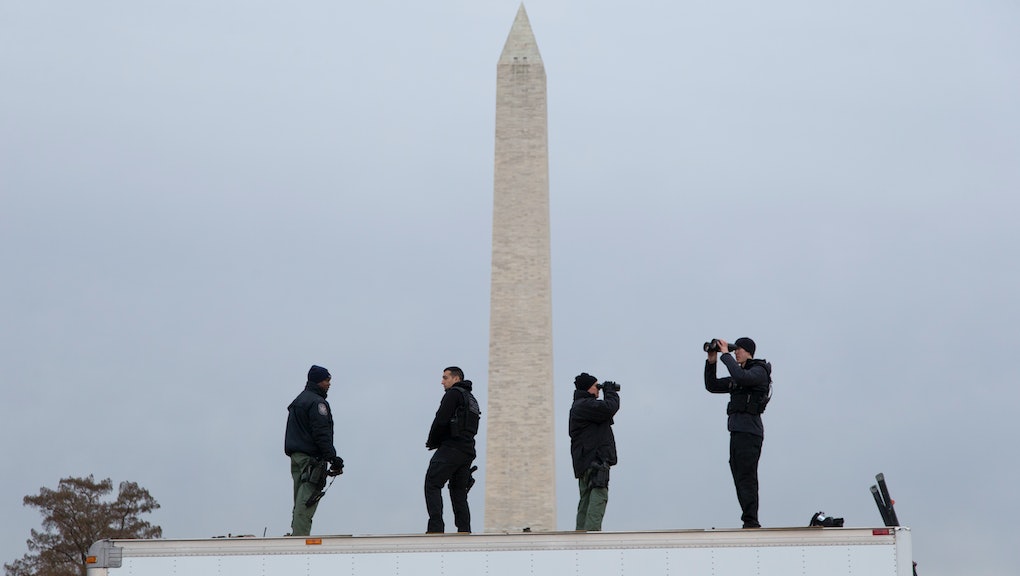 The Secret Service May Be Teaching Itself Drone Defense

The news: In an effort to prevent attacks or surveillance by Unmanned Aerial Vehicles (also called drones), the Secret Service issued a statement in February that it would be conducting a series of exercises involving unmanned aircraft systems and, at the time, gave no indication of a discernible schedule — or any particular reason for the drills.

With reports of drones flying near the residence late at night, the U.S. Secret Service has the capitol looking like a George Lucas set.

In some states, the sight of airborne robots wouldn't be a big deal. In California or Nevada, civilian drone flights are 2015's version of flying a kite over a park. In D.C., however, where the Federal Aviation Administration and Transportation Security Administration have implemented 20 nautical miles, seeing drones in the witching hours is cause for alarm.

Why they're doing this: The alleged tests started shortly after a drone was seen flying over a military site in Paris — a city still under high alert after the Charlie Hebdo shooting in January — where drones have been spotted near the U.S. embassy.

More often than not, drones belong to hobbyists trying to up their aerial videographer game. In store-bought UAVs, an included GPS unit is programmed with coordinates to avoid high-security sites like airports and government buildings. Those without such security features are kept away by other technology at those sensitive sites.

"There's passive technology being developed called geo-fencing," Tom Wilczek, an aerospace and defense industry specialist with the Nevada governor's Office of Economic Development, told Mic. Geo-fencing puts up a virtual barrier that can be used to either signal when devices cross the barrier or to turn devices around completely when they try to pass. "The idea of using a geofence would prevent the UAVs from intruding on the space. Places become no-fly zones where UAVs have no business."

So what happens next? As UAV technology improves, the legalities eed to be addressed — and so do more malicious uses. For instance, if a $1,400 drone tailored for filmmaking can carry six pounds of meth across the Mexican border with the U.S., what's to stop a smaller model from carrying a one-pound explosive to a government building, especially if one could crash-land on the White House lawn?

That, presumably, is the Secret Service's concern.

Fortunately, with any unmanned vehicle, even a homemade one without the geo-fenced GPS coordinates installed, the Wi-Fi or Bluetooth signal from the operator to the vessel can be interrupted by a process called spoofing — capturing the electronic signal and gaining control.

"The geo-fencing would keep out 80% of those curious [hobbyist] intruders," Wilczek told Mic. "For the extremely small number who have the idea to fly in with nefarious means, spoofing would be a way to detect that platform and take it over."

But of course, that takes practice, and it means two things: real-world testing to see what obstacles around Washington could slow down the Service's tracking, and an increase in flying, radio-controlled robots over the nation's capital.