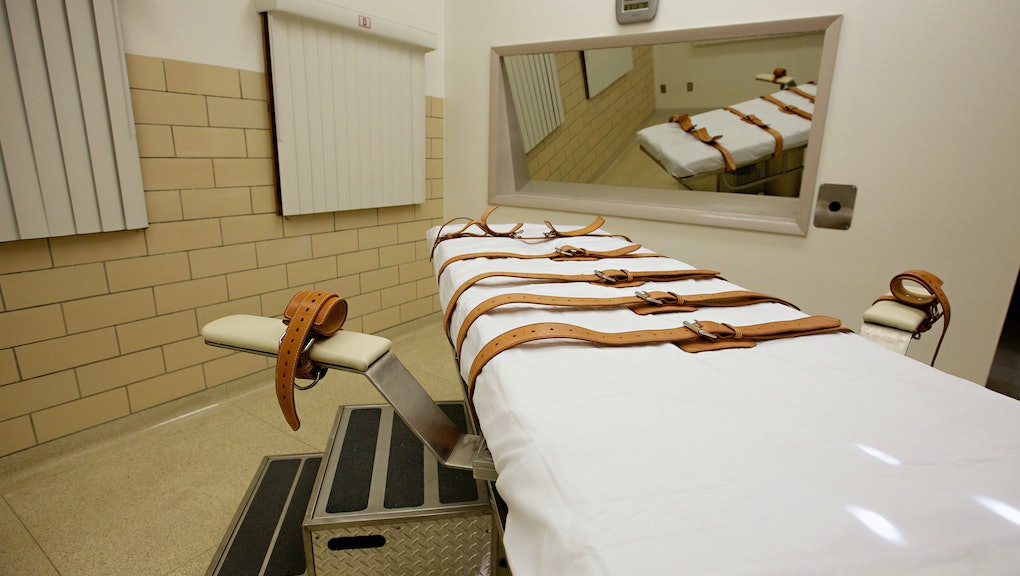 In 2008, Jodi Arias murdered her lover, Travis Alexander. Unlike the more than 14,000 other murders committed in the United States that year, the crime became one of the most bloated media events of the past two years. But for all the talk of the case and its potential death sentence, one question remains: Should we even have the death penalty at all?

After a six-month trial and a week of deliberation, jurors voted 11-1 in favor of the death penalty but, lacking unanimity, spared Arias' life. Some have noted that women who murder are typically granted more leniency than their male counterparts, and there is a fair body of academic research to support the existence of gender bias in the criminal justice system.

In their remarks to the court, some jurors apologized for the hold-out and their inability to condemn Arias to death, according to the Associated Press. She will now almost certainly be sentenced to life in prison.

While inequality in the application of justice is something Americans have come to expect, debating about whether Arias would have faced the death penalty if she were a man is the wrong argument to have. The real problem is not gender bias, but the death penalty itself.

The rest of the world: According Article 3 of United Nations Universal Declaration of Human Rights, "Everyone has the right to life, liberty and security of person." America not only signed this document but also led the committee responsible for writing it. Coming after the murderous horror of World War II, it has become a staple of international human rights law.

Today, almost two-thirds of all nations outlaw the death penalty, according to Amnesty International. America's continued use puts it in the company of human-rights luminaries like China, Iran and North Korea.

Since 1976, when the Supreme Court ended the national moratorium on capital punishment in Gregg v. Georgia, 1,402 people have been executed in the United States, according to the Death Penalty Information Center. The U.S. executed 39 people in 2013, 35 people in 2014 and 8 so far in 2015. By contrast, the European Union hasn't executed a single person since at least 1998.

When it comes to the death penalty, there's no room for error. Take the case of Cameron Todd Willingham, put to death in Texas in 2004. Many have speculated that Willingham, who was convicted of an arson that led to the deaths of his three young daughters, would have been exonerated if additional evidence had come to light at his trial.

While robbing an innocent man of freedom is terrible, that can at least be reversed. There is no coming back from an electric chair. Since 1973, 150 death row inmates have been exonerated while waiting for the state to kill them.

Racial inequality: In a dissent commenting on the 1994 death penalty case Callins v. Collins, former Supreme Court Associate Justice Harry Blackmun commented that "Even under the most sophisticated death penalty statutes, race continues to play a major role in determining who shall live and who shall die."

A 2007 report from the American Bar Association investigating capital punishment in Pennsylvania found that "one third of the African American death-row inmates in Philadelphia County would have received a sentence of life imprisonment if, in fact, they had not been African American."

Other studies have shown that African-Americans who kill white people are significantly more likely to be executed than whites who kill African-Americans. According to Amnesty International, "All-white or virtually all-white juries are still commonplace in many localities."

"It's radically unfair," said Gerety, who noted that it was virtually beyond contention that the current legal system was systemically biased toward minority defendants.

High costs: Many people might think that it's cheaper to execute someone than keep them alive in jail, potentially for decades. In reality, it's not so simple. In this case, the admirably slow-moving American justice system becomes considerably more expensive when life is on the line.

According to a Seattle University study, the overall costs of a trial, lawyers fees, miscellany and incarceration of a death row inmates in Washington State are $3.07 million. In cases where the death penalty is not sought, the figure drops to $2.01 million.

A recent Idaho study estimated that public defenders spent 44 times as much time on capital cases vs. those of life imprisonment. If time is money, you can see how the bills can add up.

It has been said that "An eye for an eye makes the whole world blind." Is Jodi Arias a terrible human being who gruesomely killed an innocent man? Yes. Was her acquittal due in part to her being a woman? Possibly. Did she deserve to die? Maybe she did. But at the end of the day, executing this woman would not bring Travis Alexander back. It would only serve to perpetuate a morally dubious and financially unsound relic of the legal past.