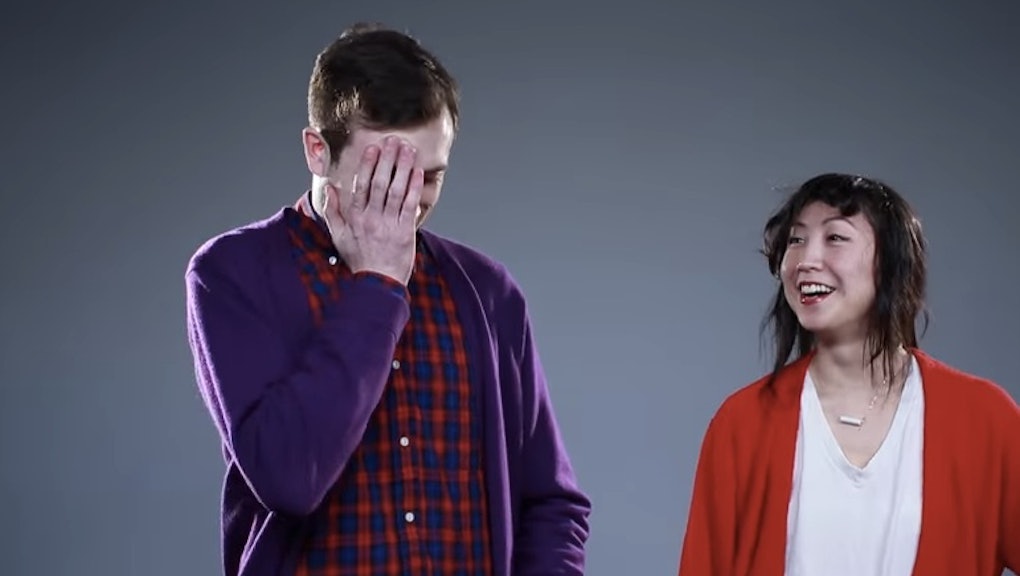 How many people have you slept with? How many has your boyfriend or girlfriend slept with?

Revealing your "number" can come with a lot of anxiety, insecurity and fear of judgment.

To put the age-old question to the test, Elite Daily tracked down 11 couples who had never had the "number" talk with their partner. When they captured the nerve-wracking conversation on camera, the responses ranged from complete shock and mortification to matter-of-fact honesty — and proved why it's a talk we don't need to fear.

The big number game: While this type of conversation usually happens behind closed doors, seeing how others answer the question reveals each person's unique worries as to whether their number's too high, too low or perhaps even too middling. It's the Goldilocks of sexual questions.

Unsurprisingly, a lot of couples had never brought up the topic because, despite how curious they might be, they simultaneously don't want to know. "That's a weird conversation to have, because you don't want to be thinking about it," said one man.

That resistance to knowing may be rooted in the fear of confronting differences, both in sexual experience or in values, between partners. "I think I've been on the more sexually adventurous side throughout my youth," explained one girlfriend. When her partner revealed he'd had 15 or 20 sexual partners, she simply responded, "I've had not 15 or 20."

"When I was in college, those numbers got stupid," one boyfriend confessed. "I played football. I was All-American. Those numbers got out of hand." This response, though playful, reflects the typical male bravado that attaches a man's ego and masculinity to his number.

Knowing there are common interpretations attached to certain numbers, we may also rationalize our digits. After one man revealed he had about 150 sexual partners — the highest of any participant — he said plainly, "I'm not afraid to admit anything about my past because it's brought me to where I am today."

Why we lie: Sometimes we don't rationalize but instead fib, a decision that reflects at least one unfortunate truth: While high numbers carry positive implications for some, it's not standard across the board, especially for women.

"I'm a girl, so I say one," said one girlfriend in the video.

That subtle but powerful "I like to say" reveals a common instinct among women: to hide their number or shrink it smaller than it really is, for fear of judgment. In fact, a 2014 survey of college students found that up to 20% of women lied about their number, while only about 12% of men exaggerated their own. Women and men often even have different opinions about what constitutes "sex," a 2001 study found, which can also impact how each gender defines their number.

It's YOUR number: We'd like to think our enlightened, sex-positive society is past the judgement that come with revealing our numbers. When Mic asked men what they thought of women's sex numbers, many responded that it simply didn't impact their feelings towards a woman. "Who gives a shit? What I feel is the past is the past and who cares how many people one person has hooked up with?" Andrew, 30 said.

In reality, we can become self-conscious and anxious about how our numbers might influence how our partners judge and feel about us.

But it's worth remembering that if our partners really care about us, they'll care that we answer the questions that are actually important. Instead of, "What does my number say about me?" we should be asking, "Am I happy with my sexual experiences? Am I healthy? Am I satisfied?"

The number itself doesn't mean anything inherently. How we feel about our own sexual past is clearly what matters. And if we're at peace and happy with ourselves, our partners should be, too — whether they know our tallies or not.