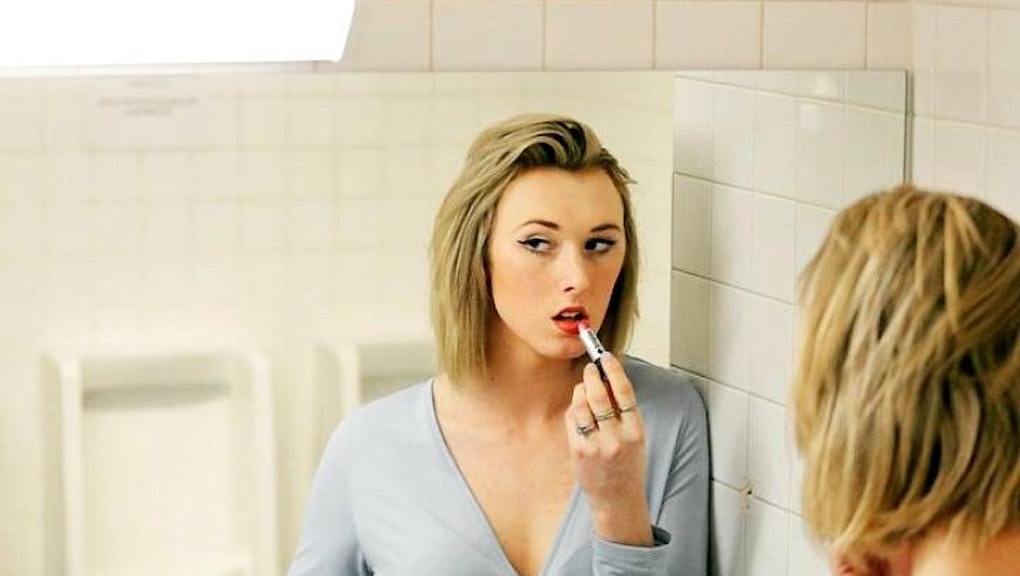 With pending bills in Florida, Texas and Canada targeting how trans people are allowed to use restrooms, one Canadian woman just took matters into her own hands — literally.

After Canada passed a bill in February making gender identity a protected class under human rights law, Sen. Don Plett proposed an amendment that would make "sex-specific" facilities, including restrooms, an exception. In response, trans rights activist Brae Carnes recently began taking selfies in men's restrooms to prove an important point: that it doesn't make sense to force people into bathrooms that aren't in line with their gender identity.

"I wanted to show how, if this amendment and bill became law, how ridiculous it would be to have these women in the men's washroom," Carnes told CBC Victoria. "I'm kind of giving him what he wants and showing him that it's out of place."

Exposing flawed logic: Many arguments for restricting usage to sex assigned at birth reflect a fundamental misunderstanding of the difference between sex and gender. Indeed, this thinking undergirds Plett's push to make "sex-specific" facilities an exception to legal protections in Canada based on gender identity.

"The issue I have is that many elements of society are separated based on sex and not on gender — shelters, change rooms, bathrooms, even sports teams," Plett said, according to the Toronto Star. "They are not separated based on internal feelings but on sex, physiological and anatomical differences. Whether or not we like the fact that men and women are biologically different is irrelevant."

But, as I've written for Mic before, "calling a trans woman a 'man' and calling a trans man a 'woman' is an act of misgendering ... that conflates the two distinct ideas of sex and gender. In reality, gender is a broad spectrum of possibilities not confined to the categories 'man' and 'woman,' although that's how the majority of people identify."

These bills undermine trans rights. These selfies highlight the importance of allowing people to determine for themselves which bathroom to use. Enforcing use of facilities based on sex assigned at birth not only demeans trans people, it also could have violent consequences: A study from the Williams Institute showed that about 70% of trans respondents experienced harassment or assault while trying to use a public restroom facility.

Indeed, there's a very real threat — and an unfortunate trend — of violence that trans people face every day while attempting to do things that their cisgender peers may take for granted. It can prove even more challenging when their gender gets policed in sex-segregated facilities, something Carnes knows all too well.

"As a trans woman I'm not even safe from discrimination at the pub or public transit," Carnes wrote in a March 7 post on Facebook. "What's going to happen if I'm forced into a men's changeroom?"

That's why many of the emerging "bathroom bills" miss the point — and why everyone would be better off if they let each other pee in peace.