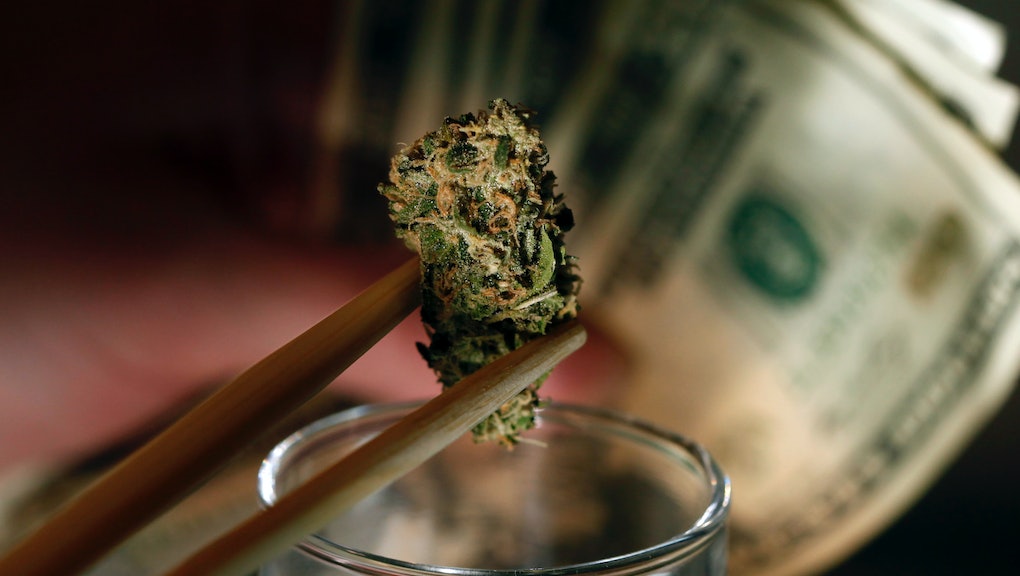 Investors Are Losing Billions in Marijuana Start-Ups — Is This the First Weed Bubble?

But many early investors in legal ganja have gotten burned big time, thanks to a gigantic bubble in marijuana penny stocks that burst to the tune of $22 billion in losses. According to Openfolio, which characterizes itself as an investment community, gambling on small marijuana startups was one of the worst bets of 2014.

"Medical marijuana is down 94.4% since its peak and has lost $1.7 billion in investor money," Openfolio representative Simon Burns told Mic via email. "Hemp Inc. is down 74% from its peak. My Marijuana Canada is down 72.92%. Totally Hemp Crazy is down 93%. Weed Inc, with the incredulous ticker OTC:BUDZ, is down 83% from its peak."

This chart provided by Openfolio tracking 128 separate marijuana penny stocks shows the collapse of the market, which dropped by 73.63% over the past year from its peak value.

It's important to note that not all of these losses are real, because some of the overvaluation never reflected actual investment. But investors did lose a lot of money.

What's happening? Penny stocks are publicly traded shares in small companies that have a low valuation. Shares aren't usually actually a penny; typically, the Securities and Exchange Commission considers any company that trades below $5 to be a penny stock. The companies trading at these low levels tend to be tiny firms with unproven potential, making them risky but inexpensive investments.

The nascent marijuana industry is full of penny stocks. "Many are legitimate companies with legitimate products," Burns told Mic in a phone interview. But some of the stocks were in "$2 billion companies with little revenue and few employees," he cautioned, adding that the "some are overhyped or very promotional or speculative. The intention of the company operators is to get the stock popped."

What Burns described was a classic pump-and-dump scheme. Unscrupulous investors or shareholders deliberately attempt to overinflate the value of a stock and sell when it peaks, leaving others holding an empty bag. In some cases, the companies have no clear business plan, while others are selling products or services that would put the Bluth family's Cornballer to shame.

How is this happening? Both unscrupulous companies and outside stock promoters are responsible for the boom in worthless marijuana penny stocks, Burns said. In many cases, ownership is deliberately obfuscated. He added that it's "often shell companies that own each other" doing the pumping and dumping.

MarketWatch flagged one such company called Growlife, which was suspended by the SEC last April for providing inadequate or inaccurate financial information to investors and suspicion of market manipulation. The SEC accused four promoters of reaping $2.5 million in profits in Growlife and Hemp Inc. after they "bought inexpensive shares of thinly traded penny stock companies on the open market and conducted pre-arranged, manipulative matched orders and wash trades to create the illusion of an active market in these stocks."

Burns told Mic that stock promoters pushing bogus shares well beyond their actual valuation intentionally hide their identities. He said that scammers use email scams, disseminate unfounded rumors and release fake promotional materials to fool potential investors. The dangerous part is that this shadowy operation style can lead to some unreasonably high valuations that are ultimately empty.

"Stock promoters are selling disingenuous stories and revenue projections for marijuana companies which results in inflated valuations of up 100 times revenue and higher," Burns said. "For context, the average technology IPO goes public between a 10x to 20x revenue multiple."

Why it is happening? To be sure, the problem doesn't lie in marijuana as a product in and of itself. With public opinion swinging dramatically in favor of marijuana legalization, it seems like weed has a bright economic future. But it's exactly this optimism that can fool investors into making unwise bets on overhyped companies that have yet to demonstrate any real money-making potential.

Unlike previous speculative bubbles, the marijuana industry is particularly volatile because national banks won't touch the industry with a 10-foot stick. As long as weed remains illegal on the federal level — and there's a chance that a new presidential administration in 2016 will reverse the Obama DOJ's hands-off policy on state legalization measures — big financial institutions will remain wary of getting involved in the marijuana market.

This has led many companies to seek alternate sources of capital funding, Burns notes, such as a company's going public prematurely in order to raise funds through an IPO. Proposed interim solutions to this problem have included setting up an alternative banking system, which could let weed businesses operate more like traditional ones.

Volatility in the marijuana markets is another sign that while weed is a hot topic right now, it still has a long way to go before it will become an established and regular part of American life. A few decades from now, the surge in marijuana penny stocks might look a lot like the Internet bubble: too much hype for an idea that wasn't quite yet ready for primetime. But just like the Internet recovered after its initial burst, the same success may come to marijuana years from now.