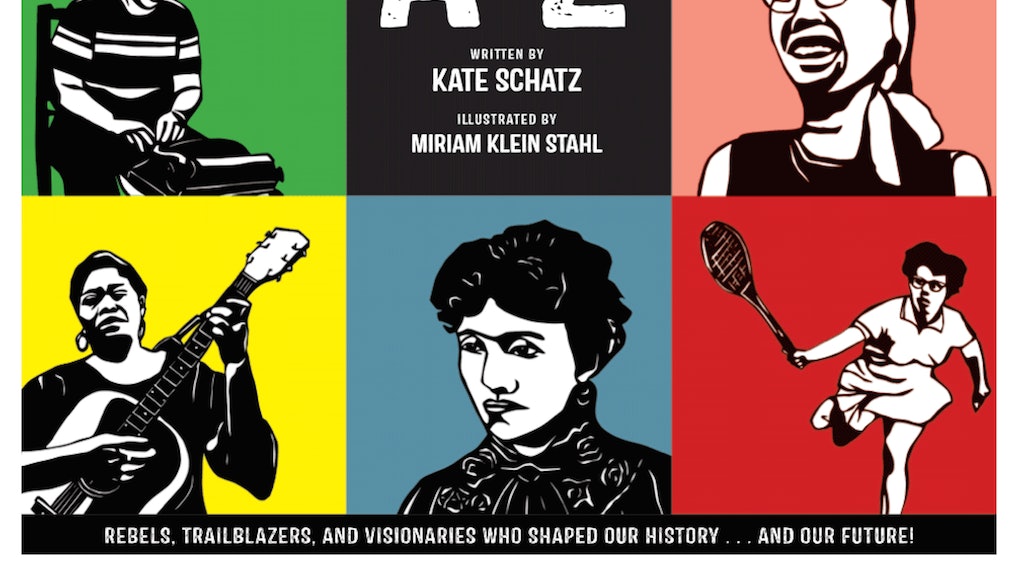 A new book might be the most radical way to learn your ABCs yet.

Rad American Women A-Z, written by Kate Schatz and illustrated by Miriam Klein Stahl, is the first children's book to be published by the legendary City Lights in its more than 60-year history — and with great reason. The book is an illustrated introduction to American women's history based around the alphabet.

From A (Angela Davis) to Z (Zora Neale Hurston), this isn't your typical kids, or history, book. Over half the historical figures are women of color, and queer women, both lesbian and trans, are featured as well.

Inspired by her 2-year-old daughter, Schatz told Mic that the book is intended to fill the "feminist-shaped hole in children's literature."

Schatz's definition of feminism is inclusive of women of all colors, gender expressions and sexualities.

"I wanted to focus on the stories that aren't always part of the standard telling of women's history," Schatz said in a press release. "With all respect to Susan B. and Rosa and Helen and Gloria, I want to try to introduce readers to women they aren't likely to have heard of."

Indeed, the book's elevation of marginalized women adds necessary breadth and depth to mainstream narratives about women. And while intended for children, this visually stunning and counterculturally informative enterprise will make adults want to buy a few copies too.

The book's popularity and critical acclaim highlight the growing power of a feminist consumer market. "In terms of the broader zeitgeist," Schatz told Mic, "the fact that so many people are so excited about this book definitely indicates that we're at a place where people are less scared of the word 'feminist' and more interested in amplifying the voices and stories of women and girls."

From Supreme Court Legos to coloring books, more products are catering to blossoming feminists (and their parents). Rad American Women A-Z helps fill a gap in feminist education in a unique, colorful way.

"There is a big shift happening right now in children's/young adult literature, from anti-princess books to the #WeNeedDiverseBooks movement," Schatz said. "It's exciting, and it feels like there's a much-needed and long overdue consciousness around race and gender in books for young people."

Teaching girls the meaning of "rad": These women are "radical" in every sense of the word. As Schatz and Stahl write in the book's introduction, "radical" means "from the root." So, they continue, "a radical can be a person who wants to make big changes in society," as well as someone who is "cool" or "awesome."

"There are many ways to be rad," Schatz said. "You can be a radical activist and fight for change — or you can be an artist following a dream, a pilot determined to learn to fly, a young lawyer dreaming of the Supreme Court." At the word's foundation, she said, are a few fundamental qualities: "confidence, determination, creativity and a commitment to equality and justice."

As a pedagogical tool, focusing on the definitions of "radical" teaches young girls that it is "cool" to be activists and feminists. Kate Bornstein, who is featured in the book, articulated this inspirational element in her praise of the book on its website: "To see cartoon-me positioned (alphabetically) amongst so many of my women heroes and role models ... well, I just broke down and cried. Happy tears. I surely hope that this one-of-a-kind collection of radical American women reaches the hands of all children who want to grow up and become amazing women."

Rad American Women A-Z will be published by City Lights on Mar. 23. In the meantime, check out more of its inspiring pages below.