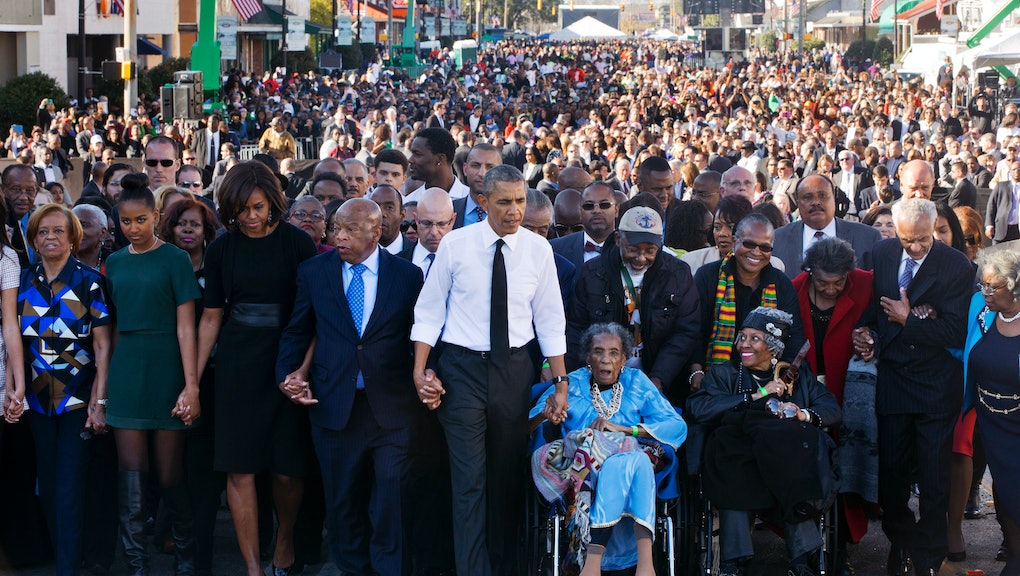 The Unfinished Work of Selma

This past weekend as I introduced President Barack Obama on the steps of the Edmund Pettus Bridge in Selma, Alabama, I was overcome with powerful emotions. Of course, I reflected on how far we have come over the past 50 years. But one thought could not escape my mind: Those who fight to make it harder to vote don't know what it's like to be kicked, clubbed, and beaten for the simple right to cast a ballot.

Fifty years ago, I, with 600 nonviolent protesters, marched on Selma to protest voting discrimination, and the death of Jimmie Lee Jackson, a civil rights activist who had been beaten and shot by Alabama state troopers a month earlier. We were met with heavily armed police, tear gas, bullwhips and billy clubs. But we fought on, we made our voices heard and we forced our nation to stare its soul in the mirror.

One week later, President Lyndon Johnson stood before a joint session of Congress to declare that if our nation were to truly live up to its promise as a land of equal opportunity, we must overcome the crippling legacy of bigotry and injustice.

Five months later, we passed the Voting Rights Act, which stated that the practices aimed deliberately at keeping blacks from voting would not stand.

On the day it passed, I would have been in utter disbelief to know that in 2015, the VRA would still be a point of debate. But in 2013, the Supreme Court gutted key aspects of the law. In the weeks that followed, Republicans in statehouses across the country quickly passed laws making it harder to vote. In Texas, the state's Republican attorney general announced immediately after the Supreme Court's decision that a law blocked in 2012 because it was found to burden the poor and communities of color would go into effect. In North Carolina, the legislature pulled back early voting. In fact, since 2011, half of the states have passed legislation to make voting harder.

Couched in language about "protecting the ballot box," Republicans have pushed voter ID laws that disproportionately impact certain blocks of voters — African-Americans, women, Latinos, the poor and young people — who tend to vote against them. In Texas alone, 600,000 voters were at risk of being disenfranchised by the new voter ID requirements.

We should not mince words: These are poll taxes by another name, the very types of discrimination we marched against 50 years ago.

I began working on this issue when I was a student, and I can tell you that this voter discrimination is not targeted at just anyone — if you're a young person, it's targeted directly at you. You need not look any farther than Texas, where a gun license is valid identification, but a student ID is not. And according to one study, even in states without ID requirements, nearly two-thirds of young, black voters were asked for ID, compared to just under 43% of young white voters. In fact, a survey found that 20% of young people lack a current in-state driver's license.

These numbers seem grim, but I bring them to your attention not to discourage you, but to the contrary, to challenge you. A new generation of activists has made it clear that the unfinished work of Selma, of Birmingham and of Greensboro will continue today in Ferguson, New York and Cleveland. We raise our voices to say that we will not allow our progress to be rolled back, that we will continue to march forward and that we know the unavoidable truth that black lives matter.

We have never solved a problem in this country with less democracy, and so the persistent efforts from some in political power to restrict the right to vote should be a call to action for us all. This week we have reflected on Bloody Sunday not to celebrate a battle long since won. Instead, we are reminded that the struggle we fought for, we marched for and some died for continues in this very moment.