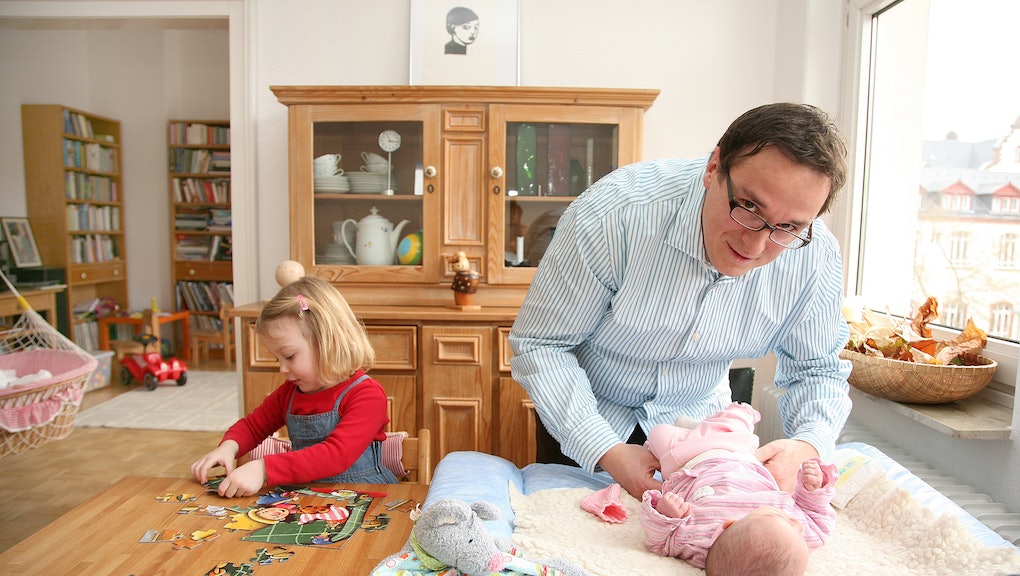 We pay a lot of attention to the obvious ways in which gender roles structure our daily lives. Women still do more housework than men, for example, and men are still largely expected to be household breadwinners.

But sometimes these roles are so deeply embedded that they go unnoticed, even when they're right under our noses.

This weekend, actor and new father Ashton Kutcher noticed one such example: the frequent lack of diaper changing stations in men's public bathrooms. The actor took to his Facebook page to share this frustration with his 18.7 million fans. In doing so, he sparked an enthusiastic conversation, judging by the more than 236,000 likes, 11,900 comments and 10,650 shares the post has generated.

Kutcher is hardly the first person to raise this issue. But while it seems like a simple problem, and is one that lawmakers, entrepreneurs and activists have all tried to address in the past, the fact that few public male restrooms have changing tables points to the bigger issue of our society's persistently sexist beliefs about women and child care.

Here are just a few reasons why we need to take this call to action seriously.

1. Single and/or stay-at-home dads should be able to take care of their children.

Considering that single fathers are actually on the rise (in fact, they have increased ninefold since 1960), we must acknowledge their ability to adequately care for their children. Single fathers (and single parents in general) face plenty of financial and emotional challenges in their attempts to raise children alone, and single as well as stay-at-home dads face additional stigmas that position them as lazy or effeminate. They hardly need this added barrier of impracticality.

2. We can't erase the experiences of gay parents.

According to a 2012 study, LGBT parents are raising nearly 2 million children in the U.S. The fact that changing tables aren't available in men's bathrooms erases the experiences of many male parents in this country, and ignores the basic needs of the millions of children they're raising.

3. Any dad who wants to step up should be able to do so.

There's been a clear call in recent years for men to become more involved members of their families. Men are paying attention: They're discussing their need to spend more time with families, and taking steps to do just that. Persistent social barriers, such as peer judgment and general stereotypes about gender and care, continue to place the brunt of child care responsibilities on women and potentially inhibit more men from stepping up. There's no reason to add literal structural barriers into the mix.

Part of advocating for an evolved understanding of gender is accepting that men can be caregivers too — not just in their own homes, but professionally as well. While the overwhelming majority of domestic workers are women, there has been an increase among families hiring men to take care of their children. Child care company Nannies4Hire, for instance, saw a 10% increase in male nanny hires between 2013 and 2014, according to Crain's New York.

This trend is evident in pop culture as well: The married couple Gloria and Jay hire a "manny" on Modern Family, for example. In order to buck gender stereotypes related to the child care profession, it's important to make the requirements of the job possible for men to complete, too.

5. We need to take the expectation of child care off of moms.

According to a 2013 study, in households with children under the age of 6, women devoted an average of one hour of physical labor to their children every day, while men only devoted 26 minutes. The same study found that not only did women do more child care, but they also had less leisure time; men were more likely than women to participate in sports, exercise, or recreation on any given day.

This gendered expectation of care is hardly fair on a personal level of equity, but is particularly burdensome for working women. It was even given a name: the "second shift," a phenomenon coined and explored by scholar Arlie Hochschild. The expectation that women take on the majority of child care responsibilities is already ingrained enough on a social level — it doesn't need to be ingrained into our public infrastructure.

So step up, architects. Men are perfectly capable of handling a dirty diaper. Let them.