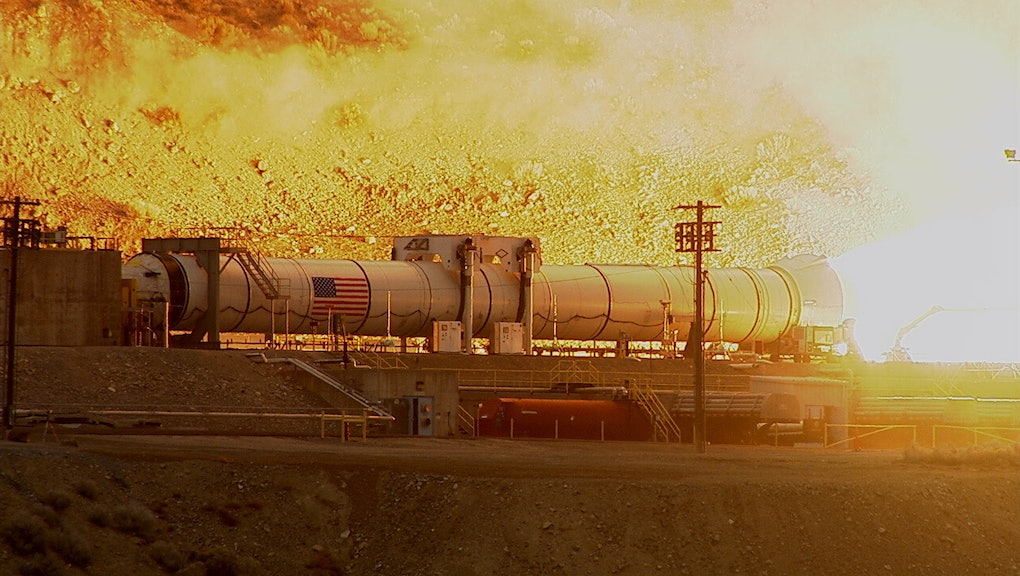 NASA just successfully tested a 1.6-million-pound, 177-foot long engine in the middle of the Utah desert. It's the biggest, most powerful booster rocket ever created — and it might just get us to Mars.

It will take two of these solid-fuel boosters — plus four RS-25 engines, the kinds used for the Space Shuttle — to get NASA's Space Launch System rocket and Orion spacecraft beyond Earth's atmosphere to reach deep-space targets, the most important of which involve searching for the prospect of colonization with missions to Mars and an asteroid. Take a look at the rocket engine in action:

For the sake of scale: The test was meant to see how the booster would stand up to performance requisites, like thrust — which is important, since one engine generates 3.6 million pounds of it (for reference, a modern 747 engine generates 66,500 pounds of thrust).

"These two qualification tests are major steps in getting the booster certified for the first two flights of SLS and another step closer on the journey to Mars," SLS Boosters office manager Alex Priskos said in a NASA release about the tests.

It took at least a month to heat the booster's solid fuel to 90 degrees Fahrenheit, the high side of a uniform temperature necessary to make sure the fuel burned at the right pace (a second test, to take place in 2016, will be done at 40 degrees).

"Outside temperatures are something we have to watch, but just like it takes a long time to heat the booster, it takes a long time to get the temperature back down," Mat Bevill, deputy chief engineer in the SLS Boosters Office, said in the release. "That's why we target the highest temperature condition for testing. This isn't a new concept — we've always conditioned to a certain temperature. We basically know ahead of time how the booster will respond, but we still watch and make sure it performs the way we think it will."

A successful test like this could mean a giant leap for NASA's efforts. NASA's Dawn spacecraft recently became the first to reach orbit around the dwarf planet Ceres, a formerly classified asteroid in the asteroid belt between Mars and Jupiter. In 2015, another unmanned mission to Mars will put science tools on the planet as new means of learning about the formation of rocky planets like Earth.

And that's just the inner solar system. NASA's proposed mission to Europa, an exploratory voyage to Jupiter's moon, is a 390 million-mile one-way trip with a price tag of $2.1 billion. But after observing plumes of water vapor from the south side of the moon, it could also be a way to search for signs of alien life, which NASA says might exist in an ocean beneath Europa's icy crust.

But first, NASA has to get its $18.5 billion budget request approved by a Congress already prone to corner-cutting what is already just a sliver of itself, headed by a man with a track record of less-than-ideal interaction with the space agency.

Still, with the technology quickly coming to light, conducting long-range, in-depth, deep-space research missions to the far ends of our solar system is more possible now than it's ever been before — and improving on this colossal feat of engineering will continue to push us farther into the universe.

"NASA is firmly on a journey to Mars," NASA Administrator Charlie Bolden said in the 2016 budget release. "Make no mistake, this journey will help guide and define our generation."