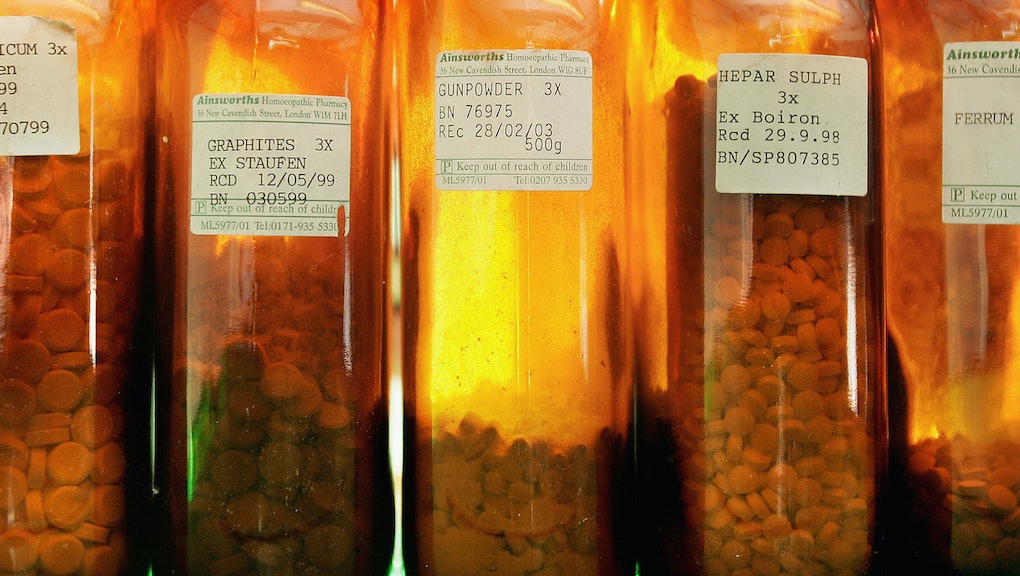 Those are the findings of a new review by a top Australian medical research program. Australia's National Health and Medical Research Council, which conducted 57 "systematic reviews" containing 176 individual papers, carefully evaluated the best research on homeopathic medicine and found no credible evidence that it treats any medical condition.

"There was no reliable evidence from research in humans that homeopathy was effective for treating the range of health conditions considered," the researchers write. "No good-quality, well-designed studies with enough participants for a meaningful result reported either that homeopathy caused greater health improvements than placebo, or caused health improvements equal to those of another treatment."

Based on the evidence provided in the review, the team concluded "there are no health conditions for which there is reliable evidence that homeopathy is effective."

In other words, homeopathy is bunk.

The background: Homeopathic remedies are a form of alternative medicine in which various substances are diluted to extremely low concentrations, sometimes so low that scientists cannot detect any traces of the original molecules. Homeopathic practitioners claim that the dilution process captures the vital energy of substances. Many believe in a variety of scientifically unsubstantiated ideas, like "the law of the infinitesimal," which claims that the weaker the dilution, the stronger its therapeutic value, and "miasms."

Dr. David S. Seres, director of medical nutrition and associate professor of medicine at Columbia University Medical Center's Institute of Human Nutrition, told Mic that the study was yet more evidence that homeopathy is a useless alternative to experimentally validated medical treatments.

"This analysis looked at existing studies that compared homeopathy to both placebo and standard treatments," Seres said. "What this says is that it is not in your best interest to depend on homeopathic treatment when there is proven medical therapy."

He added that while homeopathy was not in and of itself harmful, claims about its effectiveness can certainly be misleading and, in turn, ultimately harmful to the patient's overall health.

"The amount of the substance given, if the product is properly made, is so tiny as to cause very little risk if taken as directed," Seres said. "On the other hand, if people decline standard medical therapy that's proven and choose these unproven therapies, they might be shortchanging their health."

By doing this, people who choose homeopathic remedies to treat their illnesses can easily ignore the best available evidence on what might actually help them. One study published in the Journal of Law, Medicine & Ethics even concluded that such a situation could lead to "counter-therapeutic outcomes, including the causing of deaths." It advised that homeopathic practitioners be denied registration status to avoid lending the profession a "legitimacy that it does not warrant."

In response to the study's claims against homeopathic treatments, National Center for Homeopathy  executive director Alison Teitelbaum told Mic via email that while they don't comment on specific research reports, they "represent a community of over 12,000 consumers who have found homeopathy significant enough in their lives to pursue more information about it."

Of course, that might not matter to some people: Just like with anti-vaccine truthers, people who truly believe in homeopathic remedies are resistant to outside evidence. But Seres says the evidence behind the latest study is rock-solid.

"This was done extremely rigorously and following all the right rules for making these combinations of studies," he told Mic. "The apparent rigor of what was done makes it believable. It gives it credibility."

However, over in the United States, there exists what could charitably be called a lax regulatory environment for alternative medicine manufacturers who market their products as dietary supplements. Thanks to the 1994 Dietary Supplement Health and Education Act, which the National Center for Complementary and Alternative Medicine backed, companies that produce homeopathic remedies (as well as other junk treatments) generally do not fall under the jurisdiction of the FDA.

The Skeptical Inquirer's Dr. Steven Novella, a Yale University School of Medicine neurologist, writes, "The deal that DSHEA and NCCAM made with the public was this: Let the supplement industry have free reign to market untested products with unsupported claims, and then we'll fund reliable studies to arm the public with scientific information so they can make good decisions for themselves. This 'experiment' (really just a gift to the supplement industry) has been a dismal failure."

Seres said that these regulatory loopholes were supported by the same kind of true believers that don't have an interest in dispassionately evaluating scientific information.

"Generally speaking," he said, "the outcry that occurs when regulation is considered for alternative or complementary therapies is such that ... Let's put it this way: There were more letters written to urge Congress to pass this dietary supplements law then to complain about the entire Vietnam War."