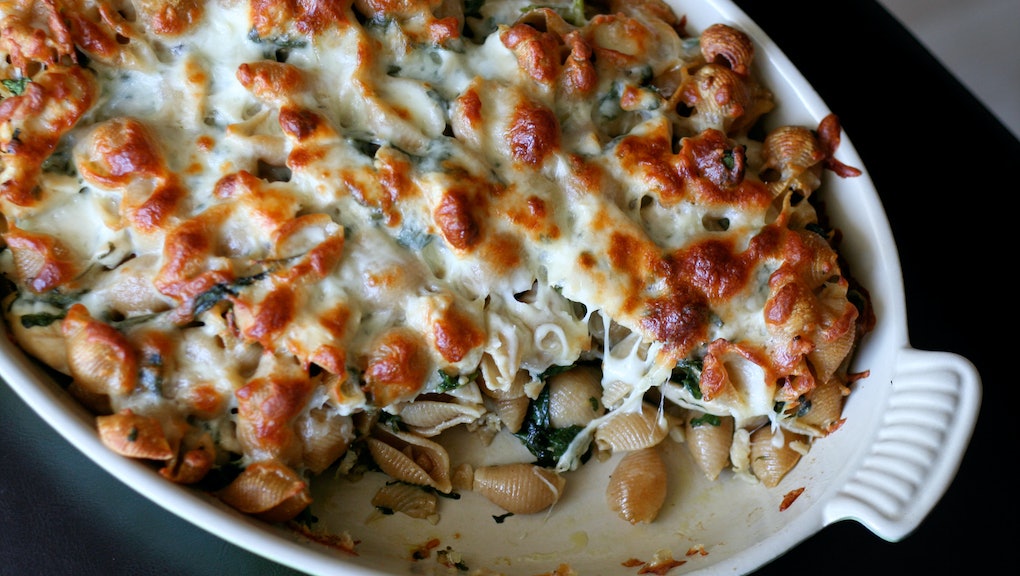 If You're Basically Addicted to Cheese, There Could Be a Good Reason Why

Each year, Americans consume over 35 pounds of cheese per person. In addition to those bricks of cheddar in our fridges, we're eating cheese melted on pizza and quesadillas, folded into sandwiches and omelets, sprinkled on veggies and pasta... well, we don't need to tell you.

While cheese is delicious, taste may not be the only reason we're eating so much of the melty, fatty stuff. Cheese, as it turns out, may also be addictive.

The science: A recent University of Michigan study investigated which items serve as the drugs of the food world. Lo and behold, pizza topped the "addictive" list. So what makes it so hard to just have one slice?

The key quality of addictive foods, the study found, was processing: Unprocessed foods like salmon or brown rice were not associated with addictive eating behaviors, while highly processed foods like French fries and potato chips were. And many processed foods have one thing in common: fat. "Fat seemed to be equally predictive of problematic eating for everyone, regardless of whether they experience symptoms of 'food addiction,'" Erica Schulte, one of the study's authors, told Mic.

At the top of the list of fatty, processed foods are items with cheese, including pizza. And as it turns out, in addition to sugar of the tomato sauce and the carbs in the crust lighting up our brain's dopamine receptors (the chemicals often linked to addiction), there's a specific ingredient in cheese that gets us hooked — a chemical called casein.

What's the deal with casein? Cheese, a highly concentrated form of dairy, has the added kick of casein, a protein found in all milk products. According to Dr. Neal Barnard of the Physicians Committee for Responsible Medicine, casein "breaks apart during digestion to release a whole host of opiates called casomorphins." Multiple studies have shown that casomorphins interact with opioid receptors, which are involved in controlling pain, reward and addiction in the brain.

In milk, casein has a minuscule dosage. But producing a pound of cheese requires about 10 pounds of milk — and the substance that coagulates the solid milk fats and separates them from the liquids (also called whey) is none other than casein. The more casein, the more casomorphins.

According to the University of Illinois Extension Program, caseins makes up 80% of the proteins in cow milk. While it's still debated just how much of an opioid effect casomorphins have, some food scientists go so far as to describe cheese as "dairy crack," as Barnard did in the Vegetarian Times. Despite these early findings, few scientists have looked into this area of research. According to Wells, it's likely due to a lack of funding. "It's certainly not in the interest of the dairy industry to further explore the topic," she said.

Hooked on cheese: Though some companies produce casein-free vegan "cheese," most of us are eating 35 pounds a year of what may be the real opium of the people. And that "addiction" has only spiraled.

Since 1970, Americans have more than tripled our cheese consumption. While we eat cheese at home more often, we're also embracing it at restaurants and fast food joints that reel us in with extra-cheesy specials. Taco Bell doesn't just have variations on a "cheesy burrito," they now have the "quesarito." (Pro tip: Chipotle will make a quesarito if you ask for it.) If that doesn't float your boat, how about the cheese-stuffed crust on Pizza Hut's "ultimate cheese-lover's pizza"?

While it's casein that may make it hard to cut back, opiates aren't really cheese's biggest problem. Last year, a study revealed that high-protein diets (mostly from eating a lot of meat and cheese) can have health effects similar to smoking. Those who had too much protein had shorter lifespans and a higher risk of cancer than those with a low or moderate protein intake. For decades, cheese has also been linked to heart disease, although the claims are (thankfully) still being debated. That said, cheese isn't exactly a low-fat item.

But hey, acknowledging we're addicted is the first step. Plus, in moderation, a little bit of cheese may actually be good for us. It's impossible to know exactly how much cheese turns one into a cheese junkie. But we can know why we're hooked — and why we're going to continue to ask for extra cheese on our pizza.