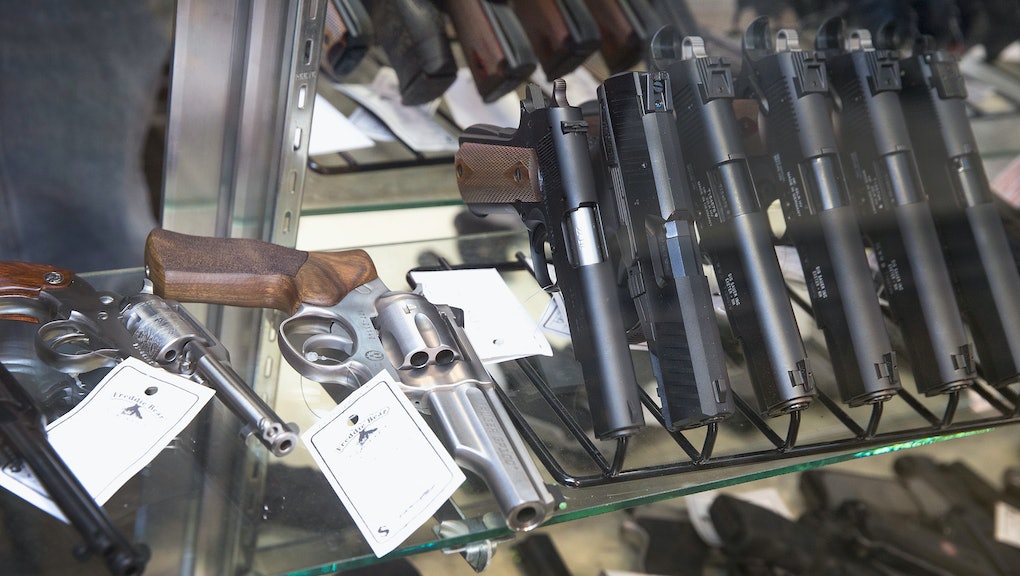 There are between 270 million and 310 million guns in the United States, according to the Pew Research Center. As Pew points out, that's about one gun for every man, woman and child in the country. But according to the results of a new national survey, more and more of those guns belong to fewer and fewer people.

According to the General Social Survey, a 3,500-page collection of facts and figures published by the National Opinion Research Center, American gun ownership is now roughly at its lowest level in almost 40 years.

The data: In 2014, roughly 32% of American households reported owning at least one firearm, down from more than half between 1976 and 1982, according to NORC. The center also reported that 39% of white respondents reported owning guns, while only 18.1% of black responders did, and that gun ownership spiked significantly as the income levels of respondents increased. NORC attributed the drop primarily to a decline in the popularity of hunting — according to the U.S. Fish and Wildlife Service, the number of hunting licenses, tags and permits stamps issued to American hunters decreased from 21,621,584 in 1969 to 2,954,757 in 2013.

How can we have more guns than ever, but fewer gun owners? Because those who do own guns own a lot more than they used to. It's part of a longer trend: According to a study published in the Injury Prevention Journal, the top quintile of American gun owners possess roughly 65% of America's guns. Part of that is due to guns being marketed to people who already own guns: Since most firearms advertisements are placed in publications read by gun enthusiasts, they're the ones most likely to purchase the newest model. Additionally, guns are viewed as a "specialty item" by many who carry. A gun that can take down an elk isn't going to be as useful for shooting rabbits.

The National Rifle Association has done all it can to ensure that whoever is buying guns has unfettered access to them. When President Barack Obama tried to revive the the Assault Weapons Ban in the wake of the shootings in Newtown, Connecticut, where 20 children and six adults were killed, the NRA stopped him cold. Attempts by the Bureau of Alcohol, Tobacco, Firearms and Explosives to ban armor-piercing bullets have also been stymied by the NRA and its vocal 3.1 million-person membership.

The NRA has dominated so completely that new gun legislation is now pushing the envelope into what once might have been unthinkable. In 2014, Georgia Gov. Nathan Deal signed a law potentially allowing guns in school zones, churches and even bars. Deal, an A-rated NRA-backed governor, was quoted on CNN saying it was "a great day to reaffirm our liberties."

Since the late 1990s, Americans have become more and more suspicious of gun control. According to the Pew Research Center, a slim majority of Americans now believe it is more important to protect gun rights instead of pursuing gun control. After Obama's election to the presidency, gun dealers reported sharply increased sales from Americans fearful of new laws restricting ownership. The election also roughly coincided with Pew data showing a sharp drop in support for gun control.

What's going on here? "The NRA's power has never come from a majority of Americans," Ladd Everitt, director of communications at the Coalition to Stop Gun Violence, told Mic. "When you get into the policies that the NRA pushes for, they don't enjoy majority support." Even so, Everitt applauded the organization's skill at political organizing.

Americans do still feel uncomfortable with specific measures like allowing guns in shops and restaurants and open carry laws. Everitt also pointed out that the Pew language was potentially biased: "'Rights' is a term with very positive connotations, while being 'controlled' is not a popular notion on any level." He speculated that changing the language would have resulted in different outcomes.

The NRA also may be benefiting from larger trends of gun violence. Despite a seemingly endless succession of mass shootings, America is actually a lot safer than it used to be. Murders in big cities are at their lowest levels since the 1960s, according to police data.

Depending on where you stand, any number of sharply different conclusions could come from the NORC data. Is America abandoning firearms, or are we a country of gun nuts? The only thing that seems certain is that the debate between "gun rights" and "gun control" won't be going away anytime soon.