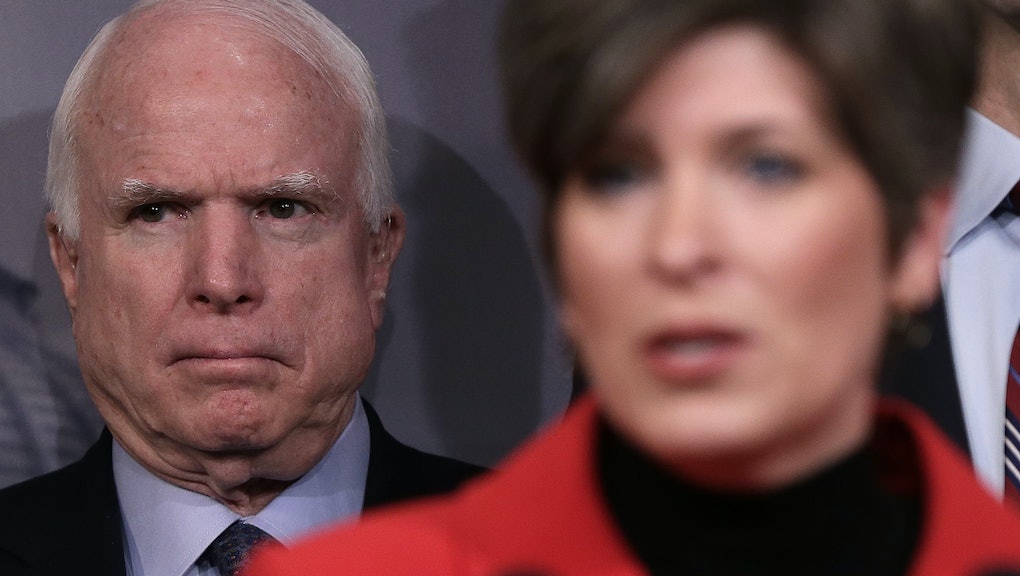 "Treacherous." "Juvenile." "Plainly stupid." These are a few of the kinder adjectives critics have tossed out to describe the "open letter" first-term Republican Sen. Tom Cotton of Arkansas recently wrote and addressed to Iranian leaders attempting to negotiate a nuclear deal with the Obama administration.

Cotton has been alternately dismissed as a foreign policy naif and accused of conspiring with defense contractors to goad the U.S. or Israel into bombing Iran. Democrats, a number of Republicans — including the seven senators out of 54 who chose not to put their names on the letter — and countless analysts and opinion writers from across the political spectrum seemed to join together in a rare moment of shared umbrage.

But is this really the kind of unprecedented diplomatic skullduggery the pearl-clutching masses fear? Or is there something less toxic at play — something, perhaps, entirely natural?

Allow one of the letter's foremost signatories, the senior senator from Arizona and 2008 Republican presidential nominee John McCain, to walk you through it:

"It was kind of a very rapid process," McCain told Politico, attempting to explain how his name ended up on a piece on a rogue communication submitted to the attention of the "Leaders of the Islamic Republic of Iran." "Everybody was looking forward to getting out of town because of the snowstorm. I think we probably should have had more discussion about it, given the blowback that there is."

And there you have it. The 28-year Senate veteran, a war hero and the chairman of the Senate Armed Services Committee said he signed the letter — rather than discuss, debate or even give it a critical reading — so he and his colleagues could beat the traffic out of Washington D.C.

To paraphrase from the close of the offending missive, the GOP's latest ham-handed attempt to scuttle the historic talks, McCain's explanation should do a lot to "enrich your knowledge of our constitutional system and promote mutual understanding and clarity" on the bizarre and often banal motivations that fill the halls of American political power.

About that letter: Nothing described above is meant to suggest the letter itself was anything better than odd or self-defeating.

Writing in the voice of a helpful fourth-grade social studies teacher, Cotton sought to explain to the Iranians why they couldn't trust President Barack Obama or his emissaries.

"In the case of a treaty, the Senate must ratify it by a two-thirds vote," he wrote. "A so-called congressional-executive agreement requires a majority vote in both the House and the Senate (which, because of procedural rules, effectively means a three-fifths vote in the Senate). Anything not approved by Congress is a mere executive agreement." And that he warned — erroneously — could be dismissed by a future president or "modified" in a new Congress.

As it turned out, Cotton's letter missed the mark on several fronts. To start, the given explanation does not accurately define how these deals work. President Barack Obama is not required to receive congressional approval to cut a diplomatic deal with a foreign government. Obama and his 42 predecessors have all done plenty of it without kicking up much of a fuss in Congress. As importantly, a future commander-in-chief cannot simply "revoke" this kind of agreement "with the stroke of a pen."

The flaws in Cotton's explainer were highlighted by, among others, the Iran's foreign minister and chief nuclear negotiator Javad Zarif. The U.S.-educated diplomat and owner of a masters degree in international relations from the University of Denver, probably didn't need this Farsi translation Cotton so cleverly shared on Twitter.

Which leaves us with just one lingering question: If Cotton is, as he writes, so committed to "mutual understanding and clarity," why couldn't he wait until the storm clouds passed and made sure his colleagues had the time and space to consider what they were signing on to?