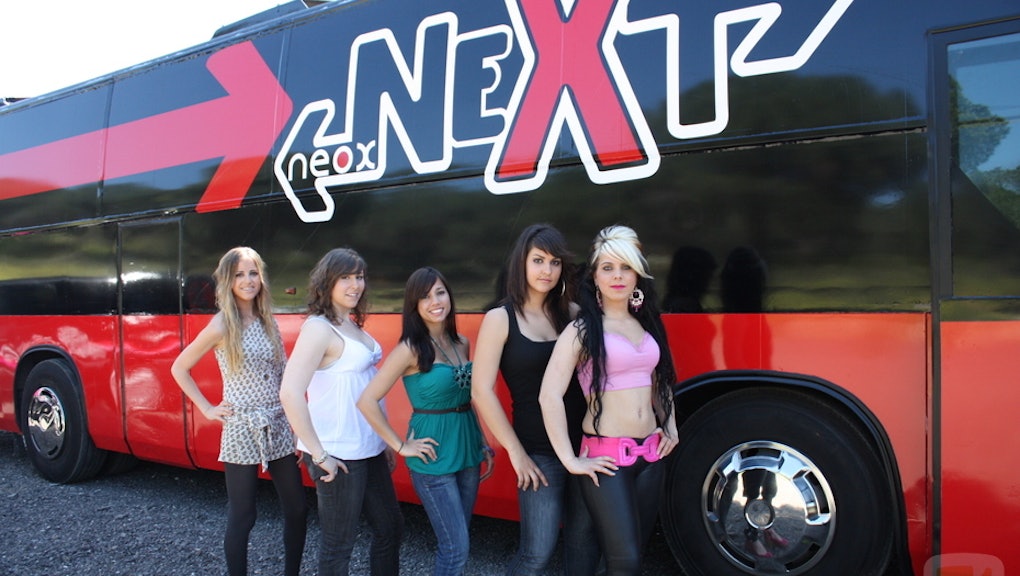 How MTV's Most Controversial Dating Show Predicted Tinder in 2005

You've got five girls or guys in front of you. If one isn't to your taste, you can easily move onto someone new. If you find one who is, you can let them know you like them. If they like you back, you can go out; if they don't, you lose out.

Next was a half-hour reality show among many in MTV's 2000s dating show craze. It had a truly winning tagline ("Bad dates never end — or do they?") and a simple premise, like The Bachelor in ten minutes, that was set up in the intro sequence:

"You're going on five dates. If the first one sucks, just say 'Next!' Kick them to the curb and start over with someone new. Don't feel bad for the daters who get the boot — they'll get cash for every minute they last. The one who makes it to the end will choose: Either go on a second date, or take the money and run. Careful what you do, because they may be Next."

Many shows relied on gimmicks, focusing on a hook like parents choosing suitors or multiple suitors competing at once. Next was inelegantly but effectively streamlined; speed dating for those too impatient for even five-minute conversations.

Of course, Next wasn't real. Not as a dating show, at least. Were there contestants along the way who were hoping to meet someone attractive they got along with? Perhaps. But Next was primarily cast, like many other reality shows, with actors.

DJ and astrologist David Palmer's first MTV appearance wasn't on Next — it was on Parental Control in 2005. On that show, he dumped his girlfriend for one of the women his parents set him up with. By Palmer's account, it was this appearance that got him onto Next in 2006 as one of the five guys "looking for love."

"They loved my personality. I broke up with my girlfriend on [Parental Control] and hooked up with another chick," Palmer told Mic. "They thought it'd be awesome if I was on Next. ... They wanted extreme personalities."

In addition to those, he said MTV was looking for "nerds" to balance out the bus. Palmer was the fourth guy of five and won his episode — he got his potential paramour to offer him a second date, to which he said yes. But theirs was not a love meant to last.

"She already had a boyfriend!" he said. "When I picked her, she was like, 'Oh, well, it was nice doing this with you, but I already have a boyfriend.'"

Contestants on Next had no idea where they were going during the show. They were picked up from their homes in limos, driven to the bus, and then the bus took them to their location. The windows were closed so that they couldn't see whatever activity the potential date had planned. One couldn't leave the bus during the shoot — which was a bit of a bother for Palmer.

"I was a smoker at the time, and I remember getting in a lot of trouble because I went into the bathroom on the Next bus and started puffing away. Because they wouldn't let me off!" he said. "You're like a jailed person in a cage."

MTV cast a wide net. To be cast from one show to another wasn't common; according to Palmer, a lot of Next contestants were found on MySpace, of all places. But for many in Hollywood, Next and the other MTV shows were a stepping stone.

Actor Michael Ark was one of those people. He wasn't found online; Ark was selected for season two of Next at a casting call, despite his distaste for the show's form both then and now.

"My agent at the time, he said I had an audition," he told Mic. "I heard it was Next, but I wasn't the biggest fan of reality TV." There were five in the audition room at a time — echoing the five-on-a-bus format of the show — and they were asked questions about their hobbies and proclivities.

"I'm a religious guy, so I just straight up told them I'm gonna wait until I'm married. Then they asked me to take off my shirt and show them my abs," Ark said, laughing. "I did."

When he was cast on the show several months later, he had to answer a questionnaire with queries like "When did you have sex for the first time?" Once he got on set, he was given lines to say on the bus and off — all scripted, he said. But his portrayal on the show wasn't quite true to life.

"You know, when you get off the bus, the name and traits [MTV displayed on screen]? That was completely bogus," he said. "It said that I'm a Christian, and that I like to have sex in movie theaters. I was like, okay, can't do anything about it."

Unlike Palmer, Ark was instantly Next-ed, a term for when a contestant got eliminated before he or she could say one word. "We had to do it like four or five times, for camera coverage," he said of the actual Nexting. "I remember the girl started crying after the second take. I really didn't care much about what was gonna happen. But she started crying, and I couldn't figure out why."

If anything, she had practice saying no: All of the guys on his episode were instantly Next-ed.

"Next was the live Tinder, for sure," Palmer said.

Next-ing was the original "swipe left." Even Palmer thinks so: "Next was the live Tinder, for sure," he said. The idea that a barely-remembered MTV dating show could be so strongly predictive of a web dating phenomenon seems farfetched. And yet, the two share a common thread of DNA: the power of instant choice.

A generation has been raised on the idea that potential partners can be chosen from a pile of options, from the past of Next to the now of dating shows. Swipe left, swipe right, Next, friend request, follow; all ways to filter out the unwanted until the "right" person has been found. If anything, modern dating culture is even more streamlined than Next — not even a moment of personal connection is required.

Whether that influence is good is debatable, but it does raise the question of whether Next could exist today. While it would seem to be a good fit for the already familiar audience, it's also not novel anymore. It was the "breeding ground of reality," as Palmer put it; shows far more ridiculous, like the Flavor of Love franchise and MTV's own A Shot at Love with Tila Tequila, have expanded and normalized the form. But a nostalgia-based return is a different story.

"In 2015, I'm sure it could exist," Ark said of a Next revival, a la what MTV did with Parental Control in 2010. "If people were interested in that. ... I was never a fan, but I know a lot of people love reality shows." But what if there were another option, a middle ground, as Palmer proposed?

"It was an exciting and thrilling experience, not knowing what the girl was going to look like," he said. "If it was real-real, it would be kind of cool." It'd require normal people, not the Southern California hotties MTV looked for to say scripted and cheesy lines. But to bring a true-life Next into 2015? "That'd be really interesting."