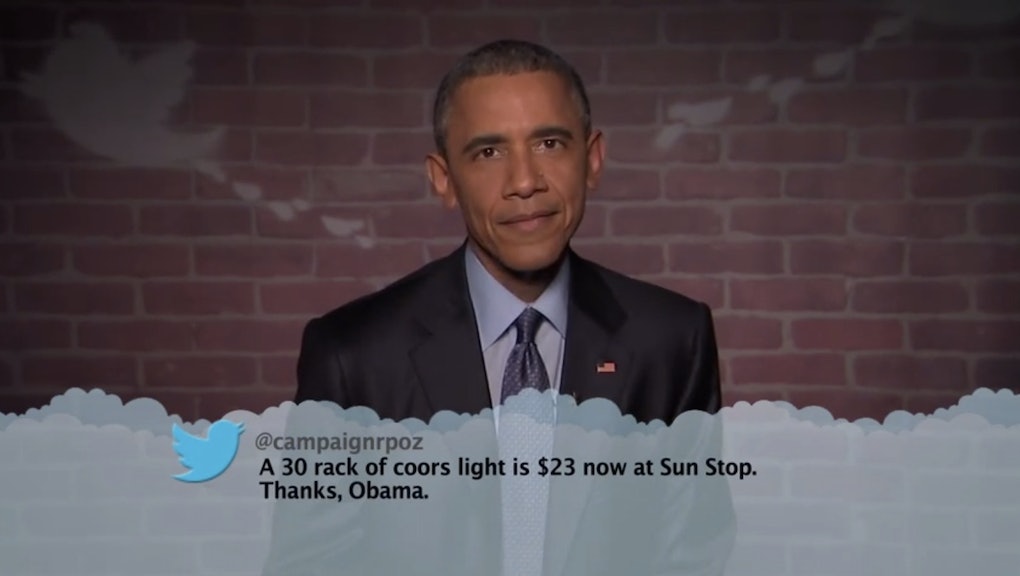 Remember when President Barack Obama's appearance on The View in 2010 was a source of controversy? If only we knew of the slow jams and mean tweets to come.

Obama's appearance on Thursday night's Jimmy Kimmel Live included his participation on the popular segment "Celebrities Read Mean Tweets." This time, it was an all-presidential edition, although not a particularly mean or funny one. It was the latest stop in an increasingly bizarre set of media stops during his second term.

The dignity of the presidency is an outdated idea — who cares if he slow jams the news with Jimmy Fallon? It exposes Obama further to the young audience of voters that has been vital to his political success. Done well, these media appearances can be fun while leaving Obama's "presidentiality" intact, except in the eyes of those who never respected said presidentiality in the first place.

Although viewers were robbed of the opportunity to see the commander-in-chief respond to truly mean tweets, watching him read social media posts would be giving idiocy the greatest possible platform. It would be, in Internet parlance, feeding the trolls on a presidential scale. Unfortunately, relying on weak, unremarkable tweets made this segment lame — the joke was just that Obama would be doing this at all.

This was not, however, the lamest media event Obama has been convinced to engage in recently. That honor goes to BuzzFeed and a selfie stick.

Credit to Obama for trying, but there was nothing of substance here — and the fault for that falls on BuzzFeed. The video doesn't use Obama to do anything interesting or organic to his position as leader of the country. The joke is "look at Obama doing silly things." That's not particularly engaging or fulfilling. It's good for a laugh or two, but taking a picture with a selfie stick doesn't help him connect with his audience any more.

Obama's live appearance on The Colbert Report in December 2014 was worlds better, doing a version of Stephen Colbert's regular bit "The Word" called "The Decree." The main difference between The Colbert Report's use of Obama versus BuzzFeed and Jimmy Kimmel Live's is that it actually uses his presidency in context. The jokes themselves work on their own; the joke isn't just laughing that our president would do such a thing.

That's why these media appearances are so bizarre: Obama seems to not care about the separation between unconventional and innovative forms of reaching out to voters and just goofing off. Maybe it's the second-term jitters getting to him — as he hilariously reminded us at the State of the Union, he's got no more campaigns to win. It's hard to fault him for wanting to have some fun.

But in order to keep looking presidential, he'd do well to focus on pieces that don't make him the butt of the joke.