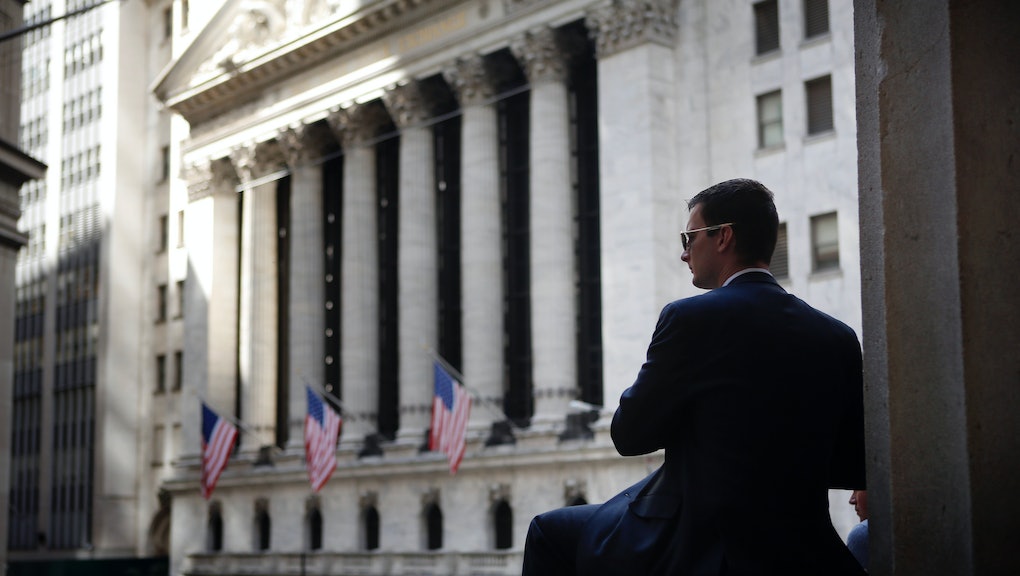 Those who forget history are doomed to repeat it. By the looks of it, America is on the road to repeating a particularly ugly stretch of recent history: Sky-high Wall Street bonuses are coming back.

After a steep decline during the onset of the Great Recession, data the New York City Comptroller's office released Wednesday shows that Wall Street bonuses are at their highest on average since 2007 — also known as the year immediately preceding the global financial collapse.

The data show that bonuses were up by 2% in 2014, hitting a healthy average of $172,860 — that's three times the median income of the average American household.

What is going on here? "There was no change in policy," Elven Riley, a professor of finance at Seton Hall University, told Mic. According to Riley, bonuses shrank during the recession because "there was just less profit to go around." Wall Street's bonus culture didn't fundamentally change, however, and barring any new regulations, the era of the mega-bonus was destined to return.

Bonus defenders counter that the outsize checks helped firms stay more competitive, serving as a hedge against losses. After the comptroller report came out, Bloomberg columnist Barry Ritholtz outlined what he says is an enormous difference between the rank-and-file bonuses given to employees and celebrated payouts for corporate chieftains who helped wreck the economy.

Colossal bonuses aren't a function of the recovery. Wall Street's bloated bonuses have been higher than American's median income since the mid-1990s, highlighting the much larger problem that pay for the average American just isn't rising fast enough. Adjusting for inflation, hourly wages today are roughly the same as they were in 1979, according to the Pew Research Center. Pew also found that when wage growth did occur, it predominantly went to the top income brackets. Canada now likely has a higher median income than the United States, and Western Europe has also been gaining steadily

Writing for the Washington Post, Harold Meyerson attributed wage stagnation to the fact that corporate profits today typically go to investors and shareholders rather than translate to higher salaries for workers or investments in research and developments.

The minimum wage of $7.25 an hour has not risen since 2009, and its real purchasing power has been falling for decades. The 1968 minimum would be $10.75 adjusted for 2015 inflation. The U.S. minimum is also currently behind Germany ($11.60 USD), England ($9.58 USD for those 21 and over) and Australia ($13 USD). One of the best ideas former Republican presidential candidate Mitt Romney ever had was tying the minimum wage to inflation, much as social security payments are tied to cost of living adjustments.

Whether it's former Tyco chief Dennis Kozlowski's $2 million, weeklong birthday bacchanal in Sardinia, or ex-Merrill Lynch CEO John Thain's $1,405 trash bin, nobody wants to return to the days of over-the-top corporate excess. And while Wall Street bonus may alone be cause for outrage, lifting up the rest of the American workforce is the real issue we need to focus on.