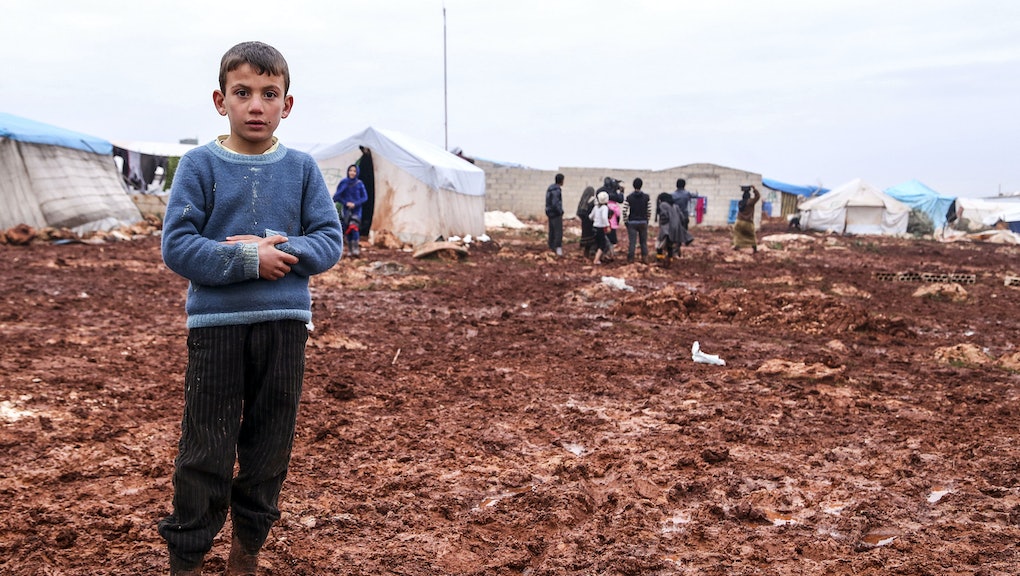 Now, four years later, the International Rescue Committee reports that 200,000 people are dead, 11 million are displaced and approximately 83% of Syria's electric lights have been knocked out of operation.

The stark difference between Syria then and Syria now was recently captured in satellite images obtained and analyzed by a joint team at Wuhan University in China and the University of Maryland. They compared how much nighttime illumination was visible before and after the country's power grid was disrupted by war.

Here's what Syria's power grid looked like from space in 2011:

The images point to how much human suffering and physical damage has been brought upon on Syria since 2011, when government forces loyal to Syrian dictator Bashar al-Assad cracked down on peaceful protesters with massive police deployments, live ammunition and systematic torture.

Since then, the nation has crumbled into a warzone where government troops, Islamic State group fighters and various opposition forces fight for control, and no one is particularly interested in repairing Syria's infrastructure.

"Satellite imagery is the most objective source of data showing the devastation of Syria on a national scale," lead researcher Xi Li said in a statement for the International Rescue Committee. "Taken from 500 miles above the earth, these images help us understand the suffering and fear experienced by ordinary Syrians every day, as their country is destroyed around them. In the worst-affected areas, like Aleppo, a staggering 97% of the lights have gone out. The exceptions are the provinces of Damascus and Quneitra, near the Israeli border, where the decline in light has been 35% and 47%, respectively."

The researchers also discovered a linear correlation between decline in electric light observed during nighttime and the number of internally displaced people in each province, further hammering home the point that it's not just light bulbs blinking out across Syria — it's human lives. Millions of people have been displaced and forced to relocate around Syria or to neighboring countries such as Jordan, Lebanon and Turkey.

The U.N. is calling the situation in Syria the biggest ongoing humanitarian disaster in the world today, noting that both sides in the conflict were guilty of indiscriminately killing, maiming and torturing civilians. Government troops have used barrel bombs, cluster munitions and chemical weapons on civilians and insurgents alike, while Islamic State fighters have launched suicide attacks, massacred civilians and held public executions to punish violators of its version of sharia law.

The results were released by the International Rights Committee to attract attention to the #WithSyria campaign, a global coalition of more than 130 humanitarian organizations asking the governments of the world to do more to end the war. #WithSyria also released the following heartbreaking video, showing a young boy living a comfortable life in Syria in 2011 and imagining what his life looks like now:

In a post on the #WithSyria campaign, Amnesty International Middle East and North Africa Program director Philip Luther noted that both government forces and armed groups like the Islamic State are committing gross human rights abuses, while peaceful activists are being silenced, held captive, tortured or even killed. All the while, barely anyone is taking notice.

"The international community's failure to unite to address one of the defining human rights crises of our times sends the signal that it is wantonly indifferent to the devastating impact of the conflict on civilians in Syria," Luther wrote. "Such indifference must end."