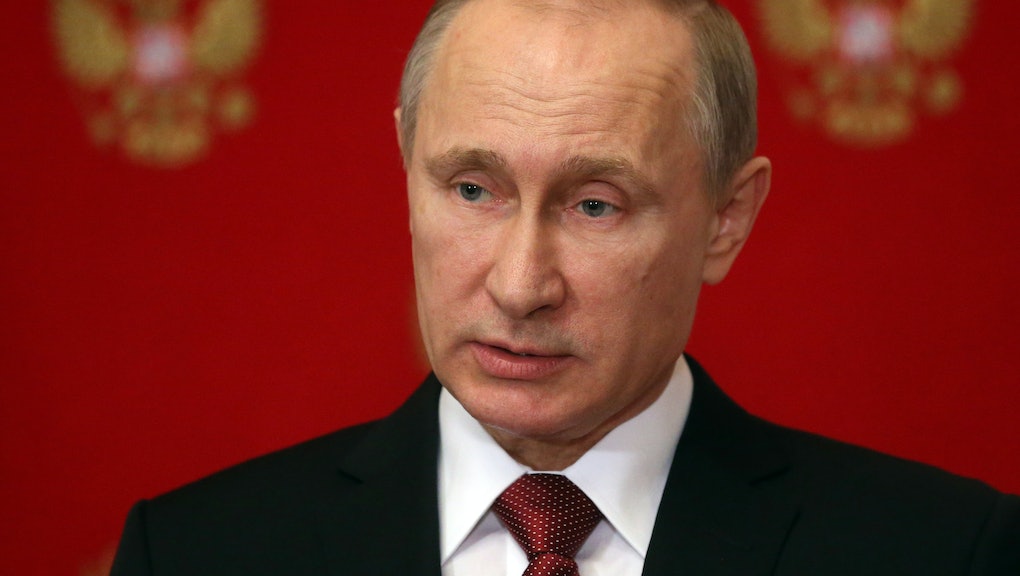 Where in the World Is Vladimir Putin? 5 Theories Ranked by Likelihood

Where in the world is Vladimir Putin?

The Russian president has not been seen in public since March 5, making Sunday the 10th day in a row that the normally omnipresent Putin has escaped from the watchful eyes of the public. A couple days without explanation might be overlooked, maybe even a week, but 10 days without their bear-wrestling leader Russians are beginning to get a little spooked.

"Speculation about Putin's whereabouts ranges from the mundane — maybe he has the flu, maybe his mistress had a baby — to serious rumblings of a coup in the Kremlin," World Politics Review associate editor David Klion, who writes frequently about Russia, told Mic. "Whatever the real reason is, we are reduced to gossip and rumors because Putin has hollowed out independent media and made it impossible for anyone to be accurately informed about Russian politics."

With just rumors to go on, it remains to be seen just where Putin will turn up. Here are the places he might be, in descending order of likeliness:

Strong-arming the Russian populace into line isn't an easy job, and Putin does happen to be 62 years old, so the possibility that he is recovering from the flu or another ailment seems the likeliest.

A March 11 Reuters report cited an anonymous Kazakh official who informed the news service that his upcoming visit to Kazakhstan's capital of Astana planned for March 13 had been canceled beause "it looks like he (Putin) has fallen ill."

Putin is famously protective of his healthy image (going so far as to pose shirtless on a horse for photos), so it makes sense that he might not want to make public appearances while sick.

2. He's really busy, or pretending to be.

"He has meetings all the time," Peskov said. "He has meetings today, tomorrow. I don't know which ones we will make public." By Friday, he was growing weary, telling the press that "We've already said this a hundred times. This isn't funny anymore." Photographs released by the Kremlin claimed to show Putin hale and hearty at meetings Tuesday and Wednesday, although there is no proof as to their authenticity.

The New York Times speculated that Putin could have also deliberately left a hole in his calendar to distract Russians and outsiders from the brewing crisis in Ukraine and the failing Russian economy, or simply to remind everyone how bad it would be if he was no longer in power.

"Russians, including Putin opponents, are as worried about his weeklong absence as kids would be if their father had wandered off somewhere and not come back for days," wrote Leonid Bershidsky in the Sydney Morning Herald. "They watch the Kremlin website with a mixture of distrust, apprehension and hope, wondering how, or whether, the steep pyramid of power Putin has built over the years can function without him at the top."

The cold shoulder is always colder in Siberia.

3. He's attending the birth of his love child.

An article in Swiss newspaper Blick alleged that Putin was in Switzerland with his oft-rumored girlfriend, former Olympic gymnast Alina Kabayeva, who gave birth to his daughter. It's pure hearsay, given that the Daily Beast is reporting that other explanations for his supposed (and unconfirmed) presence in Switzerland included unrelated medical treatment or recovery from a botched plastic surgery.

Putin, however, is incredibly secretive about his personal life. For example, the Russian public isn't even quite sure who his daughters are. So if the Russian president and ex-KGB agent really is welcoming a little Putin into the world, the rest of us might not ever know about it.

"I never believed that Putin and Kabayeva had a romantic story but so many people were trying to convince me that Putin was actually in love with her, that now I feel torn," Russian political expert Stanislav Belkovsky told the Daily Beast. "Especially, after I heard that she quit her work of a deputy at Duma, because she could not hide her pregnancy any longer and now we hear that she had a baby."

4. He's been outed in a palace coup, or is fleeing for his life.

Thinly sourced reports from tabloids like the Daily Mail have speculated that Putin has been overthrown by security agencies in Moscow. Just weeks ago, opposition leader Boris Nemtsov was assassinated by professional gunmen in the city streets, exposing uncanny cracks in the supposed unity at the Kremlin.

The New York Times reports that former presidential adviser Andrei Illarionov wrote a blog post informing the public that Putin had been overthrown by hardliners supported by the Russian Orthodox Church. Crashing oil prices, mismanagement of the Ukrainian fiasco and Western economic sanctions have all led to previous warnings that the seemingly omnipotent Putin was building an array of enemies desperate to stop him.

Unfortunately for fans of palace intrigue, the Interpreter writes that while some Russians have been sharing photographs supposedly of tanks encircling the Kremlin, their correspondents have reported no unusual activity. If Putin has been quietly removed from the halls of power, then the plotters would have to have been very crafty indeed.

Someone could have shot him with a high-powered sniper rifle from a mile away. Maybe a secret surgery went bad, leaving him flatlining on the operating table. Or perhaps he had a massive, instantaneous stroke, landing face-down in his borscht.

Whatever the cause, Russians and outsiders alike have been happy to speculate that Putin has left this life forever for the big KGB prison in the sky. Using the hashtag #????????? ("Putin has died"), social media users have speculated that Putin has passed on and the Kremlin isn't ready to let the rest of the public know yet. It's pretty unlikely that the president is no longer with us, but at least it'd be a heck of a state funeral:

The Kremlin says Putin is due to re-emerge Monday for a meeting with Almazbek Atambaev, the president of Kyrgyzstan, at which point the public should learn whether rumors of Putin's demise are wildly exaggerated. If he's a no-show, be on the lookout for some very nervous Kremlin officials doing their best to pretend nothing is wrong.

Whatever the truth of the matter is, for a man with as much international mystery and intrigue as Putin, unless we see his face, don't expect the rumors to die down.