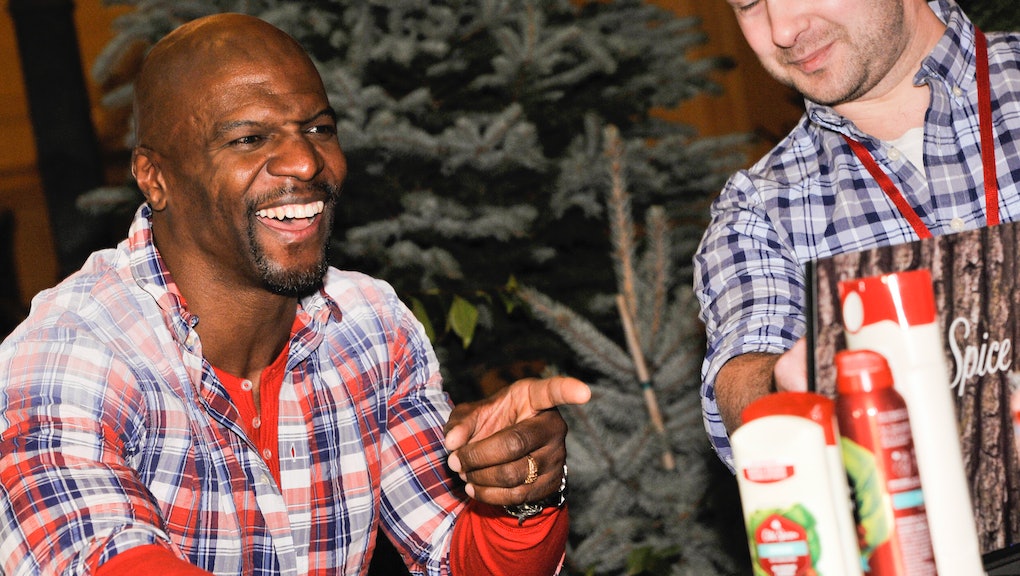 4 Ways That Every Guy Can Be a Feminist Ally, According to Terry Crews

We love to celebrate male celebrities who come out as feminists. From Ryan Gosling to Joseph Gordon-Levitt to Aziz Ansari, it seems whenever a man in the spotlight supports equality — even by simply holding a sign or learning what the word means — we consider ourselves one step closer to a feminist utopia.

But former NFL player and current Brooklyn Nine-Nine star Terry Crews is pushing men to do more than embrace the label. In a new interview with Dame Magazine, the star shares insights on what it really means to be a male ally.

This isn't the first time that Crews, who published a memoir based on his own exploration of masculinity entitled Manhood last year, has spoken about his views on feminism. It's great to see a prominent male figure thinking about these issues so deeply, and his advice is important. Here are the steps men must take to consider themselves true allies, according to Terry Crews in his interview with Dame.

Before one can outwardly identify as a feminist or male ally, they must address the internal forces holding them back. One such obstacle, according to Crews, is embracing gender fluidity. "Every man and every woman has both sexes in them ... We have to embrace the duality that we are," Crews told Dame, addressing how neither he nor his Brooklyn Nine-Nine character are afraid of their feminine sides. "When you embrace either side of who you are, if you're a woman and you embrace that manly part of you, or if you're a man and you embrace that female part of you, it makes you a really whole, wonderful person."

Men must also discard the pride that's often part and parcel of masculinity. Even though men are "taught that pride is a manly thing, that pride is a good thing" it ultimately inhibits men from growing, according to the actor. "When you're so proud that you won't change, you've got problems."

"Women are more than capable of handling themselves, and have been doing so wonderfully for years," Crews said. Furthermore, women contribute valuable points of view and skills that men can't, but certainly need. For example, Crews notes that in his own marriage, because his wife "has this touch, and she sees things [he doesn't] see" Crews feels he should "follow her example a lot of times ... Because of her, I can see what I didn't see before."

Beyond personal relationships, Crews acknowledges that women should be considered equal partners in all work. When women are "marginalized and not respected" on a societal level, Crews told Dame, then "the smartest people are there, but you don't use them ... let's get everybody in the room."

Crews acknowledges that this kind of change likely won't happen overnight, and may involve mistakes. This is fine — as long as men remain humble and and admit to their wrongdoing. "If you did wrong, if you were that way, I get it. I was that guy, too," Crews said.

But in order to counter their anti-feminist actions, men must actively right these wrongs. "Along with apologies, you have to begin to make amends," he said. "Apologies are good, but if you're not doing anything about it ... If you just talk and nothing gets done, it's empty. It's dead."

Ultimately, though, men can't follow a guidebook for how to be the perfect male ally. Any kind of comparison to others, whether "financially, workwise or personally" is inadequate, Crews said to Dame, because "you don't know where they came from. You only know where you came from." Only when men approach equality from an authentic, humble place can we hope to achieve change.

Crews ultimately shows that we need to reconsider which men we laud for being "feminists" and the actions we uphold as worthy of this praise. Although he is a celebrity, Crews' dedication to supporting his purported belief in equality with intelligent explanations and commitment to living that belief shows that instead of waiting for major male celebrities to make feminist statements or actions — no matter how shallow they are — we should be looking for the men who are doing authentic feminist and social justice work, and making them better known to wider audiences.

Crews proves how much we can all benefit from exposure to men who understand the deeper concepts behind allyship and who are moving past rhetoric to create the world in which they want to live.