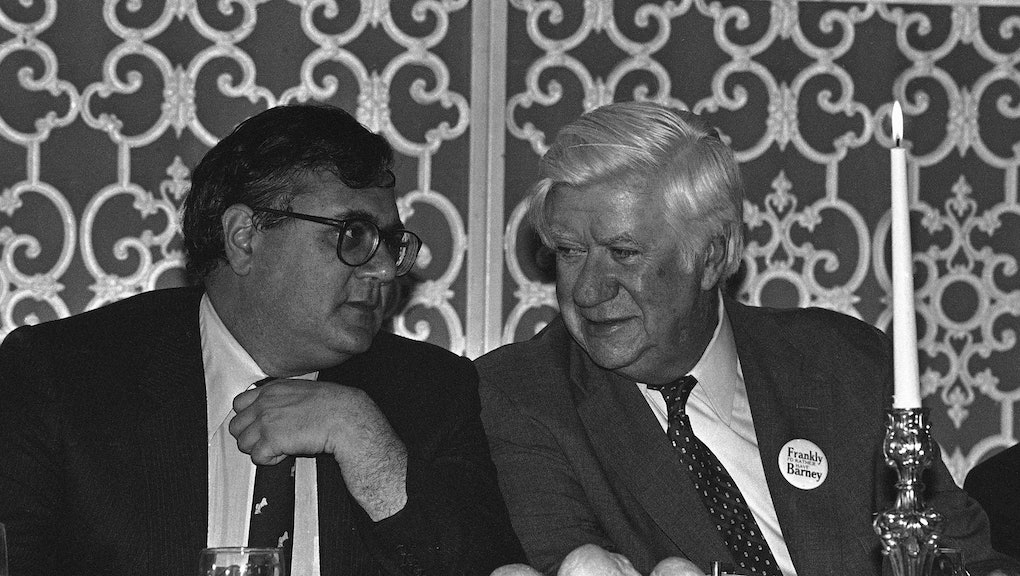 In a new memoir, 74-year-old former Rep. Barney Frank (D-Mass.) traces the path of his long political career against the LGBT community's fight for civil rights and social acceptance, a continuing struggle Frank only publicly embraced in 1987, when he announced to the world he was gay.

Frank would become the second openly gay congressman, but the first to come out voluntarily. He did it six years after arriving on Capitol Hill, when the conventional wisdom held that this kind of "disclosure" would either end or do irreparable damage to one's political ambitions.

"I was a homosexual, an involuntary member of one of America's most despised groups," he writes early on in Frank: A Life in Politics from the Great Society to Same-Sex Marriage, describing the anxieties that would color much of his first four decades. "I knew that achieving success in any area where popularity was required would be impossible, given the unpopularity of my sexual orientation."

But the Massachusetts Democrat's fears would be assuaged by the outpouring of support from constituents and peers following his public announcement. Frank would go on to ride the currents of an increasingly progressive society and his own considerable political talents to a long and consequential career in public life. In doing so, he would pave the way for a new generation of gay officeholders to serve openly.

The final push: "By 1986," Frank writes, "I was ready as I would ever be" to go public. But it was the summer release of a book by former Rep. Robert Bauman, a conservative Republican who had been voted out of office in 1980 after being caught soliciting sex from a 16-year-old male prostitute, that finally convinced him to act.

Bauman's book told of Frank's attendance at a gay pride rally with a man the author "inaccurately assumed was a romantic attachment." Still, the implication was clear, and Frank was worried he would be outed.

"I was scared," Frank writes. "I was ready to come out, but not at his hands, not in that way, not at that time."

The political press, though, mostly ignored it. They had known the truth, Frank writes, but respectfully kept his secret.

Frank felt obligated to tell House Speaker Tip O'Neill, the powerful Democratic foil to the recently reelected President Ronald Reagan. In one of his most telling passages, Frank describes the way O'Neill responded to the news after the young congressman approached him on the House floor in full view of their colleagues:

Later that day, Frank ran into a friend, Rep. Pat Schroeder (D-Colo.), in the cloakroom. She expressed relief that he was "okay" and relayed the details of her own conversation with the speaker.

"Pat, have you heard the sad news about Barney?" O'Neill had asked. "It's too bad; he was so talented." He also warned his young press secretary, Chris Matthews (now the frenetic host of MSNBC's Hardball), that "we might have an issue to deal with. I think Barney Frank is going to come out of the room." Matthews, Frank notes, "quickly made the necessary metaphorical adjustment."

Telling the world: The congressman would not come forward to the voting public until May 1987, when he gave the story to the Boston Globe. It was published on the Saturday of Memorial Day weekend. Frank recalls the anxiety he felt arriving for a pair of parades in his district.

"I could not think of a worse way to spend my first day out of the closet," he writes. His initial worries were realized when an older colleague "confronted me, complaining that I had lied to him when he'd asked if I was gay" during his first reelection campaign in 1982.

But what followed "was almost wholly positive." A conservative state senator asked Frank to walk next to him as the first parade began. "For the second, larger parade in Attleboro, I marched alongside a uniformed Navy veteran," the husband of his home district office manager. Hours later, he was given a standing ovation at a Cirque du Soleil performance in Boston. The applause, Frank says, dwarfed that received by another notable attendee, the actor Christopher Reeve.

"For the first time, I realized that coming out could have political advantages as well as liabilities," Frank writes.

On Sunday morning, Boston Mayor Ray Flynn — a pro-life Democrat — began the scheduled AIDS Walk by giving Frank a shout-out, telling a supportive crowd that, as the author remembers, "I was a great congressman who did so much to help people, and that was still the most important thing to say about me."

Running for reelection in 1988, Frank defeated his Republican challenger by 40 points. He would serve 12 more terms in the House of Representatives.

The aftermath: O'Neill had been correct in delivering his prognosis almost a year earlier. The up-and-coming young congressman would never ascend to the speakership, nor would he ever rank among the party's senior leadership. But he did not lose his job, and over a 32-year career as the Democratic representative from Massachusetts' 4th District, Frank would help push through legislation in 1993 to end the military's ban on gay and lesbian service members, and then in 2010 to do away with its "don't ask, don't tell" policy altogether.

Along the way, he became a vigorous advocate for the LGBT community and eventually helped write the Dodd-Frank Wall Street Reform and Consumer Protection Act, which imposed new regulations on the big banks in response to the 2008 financial crisis.

But even today, Frank writes, he still feels the sting of more than four decades concealing his sexual identity.

"Sixty years ago," he writes in the closing chapter, "when I began to think about how to maximize my participation in politics, I understood that it would require the repression of any private life. Today, I cite the emotional damage I inflicted on myself when I speak with younger LGBT people who ask my advice."

'Frank: A Life in Politics from the Great Society to Same-Sex Marriage' is published by Farrar, Straus & Giroux and is available now for pre-order. It will be on bookstands March 17.