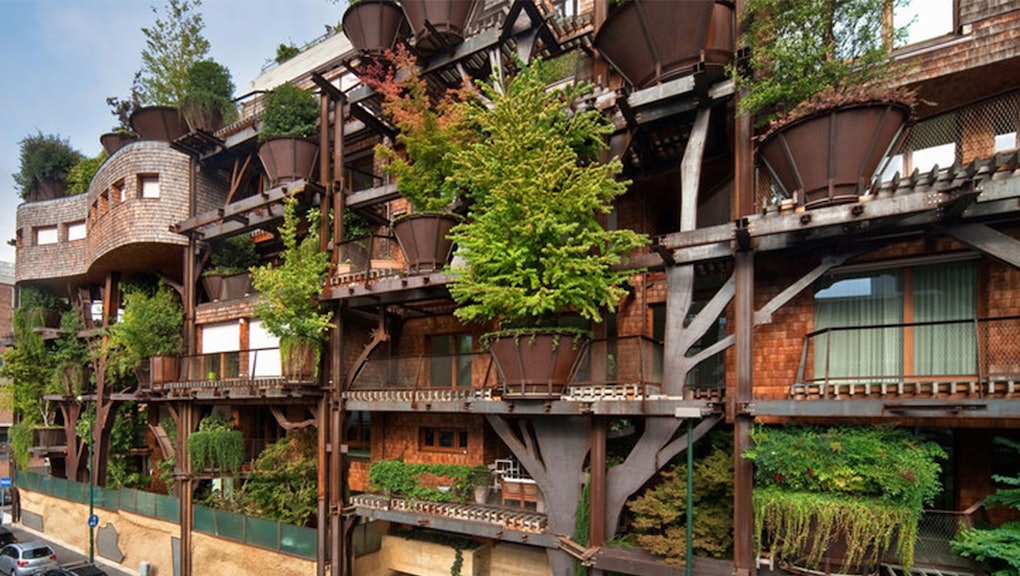 This "Living" Apartment Building Is Basically a Giant Treehouse for Adults

Would you ever live in a tree? That's a question one Italian architect is looking to answer. With 25 Verde, designer Luciano Pia is attempting to combine modern construction with green technology.

Pia's apartment complex sits among some 200 trees, which are maintained with recovered rainwater, and uses a system of pumps and geothermal energy to provide hot water and heat in the winter.

According to the architect's website, 25 Verde aims to be a "living forest" that allows its residents to meld distinctions between external and internal environments. The living building grows and ages with its occupants. With apartments costing roughly 5,500 Euros per square meter, the complex is actually less expensive than the Italian average. The 63-unit block went up in Turin, Italy, two years ago and is now almost fully occupied.

"[People] were very enthusiastic about the project," Pia told Mic via email. "Units were sold even before they were built."

Going green: For energy-conscious Americans who don't want to live in a tree, there are ways to make traditional homes more efficient. Believe it or not, many of the things we have plugged in continue to suck power even after they are switched off. Unplugging appliances we don't use very often is an easy way to cut down on so-called "vampire power."

"Human behavior is just hard to predict," Troy Tanner, the founder of Home Energy Detective, told Mic, noting that hard to anticipate quirks of human behavior can play at outsized role in energy consumption tracking. According to Tanner, who makes a living helping Americans reduce their energy consumption, simple changes likes insulating water pipes, turning the lights off, going to LED light bulbs and even changing air-conditioner filters could have an effect.

And for most American homes, these kinds of changes are sorely needed. The average American home uses 18.1 kilowatt-hours per day and 6,617 kilowatt-hours per year. That home energy consumption helped make the United States the world's second largest energy consumer after China. Put another way, in 2012 America consumed more energy than all of Europe.

A 2010 Washington Post report found that despite advances in energy-saving technology and appliances, per capita, American homes still require roughly the same energy as they did in 1971. The Post reported larger homes and more energy-guzzling appliances as the key reasons for the stagnancy.

The power of the sun: Solar energy has also emerged as an increasingly attractive option. Today, credits and subsidies offset installation costs that can run into the tens of thousands of dollars. Since the Energy Policy Act of 2005, the federal government has subsidized 30% of "qualified expenditures" for the installation of solar units in American homes.

Consumers can even sell excess energy that they generate back to the electrical grid. According to one study, people who switch to solar can expect to save an average of $100 a month and as much $20,000 over 20 years in some states.

Over 30 years, a solar system can offset 30 tons of harmful carbon dioxide from the atmosphere, the equivalent of planting 2,400 new trees. In arguably the most telling sign of solar's potential, traditional utility companies have pulled out all the stops in an attempt to kill the industry.

"I think in the next 5 to 10 years solar panel efficiency is going to knock people's socks off," Tanner told Mic. "Instead of 'see, I got one' it will be 'why don't you have one.'"

Ultimately, the issue at stake is bigger than saving money or feeling good about yourself. Whether it's projects like 25 Verde, or just making your current life more efficient, we all have a responsibility to do what we can to keep life here livable for the next generation. Changing how we live will inevitably be a part of that process.