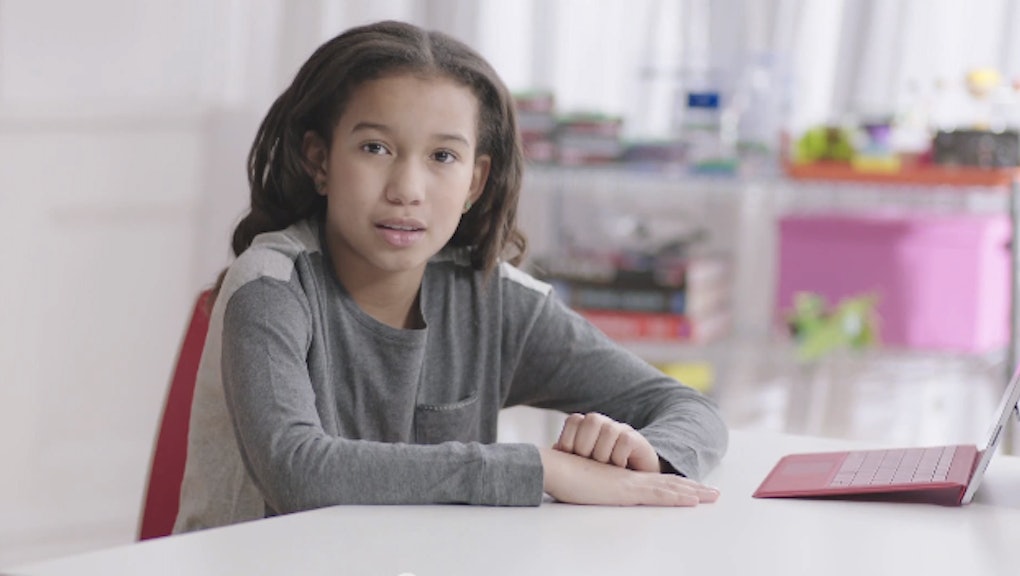 "When I was littler, I used to think technology was great," says one young girl in a moving new video from Microsoft's DigiGirlz program. "And then I started thinking it was more of a boy's thing."

DigiGirlz "gives high school girls the opportunity to learn about careers in technology, connect with Microsoft employees, and participate in hands-on computer and technology workshops," according to its website.

Now, the program's powerful video "Girls Do Science" aims to show the world why young girls shy away from STEM — and why we must encourage them to change their minds.

The video begins by showing young girls discussing their initial positive feelings about and experiences with technology. "It can really help you uncover like little, small little secrets," says one. Another describes a garage door opener and website she built, and yet another shows off a computer she constructed.

Their initial interest is hardly the exception to the rule, the video says, noting that 7 out of 10 girls are interested in science.

But, these girls reveal, there came a time when their seemingly limitless interest in the field became restrained.

"In commercials I saw a lot more men doing it," one says. Another adds, "There used to be a girl in the robotics class but she quit, so I'm the only girl left."

"I just think that inventing is for boys because they have Albert Einstein — he invented, he was a guy — and Benjamin Franklin also," says another.

Indeed, there are few fields in which women are less represented than the science, technology, engineering and math group known as STEM. Only one in seven engineers is female, according to U.S. Commerce Department numbers, and the National Girls Collaborative Project reports less than 1% of employed scientists and engineers are minority women. Despite media coverage of this gap, studies show that the rates of women enrolling in STEM classes and entering the field are actually in decline.

Cultural attitudes and media messages surrounding STEM that fail to authentically represent women in the field are cited as crucial dissuading factors by these girls. Perhaps that's why, despite an overwhelming initial interest in the field, only two out of 10 of girls actually pursue science-based careers.

It is at this crucial point between intellectual interest and cultural dissuasion that Microsoft's DigiGirlz initiative hopes to intervene. Launched in the United States in 2000, the program includes online classes, a "High-Tech Camp" and other opportunities, and even launched an offshoot in India in 2013.

The video ends on a positive note, with Microsoft sending the fledgling scientists and engineers notes of encouragement. The positive impact of the validation the girls receive from the notes — though it at first may seem like a sentimental advertising ploy — ultimately underscores the deeper issue of women in STEM.

Women in STEM fields earn about a third more than their counterparts in other fields and have smaller wage gaps relative to men, according to the Commerce Department. There are also currently an abundance of jobs available in these fields: According to the National Council for Women and Information Technology, for example, the U.S. will have around 1.4 million computer specialist job openings by 2020.

Discouraging women from entering these fields is therefore not just about cultural sexist double standards or achieving social parity, but about barring women from tangible, economic benefits.

Of course, although this initiative is commendable, Microsoft itself still has a ways to go representing women in tech. Women compose less than 30% of the company's entire workforce and only about 17% of its leadership. Last year, Microsoft CEO Satya Nadella infamously suggested that women shouldn't ask for raises because refraining from doing so is "good karma."

Despite having some serious room for improvement, it's commendable that Microsoft is tackling this issue at all at one of its sources: By providing representations of girls who are interested in STEM, and by further bolstering that interest with resources and opportunities, Microsoft is undoubtedly contributing to the change we desperately need.