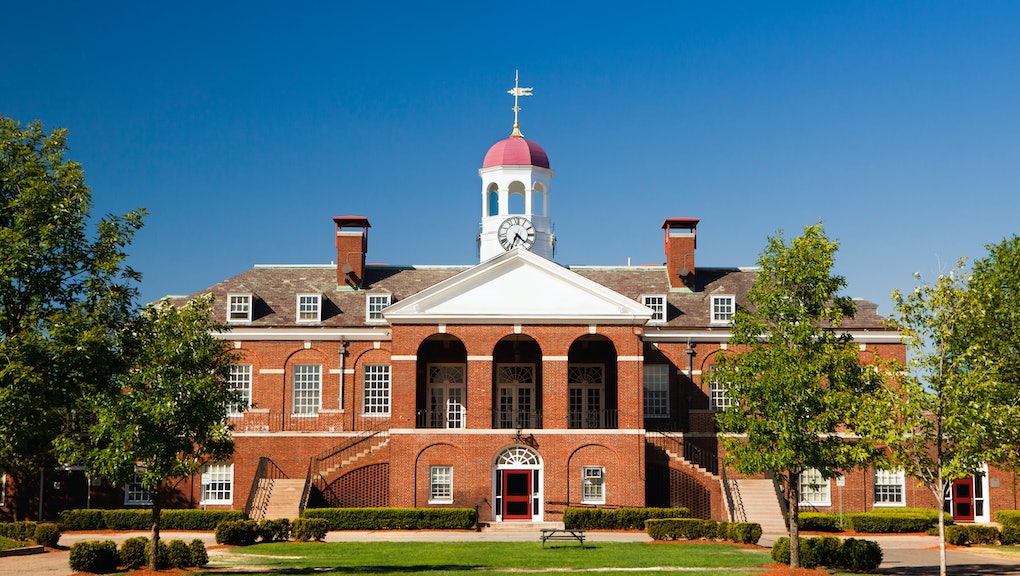 Every year, millions of high school seniors and their parents come to a critical juncture of their lives: the college admissions process. They worry about which schools to apply to, how they can get in and which schools, if any, they can afford.

A certain subset of parents and students believe that this isn't just a critical juncture but the critical juncture. Typically from affluent backgrounds, these parents are convinced that the fate of their children will forever be sealed by the name of the college on their diploma, and believe that anything other than an Ivy League degree will taint their professional and social prospects forever.

In his new book Where You Go Is Not Who You'll Be: An Antidote to the College Admissions Mania, New York Times columnist Frank Bruni documents these anxieties and offers a way forward. The book explains how several factors have perverted the college admissions process, ranging from absurd acceptance rates to status anxiety. Bruni uses a wide array of anecdotes and statistics to illustrate how failing to make it into an elite college is not the make-or-break experience it's so commonly made out to be. Often he finds that less well-known schools offer students unique benefits that they would have otherwise never encountered had they remained on the more gilded path.

"Education is indeed everything, but it happens across a spectrum of settings and in infinite ways," Bruni writes in his book. "It starts well before college. It continues long after college. College has no monopoly on the ingredients for professional success or for a life well lived."

Mic spoke with Bruni over the phone about his new book, the college admissions process, the importance of going to a good school and more.

Mic: What are the roots of the college admissions mania? There has been a hierarchy in the higher education world for quite some time.

FB: It's a confluence of things. One, it's easier to apply to these days electronically. There's the Common App. Because air travel is more accessible, people are applying across greater distances. There's the whole phenomenon of international students. All of that has upped the number of applications to exclusive elite schools and thus dropped the acceptance rate accordingly. When you have more applicants, you can accept fewer of them.

Coupled with those factors, we have a real sense in this country these days that income disparity and income inequality is profound. I think parents feel more panicked than ever if their kids don't end up on the right side of the ledger. The chasm between the haves and have-nots is greater than ever before. I think parents are more determined than ever to give their kids a leg up.

Mic: You call the college admissions process the "great brutal culling." Getting into a top university becomes existential for competitive students who see college as a "conclusive measure of a young person's worth" and an "uncontestable harbinger of the successes or disappointments to come."

FB: I don't think that the college admissions juncture is an uncontestable harbinger of what's to come, but I do think that kids have gotten that message. When you look at the aggressiveness of college counseling, the whole industry of private college counselors, private tutors, the test prep industry — all of that has become so ornate, and in some instances so costly, that it definitely sends a message that no amount of energy and no degree of investment is too great for the consequence of what's happening here.

I think that's out of whack. To give so many kids the idea that their future in life is going to be so phenomenally assisted or so incredibly retarded by the outcome of the college admissions process is not true, vis-à-vis how people succeed in life.

"Life is long. People bloom late, and the proof ultimately is in the work you do, in your track record in your jobs."

Mic: What do we know about how going to certain kinds of college matters for succeeding in life?

FB: We know that in terms of professional success, especially in certain professions like investment banking and management consulting, it can improve your odds, give you a fast track. But we know that it's so very much not the only way, and that personal characteristics — drive, resilience, people skills — matter more in the long run, as the time in college recedes and the relevance of the diploma wanes.

A good study to look at is sociologist Michael Lindsay's Platinum Study, which I describe in the book. He looked at 550 American leaders — CEOs, head of nonprofits, politicians — and found that nearly 2 in 3 of those he interviewed had not gone to colleges considered elite. Interestingly, a much higher fraction had gone to big-time grad schools.

So if you want to get all worked up about your diploma, at least wait until grad school to freak out! But, even then, don't. Life is long. People bloom late, and the proof ultimately is in the work you do, in your track record in your jobs. Not in the acceptance rate of the college whose exclusive sanctum you breached.

Mic: Part of your concern is the way in which the college admissions process represents a world that is increasingly "subdivided into microclimates of privilege and validation." An example you have in the book is when you interviewed someone who considered the University of Wisconsin to be a negative alternative to going to an elite school. But the University of Wisconsin is considered one of the top 50 universities in the country and one of the nation's premier research institutions. So when you step back, for someone to feel like that's an unsatisfactory prospect or not elite is sort of amazing. People seem quite bad at maintaining perspective.

FB: I could not agree with you more. I don't remember 20 years ago there being this many gradations of privilege among the affluent. Every time I turn around, the airline has further stratified the plane. Look at transportation. Here in New York we have a lot of new alternatives — you've got Uber, you've got UberX, which is a little below that, you've got services which are considered a little bit below Uber.

People are being ever more sorted into these micro-categories and I do think that psychology — that I have to make all the facets of my life reflect what I want my altitude of privilege to be — is refracted a little bit through the world of higher education.

Mic: William Deresiewicz, a professor at Yale, has garnered a great deal of attention for cautioning people against applying to Ivy League schools based on the conviction that it breeds what he calls "excellent sheep" — high performers with no ability to examine themselves or their world critically. What's your take?

FB: There's a lot to be learned from his argument, but I think it's a little harsh. I think most Ivy League schools are incredible institutions that, if you approach them in the right way, can give you some of the most fabulous educations on this planet.

Where one needs to listen to him is, what he's saying, too many kids go into these schools and kind of fall into a lockstep with their peers and march toward jobs in the financial services industry or the management consulting industry. Deresiewicz has some pretty depressing statistics about the percentages of graduates from some of these schools that go into these industries.

It's important to listen to what he's saying about not just falling into this stream toward high income and never investigating what you want to do in life, or what you should get out of college as a matter of true learning. But to say that an Ivy League school is going to do absolutely do that to you is not quite right.

Mic: What do you think the purpose of college is?

College is a great opportunity to take what you know and who you are and what you're familiar with and, in this one accelerated chapter, expand it and diversify it. People should be using college, which for most of them is a larger stage than wherever they went to high school, to broaden their frame of reference and become much more fluent in a complex and diverse society.