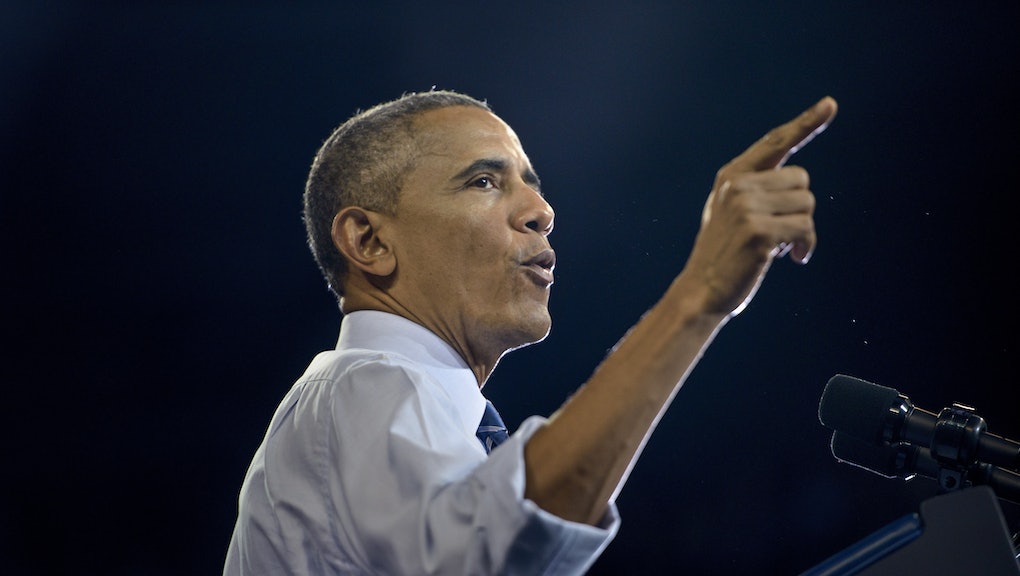 President Obama Has Officially Changed the Lives of 16 Million Americans

According to new government estimates released Monday, the Affordable Care Act has provided policies to approximately 16.4 million of the nation's uninsured — a full 35% drop from pre-reform levels.

This projection means that just 13.2% of Americans are now uninsured, down significantly from the peak of 20.3% spanning early 2012 to October 2013, when open enrollment began.

Of those people, roughly 2.3 million are young adults under the age of 26 who have chosen to remain on their parents' plans under the expanded eligibility guidelines. In states that decided to expand Medicaid, the uninsured rate dropped by an average of 7.4%, rather than 6.9% in "non-expansion states."

The reported drop in the number of black Americans without health insurance has been particularly impressive — down to 13.2% from a high of 22.4%.

Let's admit it, Obamacare is a success: While it's not single-payer health care, Obamacare has proven to be a robust program, meeting multiple objectives of health care reform in just a few years.

Aside from logging high enrollment rates, the Affordable Care Act has been remarkably successful at reducing the growth of medical costs. According to a January report from the Commonwealth Fund, as many as 75 million adults (roughly 41% of adults aged 19-64) had problems paying medical bills in 2012. That number dropped to 64 million (roughly 35% of adults) in 2014, the first time the figure has dropped since 2005.

Even more recently, a Congressional Budget Office report concluded that the Affordable Care Act did the exact opposite of draining federal coffers — it saved money. Thanks to myriad factors including the bad economy and the law's provisions putting caps on insurance company administration costs, Obamacare is projected to actually save $611 billion over the decade beginning in 2010.

Health and Human Services assistant secretary Richard Frank told USA Today that the nation hasn't seen a comparable drop in the number of uninsured since the creation of Medicare and Medicaid. "We have not seen a drop in employer-based coverage," he added. "That's good for the people and their health, and it's good for the economy."

Nice try, Republicans: At roughly 5.1% of the total U.S. population, 16.4 million people is a lot of folks with health insurance who didn't have it before. But perhaps unsurprisingly, conservatives remain as opposed to the program as ever, despite the fact that it is increasingly obvious that it cannot be rolled back without painful results.

Those 16.4 million are not going to give up their new health care easily, and interminable Republican efforts to repeal or restrict Obamacare (we're up to a comical 56 votes at this point) offer little to mostly happy new insurance-holders. As Time's Alex Rogers points out, there have been "56 votes, six years of debate, three elections and two Supreme Court cases" since the law's enactment, but Republicans have yet to advance any credible rebuttal.

The program is even popular among Republicans who participate in it, or at least the plans themselves are. According to a Commonwealth Fund poll, while the vast majority of Republicans say they disapprove of the law and believe it will have negative effects on the nation's health care apparatus, an astonishing 74% of them who purchased insurance via the new program are satisfied with their plans.

"So for all the Hitler analogies and claims that ObamaCare causes cancer, the people enrolled in the program — even Republicans — are mostly happy about it," the Week's John Aziz commented.

The greater victory: Faced with discussion of policy objectives, enrollment numbers and monetary savings, it's easy to forget the simple, yet very important, fact that thanks to the Affordable Care Act, millions of Americans now have health insurance.

In a country with some of the world's most advanced health care systems and technology, the fact that an uninsured person's visit to the emergency room could land them in mountains of debt is nothing to be proud of. But now, 16.4 million more Americans can live their lives knowing they're covered when they need it.

Talk about change we can believe in.