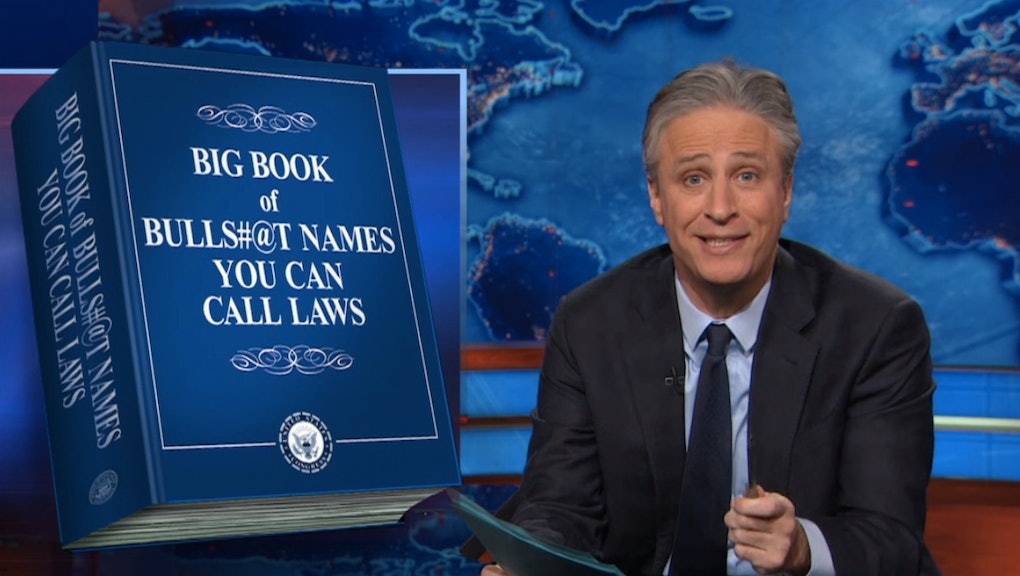 The progress for marriage equality has been stunning: 37 states have established full same-sex marriage, compared to less than half that number just a year ago. Three others have partial marriage equality established pending appeal, and nine more have marriage decisions pending. When the Supreme Court announces their decision in June on four marriage cases they're hearing this session, the results are expected widely to be positive.

But as Jon Stewart and The Daily Show team noted on Monday night, there are still those fighting against marriage equality in states such as Arkansas, Oklahoma and Texas. As one could expect, their arguments grow sillier and more irrelevant every day.

Then, of course, there's Arkansas, which tried to pass bills blocking LGBT rights efforts under names like the Intrastate Commerce Improvement Act. As Stewart noted with a giggle, even Walmart, the friendly face of evil corporations, said the bill doesn't fit their values.

Then there's Oklahoma, where a bill to ban all civil marriage licenses altogether was introduced by state Rep. Mike Turner. The hope, it seems, was to turn marriage into a purely religious institution.

That's not all for Texas, though, with state Rep. Tony Tinderholt coming out swinging against a Travis County judge who allowed a lesbian couple to get married. Why did the judge allow this? One of the two women has ovarian cancer.

These efforts are not representative of a healthy movement. These are the last gasps of a hate-spewing minority that is about to be soundly defeated come June. For the LGBT community, this is a major moment of success, though the work is not over. The Arkansas bill, Stewart noted, doesn't just work to block marriage, but discriminates protections in the workplace based on sexual orientation. Men who have sex with men still cannot donate blood within a year of having intercourse.

There are major battles to be fought ahead. Luckily, if the examples Stewart highlighted are any indication, the men and women on the right side of history will keep winning each and every one.