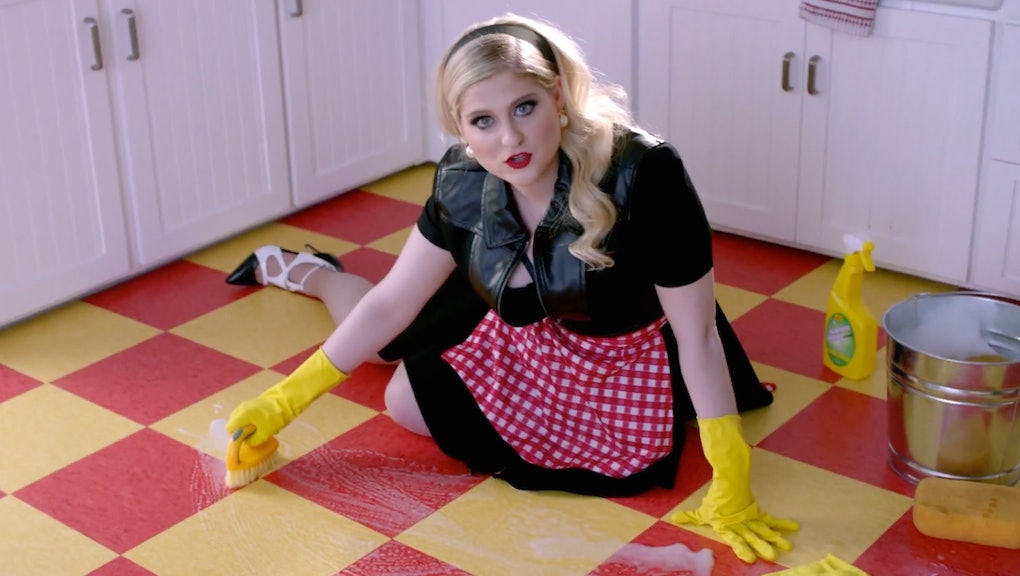 Pop star Meghan Trainor just released the most sexist song of the year. If last summer's "All About That Bass" was an anti-feminist anthem, then "Dear Future Husband" is a magnum opus.

Over a sickly-sweet doo-wop melody snatched straight from Dion's "Runaround Sue," Trainor sings about buying groceries for her man, as long as he buys her flowers in exchange. The pop singer has been called role model for young women, yet told Billboard, "I don't consider myself a feminist." It shows.

"I want to make sure guys take me on a date and treat me right because I didn't do that in the past," Trainor told Time about her album in the fall.

In this song especially, Trainor bases her self-worth on male acceptance. "Dear Future Husband" features Trainor writhing around on the floor as she scrubs the kitchen tiles in her Craftsman model home. The video and song are so plastic-perfect they're eerie: It's like watching propaganda. "Tell me I'm beautiful each and every night," Trainor sings.

But the most egregious line in the song is, "You gotta know how to treat me like a lady / Even when I'm acting crazy / Tell me everything's alright." Apparently that pesky hysteria stereotype still hasn't been put to bed. Bitches be crazy, because periods. Duh.

As the video goes on, several men come knocking bearing gifts, and none of them meets Trainor's expectations. One handsome but apparently weak man strikes out when he can't hit the bell on the carnival strength tester. Obviously only strong men are adequate suitors. The look of disappointment on Trainor's face is enough to set women back five decades.

That's because "Dear Future Husband" isn't just bad for women; it's also bad for men. "Take me on a date / I deserve it, babe / And don't forget the flowers every anniversary," she sings. Those kind of retrograde relationship expectations place heteronormative gender roles into inflexible molds. "Even if I was wrong / You know I'm never wrong / Why disagree? / Why, why disagree?" God forbid men should have a say in matters of marriage, be thin or wish to disagree with Meghan Trainor when she is, so clearly, so very wrong.

It may be "just a pop song," but thousands of little girls will be singing "Dear Future Husband" on the playground soon enough. This song teaches kids that men are born to be husbands and women are born to be wives. But that kind of rationale wears away at a woman's right to be anything she wants. Trainor's politics carry a dangerous message — one that we should have left behind long ago.