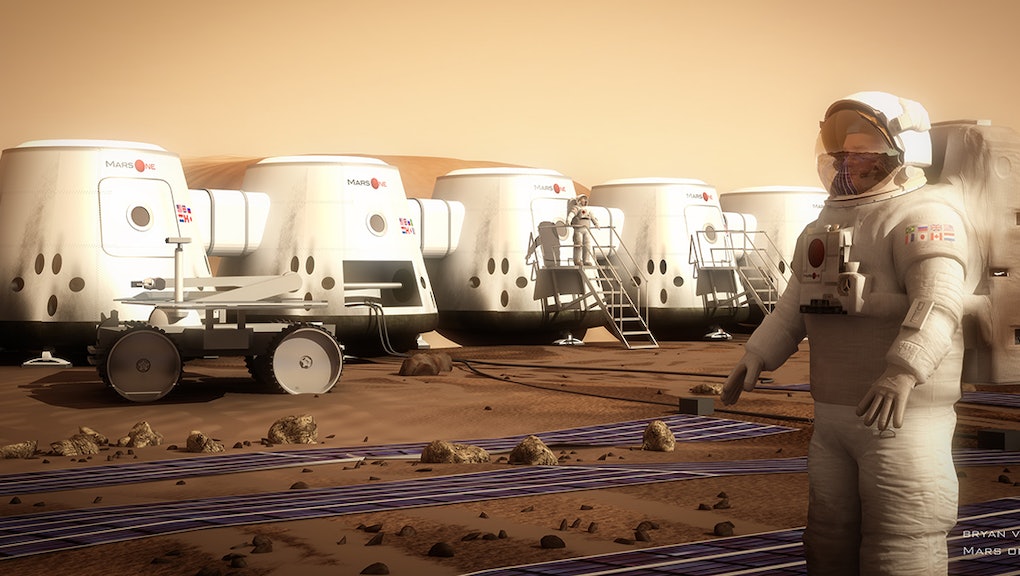 Sorry, But the Mars One Private Space Mission Is Broke, Sketchy and Probably a Scam

Mars One is falling apart.

The ambitious private project to establish a fully functioning colony on the Red Planet via a reality show format (yes, really) is apparently broke, lost its production company and has no technically credible plan to get the astronauts there.

An inside look at the process courtesy of one of the people applying to join the mission shows that Mars One isn't just a failure — it might be an outright scam.

Lots of questions: Mars One finalist and astrophysics expert Joseph Roche told Medium that many of the claims floating around about the project were exaggerated:

1. Instead of the 200,000 applications the organization said it received, Roche said, Mars One received 2,761.

2. He alleged that the process for selecting applicants used a "point" ranking system in which the only way to gain more points after the initial review process was to buy merchandise, donate money to the project or convince their friends and family to contribute for them.

3. Furthermore, Mars One asked all contestants to donate 75% of any speaking fees to the mission.

4. As a result, Roche told Medium, the top 10 candidates for the mission recently profiled in the Guardian were contestants who had contributed the most funds to Mars One.

Shroud of mystery: For a project that aims to raise $6 billion in operating costs for the initial trip to Mars, all this scrounging about for loose change looks mighty suspicious. But that's not even the most damning part.

Roche said that despite being a finalist, he has not met a single member of the Mars One team in person, and his interview process — which was allegedly going to include regional interviews and several days of extensive tests — involved a 10-minute Skype session with the company's medical officer that mostly involved being quizzed on basic information about Mars. After he signed a non-disclosure agreement, however, Roche was told that the regional interview was not going to happen and he would have to Skype in.

"That means all the info they have collected on me is a crap video I made, an application form that I filled out with mostly one-word answers ... and then a 10-minute Skype interview," he said. "That is just not enough info to make a judgment on someone about anything."

In response to the criticisms, Mars One told Mic via email that Dr. Roche's post contains "many false accusations," claiming that they did in fact receive over 200,000 applications and that advancement in the selection process has nothing to do with the point ranking system. Mars One also pointed to a rebuttal of the claims made by Dr. Roche also posted to Medium by another finalist which stated that the original post was "conspiracy theory."

Mars One's problems don't end there. According to Sky News, production company Endemol, which was originally slated to produce a companion reality television show for the project, has pulled out "after failing to reach agreement on the details of the contract."

But even if they had funding, the project would still be close to impossible, writes ScienceBlog's Ethan Siegel. The technical challenges of launching a sizable payload from Earth, shielding the crew from deadly radiation en route and landing on Mars without burning up or exploding on the surface would be an immense task for NASA on a moon landing-style $150 billion budget.

And even if they were to manage this type of landing — which has never been done before — there's still the monumental, if not impossible, task of building a human life-sustaining colony on Mars. It's hard to imagine a private organization like Mars One could pull that kind of funding together, let alone have enough left over to produce a reality show.

MIT scientists concluded that the astronauts, even in the unlikely scenario they made it to Mars in good shape, would starve to death. MIT engineer Sydney Do told Popular Mechanics that "it looks a lot like, across the board, the Mars One team seemed to use the most optimistic numbers possible ... there's a great danger in getting complacent about your ability to keep humans alive in space."

Awful planning, management that seems more eager to make a quick buck than deliver results and an embarrassingly inadequate selection process for crew members — this sounds familiar. Is Mars One building a planetary colony, or the Springfield monorail?

There are plenty of reasons that Mars One should never make it to the launch pad. Fortunately, it's becoming increasingly obvious that it won't.