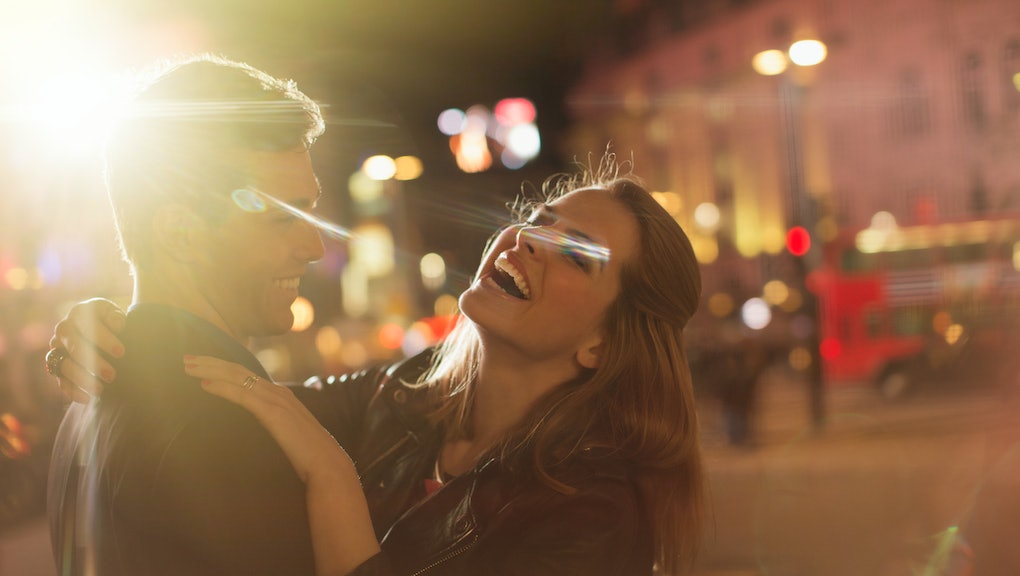 The Thing That Makes Our Dates Great Is Actually the Simplest, Says Science

You're heading home after a date and playing it back in your head: You split an appetizer, strolled casually through the park and by the end of the night, you were both referencing the same bad '90s movies. But how do you know it was a really great date?

You were both laughing. As it turns out, the simple act of laughing together might be the key to forming close relationships.

Giggling your way to intimacy: For a recent study published in the journal Human Nature, researchers had 112 students group off and watch one of three different 10-minute clips: a stand-up comedy routine, a golf instruction video and an excerpt from BBC's Planet Earth. The objective was to see what factors could facilitate close relationships. So after the screening, each group member was asked to write a message to another member as a way of getting to know one another.

The results showed that participants who had watched the comedy clip and laughed the most ended up disclosing more personal information than those watching golf swings and nature scenes. Laughing together made people feel more intimate and open up, the researchers concluded.

The willingness to open up is key. Getting closer to someone you've just met often begins with self-disclosure, whether it's revealing your favorite foods or recounting a family tragedy. Revealing private matters, after all, is the magic behind the famed 36 questions experiment.

"Having laughed, the 'laugher' is more open to revealing things about themselves to the other, forming the foundations for an exchange that might lead to the development of a deeper relationship," lead study author Alan W. Gray told Mic.

The power of laughter: Laughing might be a key social lubricant because it triggers endorphins, the "happy hormones" that contribute to the formation of social bonds. The researchers found that "the opioid effect of endorphins makes individuals more relaxed about what they communicate," and less focused on themselves.

As the researchers observed, we may not even notice the way laughter opens us up or how frequently we do it. "If you look at the way people talk to each other, even strangers, you will see just how much of conversation is peppered with laughter, and also how the aim of much casual chat seems to be to make the other laugh," Gray said.

Looking for that "GSOH": Is that why we're always looking for someone with a good sense of humor? According to Match.com's 2015 Singles in America survey, 90% of men and 97% of women who responded rated "a sense of humor just as important as physical attractiveness."

"Laughter... [is] not just a direct response to joke telling. Humor might be a way of tapping into the bonding effects of laughter," Gray said. Those effects are what make us feel close to someone, leading us to open up more and get even closer.

Which is something anyone who's been on a great date or fallen in love can relate to. If you find yourself giggling endlessly on a first date, there's a good chance there will be a second (and a third, and a fourth...).