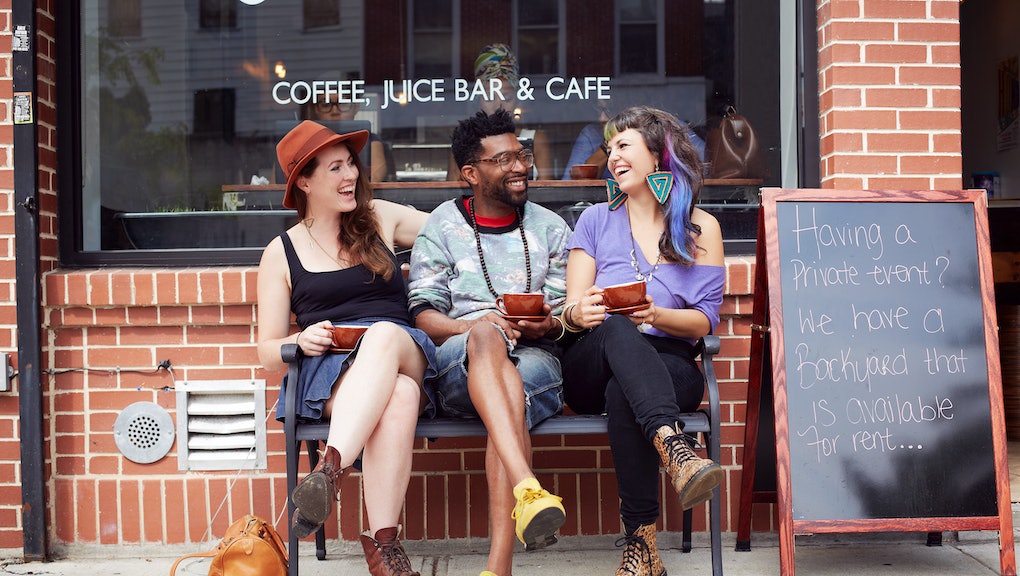 The question wasn't accusatory so much as quizzical, accompanied by a curious head tilt as he awaited my response. A professional acquaintance and I were talking shop when the conversation meandered in a more casual direction, bringing with it the inevitable subject of dating.

You'd think I'd have a more convincing answer, given that it's a question I face regularly as a 20-something woman, and as a dating and relationships editor in particular. It often comes from people in my parents' demographic, wanting to know if there's "someone special" in my life.

But it also comes from my peers, those tooling around on Tinder and going on their third Hinge date this month. They're putting in the time and effort, prioritizing dating in busy lives that also include friends, family, careers, fitness, sleep. They're getting out there — buying the drinks, taking the cabs and laboring over the texts.

And I'm pretty much not.

Explaining yourself: Dating is what you do if you're young. It's what you do if you're normal and sociable. Everyone else is doing it, to the extent that it is a frequent topic of conversation in the office break room, at the bar at happy hour and out to dinner with friends. Dating also requires effort and commitment, an aspect of it that's rarely acknowledged.

Yes, I go on enough dates to contribute to the occasional happy hour conversation. (I'm not a hermit.) But the question "Are you dating?" is a weighty one that demands a status update on your current state of existence. It's like Ellen Page gripes in Juno, about a similarly baffling question: "I hate it when adults use the term 'sexually active.' What does it even mean? Am I gonna, like, deactivate someday or is it a permanent state of being?"

The dating question also implies a state of being — are you currently in the ongoing process of dating multiple people? Is it something you actively do on a regular basis? Do you make it a priority in your regular schedule? When spelled out that way, my answer is pretty clear-cut: No, I don't really date, because I'm pretty much not trying to.

But somehow, that response elicits raised eyebrows and confused looks. "You don't date?" people ask. "Why?"

Recovering from a bad breakup, living in an area with few prospects, working long hours that keep you in the office all night — all of these are valid excuses to not be dating. Not wanting to make the effort or commit your time to it, on the other hand, aren't nearly as accepted.

Actually, I'm good: But there's no reason they shouldn't be. For one, dating is expensive, either if you're a guy going out with a woman (men still bear much of the burden, surveys have found) but also if you're one of the increasing share of women (we see you, Emma Watson) who rightfully insist on paying or splitting the bill. According to Match.com's 2014 Singles in America Survey, singles spend, on average, $60 a month on "dating-related activities," reported USA Today; that number goes way up if you live in a place like New York City where a single beer costs about $11. (I kid. Mostly.)

Cost aside, dating takes effort, particularly in an era of seemingly endless choice. "I find it insanely overwhelming," a friend, also in her twenties, told me previously. "At what point do you stop swiping?" Perhaps never — you really could swipe right forever, digging yourself into a bottomless pit of matches, a fraction of which ever materialize on dates.

But the most important factor for me may sound minor, but I swear isn't: the time commitment. It's not the hours per se; I'm fortunate enough to not work 80-hour weeks or juggle multiple jobs. As a young person with few responsibilities beyond keeping herself alive, I realize I'm blessed with more time than most. But my time is so wonderfully full — full of friends, full of family, full of other interests and passions. (I'm not stamp-collecting or taking a microbrewing classes, but hitting the occasional art exhibit or dance performance, not to mention working out, take up time. Just ask anyone else who's on ClassPass.)

Populated by meaningful relationships and fulfilling hobbies, my life isn't empty without dating. On the contrary, it feels almost too full to fit it in.

What really matters: But all those reasons, however valid, should not matter at all. Sometimes, you just don't want to date, and that should be enough. In fact, an intriguing 2006 Pew Research report found that "most young singles in America do not describe themselves as actively looking for romantic partners," and that 49% hadn't been on more than one date in the past three months.

Moreover, despite what the constant coverage around online dating, marriage rates, casual sex and pesky divorce stats would have you believe, non-romantic, non-sexual relationships are pretty damn special. In fact, they may be some of the most important relationships we have.

As Ann Friedman wrote so poignantly in the Cut last year, "Lifelong relationships of any sort are a rare and impressive feat, but long-term friendship is at least as viable and rewarding as long-term romantic love." The problem is that these relationships always seem to get second billing, Friedman notes: "Somehow, devoted friendship — transcendent love without the sexual component — is seen as optional, a less pressing concern than either work or family. Or worse, a relic from childhood."

But friendships, not to mention relationships with parents, siblings, coworkers and mentors, are important to maintain and offer a huge payoff. Our lives are full because of them.

Sometimes, you just don't want to: That's not to say romantic partners don't have their benefits. I've dated, and I've loved, and I know how amazing it can be. But with so much filling your life, finding the One via dating just doesn't always feel immediately pressing.

My best friend and soulmate Taylor Swift feels me. As she takes a break from her revolving door of high-profile boyfriends and focuses on work and friends, she's been able to perfectly explain why dating just isn't on her radar.

She isn't angry over a breakup or in need of "me time" time, and she's certainly not hard-pressed to find a potential suitor. Instead, Swift told the Telegraph, "I'm in a different place in my life, where love isn't really a priority. I haven't dated anyone in years."

Sometimes, you just don't feel like dating. And that's the only explanation necessary.