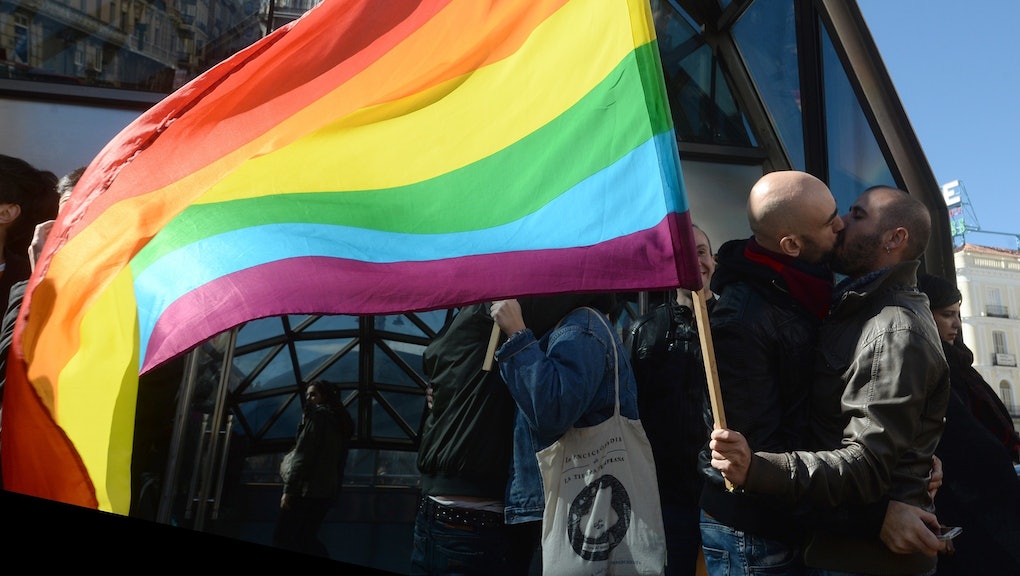 Oregon's House of Representatives voted Tuesday to ban use of gay conversion therapy on young people, citing the practice's potentially harmful effects upon an individual's mental and emotional well-being.

"Conversion therapy itself can cause incredible emotional and mental trauma to people, particularly young people in the process of coming to terms with their sexual identities," Rep. Knute Buehler, a Republican who voted to ban the practice, told the Associated Press. The measure will now move to the Senate for approval.

The controversial practice is designed to change one's sexual orientation from gay to straight using a variety of methods — something the American Psychological Association advises against, given that same-sex attraction is perfectly normal and doesn't need "curing."

The measure was championed by various LGBT activist groups, who saw it as a step toward full legalization. "Today was really strong support for the bill," Jeana Frazzini, executive director of Basic Rights Oregon, told the Oregonian. "I think we're in a really strong position to get it passed."

It can be horrific. But while some are waking up conversion therapy's pitfalls, it's still practiced around the country, and many have been subjected to its so-called "pray the gay away" efforts.

LGBT activist Samuel Brinton was 12 years old when he told his father he sometimes felt attracted to his best friend Dale. In response, his father, a Southern Baptist minister, punched him in the face. Shortly after his admission, he began his conversion therapy, where he was subjected to a range of horrific treatments.

He was made to believe he was dying of AIDS; his hands were exposed to extreme heat and cold when shown photos of two men holding hands; he endured small electric shocks while while looking at pornographic photos of two men.

While he eventually escaped the ordeal — by convincing his parents the therapy had worked — his experience left scars. "I'm ruined," he told Bay Windows, an LGBT publication based in New England.

But things are looking up. Given its dubious, unregulated and pseudoscientific nature, the therapy has come under fire from activists and politicians alike. In fact, Oregon isn't the first state to take notice — California, New Jersey and Washington D.C. already have policies in place to ban conversion therapy.

Other states are also attempting to fight the "pray the gay away" mentality. A similar measure was introduced Friday in Texas, and an Illinois House committee passed a gay conversion therapy ban on Tuesday. Though none of these measures, including Oregon's, have turned into law, the fact that they've made it this far is a signal that states are beginning to take notice.

A new frontier. The fight for equality has gained steam across the country in recent years, particularly when it comes to marriage equality, but the battle against gay conversion therapy has come into its own.

In June 2014, the National Center for Lesbian Rights launched the #BornPerfect campaign, which aims to both pass legislation and raise awareness of gay conversion therapy's damaging effects.

"The practice of conversion therapy is based on the dangerous, false and completely unscientific premise that being lesbian, gay, bisexual or transgender is an illness or disorder," #BornPerfect campaign coordinator Samantha Ames told Mic via email. "Young people who are subjected to this 'therapy' are often severely damaged, often with lifelong negative consequences."

"The new frontier in LGBT activism is fighting for full inclusion and support of LGBT youth in their families, communities, and schools," Ames added. "Putting an end to conversion therapy is an essential part of that effort."

Bad science. In 2009, an American Psychological Association task force found that "efforts to change sexual orientation are unlikely to be successful and involve some risk of harm, contrary to the claims of SOCE practitioners and advocates."

Moreover, after parsing through 83 studies performed on the topic, researchers concluded that virtually none of them were scientifically sound, and that "given the limited amount of methodologically sound research, claims that recent [conversion therapy] is effective are not supported."

The study that many conversion therapy advocates point to — a 2003 report authored by a prominent psychiatrist that supported the use of reparative techniques — was debunked by the author himself. "I believe," he later wrote in 2012, "I owe the gay community an apology."

Given this kind of evidence, it's time for other states to follow Oregon's example and outlaw this arcane and potentially life-damaging practice.