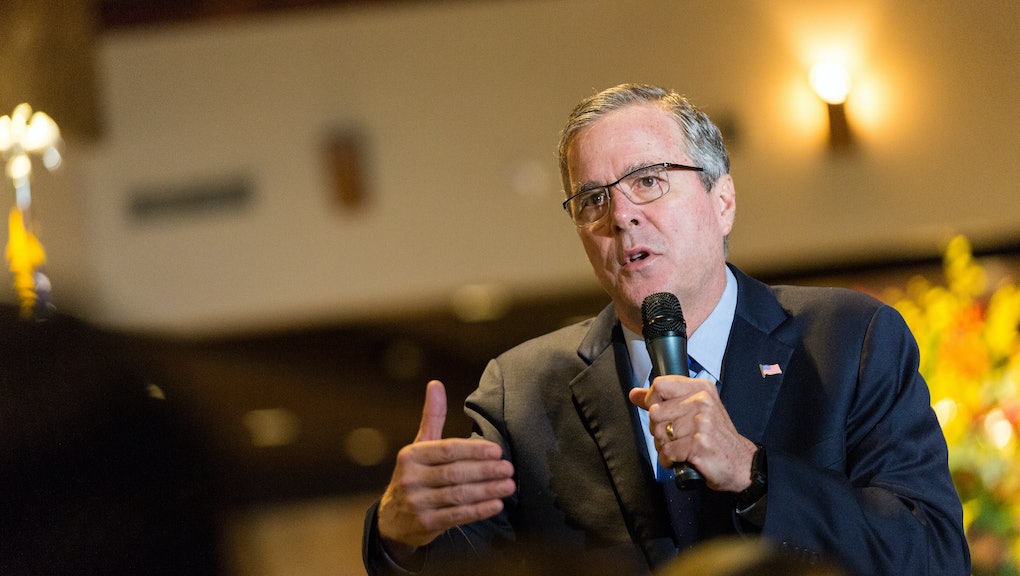 During an appearance on Tuesday in South Carolina, former Florida Gov. Jeb Bush fielded a question about what, if any, role the government should play in setting a minimum wage. He replied by appearing to argue against having a federal minimum wage at all.

"We need to leave it to the private sector," he said, in a clip circulated by the Democratic National Committee. "I think state minimum wages are fine. The federal government shouldn't be doing this."

Bush argued that raising the federal minimum wage would lead to job loss in the economy, and pointed to Wal-Mart's momentous decision to raise its entry-level wages to $9 an hour as an example of how supply and demand raises wages without government intervention.

"Politically, I'm sure it's a great soundbite," Bush says in the video. "But from an economic point of view, this is not how we need to be successful."

Democrats took Bush's remarks as an indication that he wants to do away with the federal minimum wage altogether. But the Associated Press reported that Bush said he is only against raising it any further, not abolishing it altogether. A Bush spokeswoman did not respond to a request for comment.

The idea that raising the federal minimum wage will devastate the economy was trotted out in response to President Barack Obama's call for raising the wage from $7.25 per hour to $10.10 per hour during his 2014 State of the Union address. But there's little evidence that that kind of bump, which would be the first one in more than five years, would devastate the economy. Last year, a letter signed by 600 leading economists (including several Nobel laureates) addressed the myth:

In recent years there have been important developments in the academic literature on the effect of increases in the minimum wage on employment, with the weight of evidence now showing that increases in the minimum wage have had little or no negative effect on the employment of minimum-wage workers, even during times of weakness in the labor market. Research suggests that a minimum-wage increase could have a small stimulative effect on the economy as low-wage workers spend their additional earnings, raising demand and job growth, and providing some help on the jobs front.

The letter buttressed the towering stack of of empirical evidence that minimum wage increases can boost income without slowing job growth or rendering companies unprofitable.

Regarding Wal-Mart's decision to raise its wages this year, the example is a poor one. While the move does signal important things about supply and demand in the labor market — unemployment is returning to normal levels, and so employers have greater incentive to raise wages to retain workers who have more options — there are other essential factors as well. Wal-Mart was likely trying to get ahead of the curve: State minimum wage raises were forcing the company to raise wages in one-third of its stores. Bush has not argued against states regulating minimum wages, but he argued in his remarks that the market is the reason Wal-Mart raised wages.

Just as importantly, a multi-year national campaign to shame Wal-Mart for paying its workers meager wages, along with a wave of increasing unrest among its employees, was taking a serious toll on its reputation. In other words, it is impossible to say Wal-Mart's conduct was a pure expression of the invisible hand.

There's also a simple moral imperative to having a robust federal minimum wage. The federal minimum wage is a guarantee to provide some minimal standard of life and dignity for all workers regardless of a state's attention to its most vulnerable workers.

Bush is right on one point, though: Raising the minimum wage does poll well across the political spectrum. Four red states voted to raise their minimum wage at the midterm elections last November. Standing for a higher minimum wage is unlikely to cost Bush his base, and would allow him to have some actual credibility as he campaigns as someone claiming an interest in a more inclusive economy.