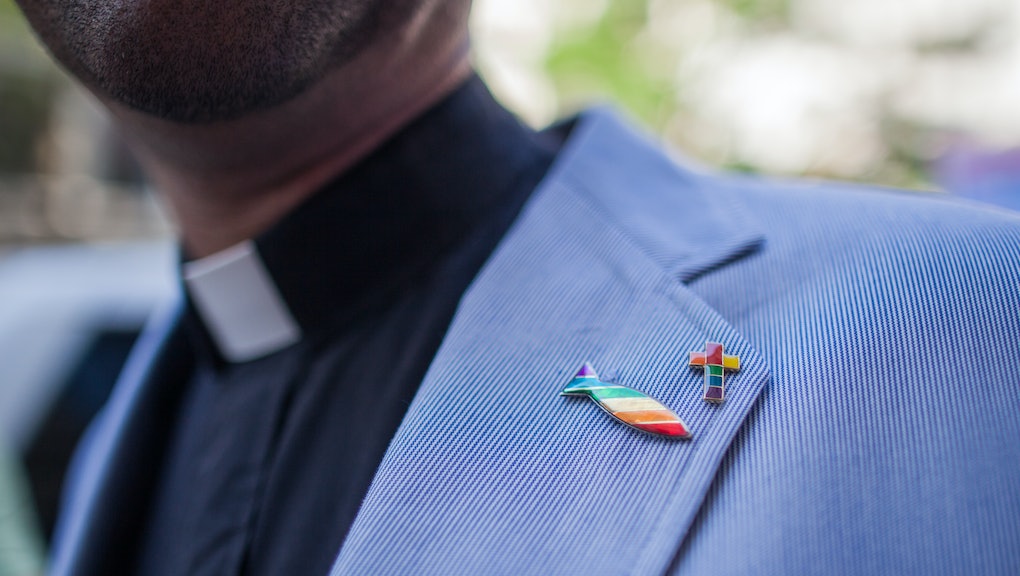 Gay marriage is probably coming to a church near you — and soon.

One of the largest Christian churches in America has now formally endorsed same-sex marriages and instructed its clergy to begin performing same-sex ceremonies. It's a major win for the LGBT community, especially those who happen to be Christian.

What's happening: CNN reports that the Presbyterian Church (U.S.A.), the largest Presbyterian denomination operating in the United States, has voted to allow its pastors to marry same-sex couples in the 37 states that enjoy marriage equality. The church also voted in a large majority to modify their church constitution to change references about marriage as being "between a man and a woman" to "two people, traditionally a man and a woman."

"The church affirmed all its faithful members today. This vote is an answer to many prayers for the Church to recognize love between committed same-sex couples," More Light Presbyterians executive director Alex McNeill told CNN. "We will keep praying that the majority of our 172 presbyteries will confirm that all loving couples can turn to their churches when they are ready to be married."

Covenant Network of Presbyterians executive director Rev. Brian D. Ellison was even more joyful about the changes, telling the New York Times that "Finally, the church in its constitutional documents fully recognizes that the love of gays and lesbian couples is worth celebrating in the faith community. There is still disagreement, and I don't mean to minimize that, but I think we are learning that we can disagree and still be church together."

According to the BBC, the measures were approved by the church's legislature last year but were only confirmed this week when a majority of churches voted in favor of marriage equality. While a minority of churches dissented and the bill contains a provision exempting clergy from being required to perform the marriage ceremonies if they have a moral objection to same-sex marriage, the vote nonetheless demonstrates strong support for LGBT equality among church membership.

Why you should care: Presbyterianism has always been one of the more progressive branches of Christianity in the United States, so the fact that they're jumping on board the marriage equality bandwagon isn't necessarily surprising. But it is certainly still worth celebrating.

For decades, many evangelical leaders have spent a significant amount of time painting homosexuality as inherently sinful, a moral failure and rejection of Christian teachings that puts unrepentant gays and lesbians beyond the grace of God. The Presbyterian Church is making it clear that such a narrow interpretation of Biblical teachings is not a universal constant, but a particular reading designed to exclude LGBT people from Christian society.

While opinion polls have demonstrated that a majority of Americans support marriage equality and have for several years, LGBT inclusivity at the Presbyterian Church is nonetheless important considering Gallup polling has found that 72% of Americans continue to identify as Christian. Specifically, 37% of Americans are Protestant.

With the endorsement of one of the United State's largest denominations, gay marriage is now truly mainstream. Continued right-wing opposition to gay marriage is going to look even more ridiculous now that churches are getting on board, and it's about time.