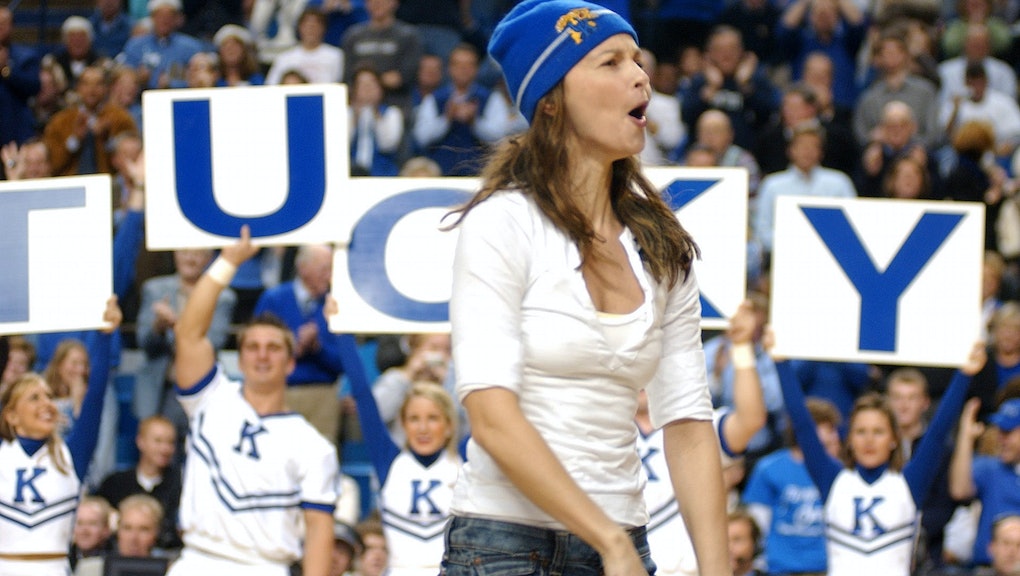 Forget Your Team: Your Online Violence Toward Girls and Women Is What Can Kiss My Ass

During a conference championship game on Sunday, I posted a comment to Twitter that some found unsportsmanlike. I didn't much care for three players bleeding on the court, and I tweeted that the opponent was "playing dirty & can kiss my team's free throw making a—." The volume of hatred that exploded at me in response was staggering.

I routinely cope with tweets that sexualize, objectify, insult, degrade and even physically threaten me. I have already — recently, in fact — looked into what is legally actionable in light of such abuse, and have supplied Twitter with scores of reports about the horrifying content on its platform. But this particular tsunami of gender-based violence and misogyny flooding my Twitter feed was overwhelming.

I deleted my original tweet after the game, before all hell broke loose, to make amends for any genuine offense I may have committed by describing play as "dirty." (Of course, other people, including my uncle who is a chaplain, also expressed fear that the athletes would be hurt badly. But my uncle wasn't told he was a smelly pussy. He wasn't spared because of his profession; being a male sports fan is his immunity from abuse.)

I love March Madness so much that even now, what I really want to talk about is how Sunday's strategy did not, in fact, work. I really want to talk about a deeply distressing dream I recently had that UConn beat us in the finals, in which we scored a scant 49 points, not to mention the oddity of why my awful dream featured UConn and not Wisconsin.

Instead, I must, as a woman who was once a girl, as someone who uses the Internet, as a citizen of the world, address personally, spiritually, publicly and even legally, the ripe dangers that invariably accompany being a woman and having an opinion about sports or, frankly, anything else.

What happened to me is the devastating social norm experienced by millions of girls and women on the Internet. Online harassers use the slightest excuse (or no excuse at all) to dismember our personhood. My tweet was simply the convenient delivery system for a rage toward women that lurks perpetually. I know this experience is universal, though I'll describe specifically what happened to me.

As I began on Twitter to identify and push back against this toxicity and abuse, I faced the standard bashing anyone (girl or boy, woman or man) experiences when objecting to and taking action against misogyny. For example:

And last: "I watched Simon Birch. Lousy movie, but I got to see Ashley Judd die."

The themes are predictable: I brought it on myself. I deserved it. I'm whiny. I'm no fun. I can't take a joke. There are more serious issues in the world. The Internet space isn't real, and doesn't deserve validity and attention as a place where people are abused and suffer. Grow thicker skin, sweetheart. I'm famous. It's part of my job description.

The themes embedded in this particular incident reflect the universal ways we talk about girls and women. When they are violated, we ask, why was she wearing that? What was she doing in that neighborhood? What time was it? Had she been drinking?

Luckily, others have have helped identify and dismantle the twisted logic of this entire incident:

I'll close with sharing why I had, before this past Sunday, already begun to research what legal actions to take against gender-based violence on Twitter.

I am a survivor of sexual assault, rape and incest. I am greatly blessed that in 2006, other thriving survivors introduced me to recovery. I seized it. My own willingness, partnered with a simple kit of tools, has empowered me to take the essential odyssey from undefended and vulnerable victim to empowered survivor. Today, nine years into my recovery, I can go farther and say my "story" is not "my story." It is something a Higher Power (spirituality, for me, has been vital in this healing) uses to allow me the grace and privilege of helping others who are still hurting, and perhaps to offer a piece of education, awareness and action to our world.

The summer of 1984 was tough for me. I experienced two rapes by an adult and systematic molestation from another adult, who also had another man in the room watching (I now understand this was to ensure he had a witness, in order to undermine me in the event I tried to report the incident). I have done purgative, cathartic work on those particular acts of violence. The nature of recovering from trauma is that it can be ongoing, with deeper levels of healing and freedom coming with indefatigable persistence to keep chipping away at it.

This January, I read three different things that freshly triggered an additional, very specific memory from age 15 — an attempted oral rape by yet another adult man. First, the Vanderbilt rape case conviction was announced, in which certain details mirrored my own experiences, especially the non-intervening bystanders (who, thankfully, in the Vanderbilt case, were charged with violent crime). Second, I read the Justice for Victims of Sex Trafficking legislation that passed the House of Representatives. Third, I re-read the Department of Justice's legal definition of rape and some of the absurd debates about it. Although I regularly engage with these kinds of issues, after reading these three particular materials, it became very clear that I needed to address my attempted oral rape; the time had arrived for that terrifying moment to be treated as a stand-alone piece of violence from which I was being given the opportunity to heal on a deeper level.

This is one of the many reasons why I believe profound dedication to self-care is essential to feminist social justice work. I knew exactly where to go and what to do. My mentor was available. We immediately scheduled experiential therapy; I thus did not have to go to the sexual assault center for triage. But let me tell you: I am exactly like every other survivor, and the sexual assault centers of our country are for me, just as they are for all of us.

The timing was canny, and I knew it was a crime. It was time to call the police, and to say to the Twittersphere, no more.

I've spent valuable March Madness time writing this. I have 6 versus 11 seed upsets to pick and opponents to scout. So for now, I am handing it back over to those of you who are unafraid to speak out against abuse like I have faced, and those of you who are righteous allies and intervening bystanders. You're on it. Keep at it — on the Internet, at home, at work and in your hearts, where the courage to tackle this may fundamentally lie. We have much to discuss, and much action to take. Join me.

Ashley Judd is a University of Kentucky and Harvard Kennedy School graduate. Her paper, "Gender Violence: Law and Social Justice" was awarded the Dean's Scholar Award at Harvard Law School. Her schools are seeded 1 and 13 in the NCAA Men's Tournament.