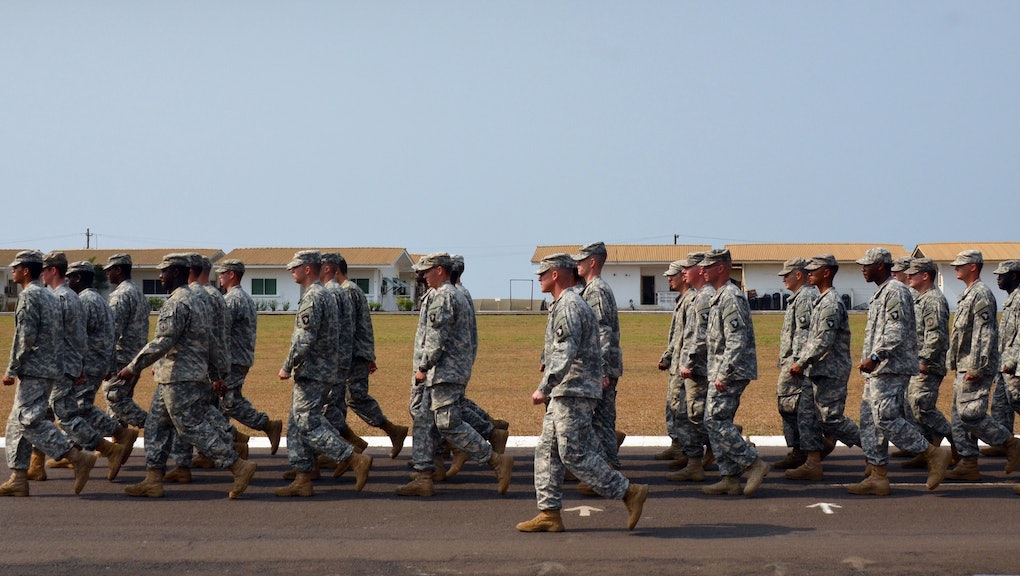 The U.S. Army Has a Day Each Week When Racism Is Allowed — What Could Possibly Go Wrong?

Soldiers in a U.S. Army platoon have been lobbing racial slurs at each other in an event known as "Racial Thursdays," the Army Times reports. The allegations were made by a staff sergeant in Fort Wainwright, Alaska, and have been under investigation since late last week.

"When I first got to my unit, someone said we should do 'Racial Thursdays' because it's been a tradition," the soldier, who requested anonymity, told the Army Times. "It's something they made up where you can say any racist remark you want without any consequences."

Sounds fun. To clarify, this is a unit housed in a majority-white military branch given carte blanche to assail its comrades of color with racist insults. Because "morale." And because "Racial Tuesdays" might interfere with the presumably less horrible "Taco Tuesdays." (U.S. Army Alaska hasn't responded to Mic's request for comment regarding "Racial Thursdays." No inquiry was made into "Taco Tuesdays.")

What could possibly go wrong? Plenty, it turns out. The platoon's sergeant reportedly asked the soldiers not to participate, but according to the Army Times, it's happening anyway. "It's degrading," the anonymous soldier continued. "We've had soldiers almost fight over the crap that's going on here."

A junior soldier verified this to the Army Times, adding that in one incident, a Latino member of the unit was bullied so ruthlessly — terms like "wetback" and "border jumper" were liberally employed — that the situation nearly devolved into an all-out brawl. "Racial Thursdays" apparently aren't fun for everyone.

The irony, of course, is that the Army needs "Racial Thursdays" like America needs White History Month. Even a cursory scan of recent Army history shows that racism is a big enough problem that it doesn't need to be encouraged with its own special day. Last summer, the U.S. Military was criticized for implementing a set of hairstyle restrictions that specifically targeted black women (the rules were withdrawn following swift and heated backlash). Reuters has reported on the infiltration of "white supremacists, neo-Nazis and skinhead groups" into the Army's ranks, tying these to the killing spree perpetrated by Wade Page, a former Army soldier who murdered six people at a Sikh temple in Wisconsin in 2012.

Another pertinent example is the case of Danny Chen, a Chinese-American Army private who committed suicide in 2011 after enduring racist taunts, harassment and violence at the hands of his fellow soldiers in Afghanistan. He was 19 years old. According to New York Magazine, he was stationed at Fort Wainwright, Alaska shortly before deployment. So if the "Racial Thursdays" allegations are true, they appear to be part of a larger pattern.

Racism is hardly the exclusive purview of the U.S. Army, of course. But like most American institutions, it's enough of a problem to warrant persistent examination. Thus far, the Army appears to be acting swiftly on the matter:

"Treating all soldiers with dignity and respect is something this command takes extremely seriously, and when there are any indications that those values are not being followed, the command will absolutely make inquiries, conduct appropriate investigations and take action as necessary," U.S. Army Alaska spokesperson Lt. Col. Alan Brown told the Army Times.

One can only hope. Welcome to "post-racial" America.