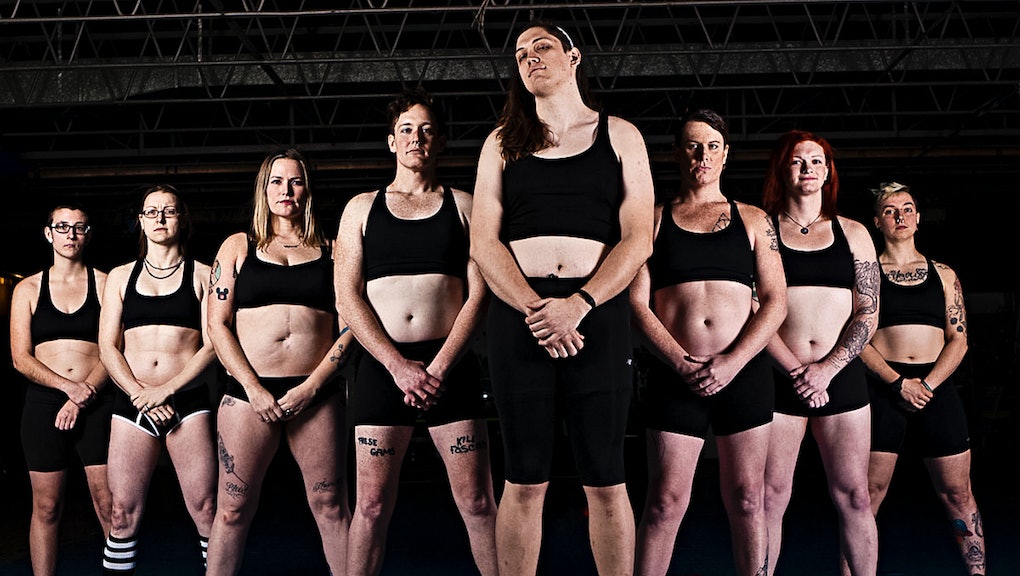 These Stunning Photos Are Shattering Stereotypes About Female Athletes

A healthy body is a strong body.

That's the message behind Cory Layman's "Body by Derby" project, an inspiring collection of images of roller derby players. The project is proving that women of all shapes and sizes can be strong and powerful — no matter their body fat percentage.

Influenced by Howard Schatz's Athlete series, Layman began his project after witnessing an exchange between two derby players who wished they were teenage athletes all over again.

"They then began talking back and forth, wishing that they could look the way they did from back in the day," Layman told Mic. "That struck me as absurd. They were 10 years older. Athletes. Had kids. And any number of other life experiences. I eventually came to realize just how skewed some people perceived themselves. So, I set out to document all different types of skaters to start giving people perspective."

That's exactly what he did. Stripped down to their basics, these women and gender-nonconforming persons show us that badass is one-size-fits-all.

Layman began photographing derby games in 2007, and today shoots between 50 to 100 games per season. He volunteers his services to Bleeding Heartland Roller Derby, from Bloomington, Indiana, and Demolition City Roller Derby, from Evansville, Indiana.

Layman collaborates with individual players in his shoots to ensure they feel the pictures best convey their derby personality.

Not your typical tough girls: Part of Layman's intention is to break misconceptions about derby girls — that they are "lesbians," "tattooed punks," "attention whores" or "man-hating feminists."

When asked about the characteristics he hoped to express in his photography, Layman told Mic, "Ask me this question three years ago and I would have given you the soundbite you'd expect: Derby girls are strong, athletic and made of stern stuff. That is mostly true, but it's only half the story."

The photographer also emphasized that "derby itself should not be promoted or sold based on female sexuality." Sexuality, he explained, is something to be "celebrated and enjoyed," and that it's acceptable to depict in his photography "only when the person chooses to do so and does it on her own terms."

"I avoid making my photos sexy. That way I'm accessible to all members of the community. There are no pouty lips or come-hither eyes unless that's what the person chose to do. I never coached them to do something like that," he told Mic.

Beauty is in being positive: "I am personally very interested and invested in society being more body-positive and more accepting," Layman said. Yet he is quick to note that his objective was never to produce a paragon of feminist photography.

"Instead," he said, "I showed that skaters could be strong and powerful and still be who they wanted to be."

Musing on the success of the series, which has captivated social media in recent weeks, Layman asserts that female beauty is not bound to ideals projected in television and film. Beauty lies in the confidence these women express in having powerful bodies that they themselves created through derby. His message to women, as illustrated in these raw, exacting photos, is clear:

"You can be what you want and be beautiful doing it."