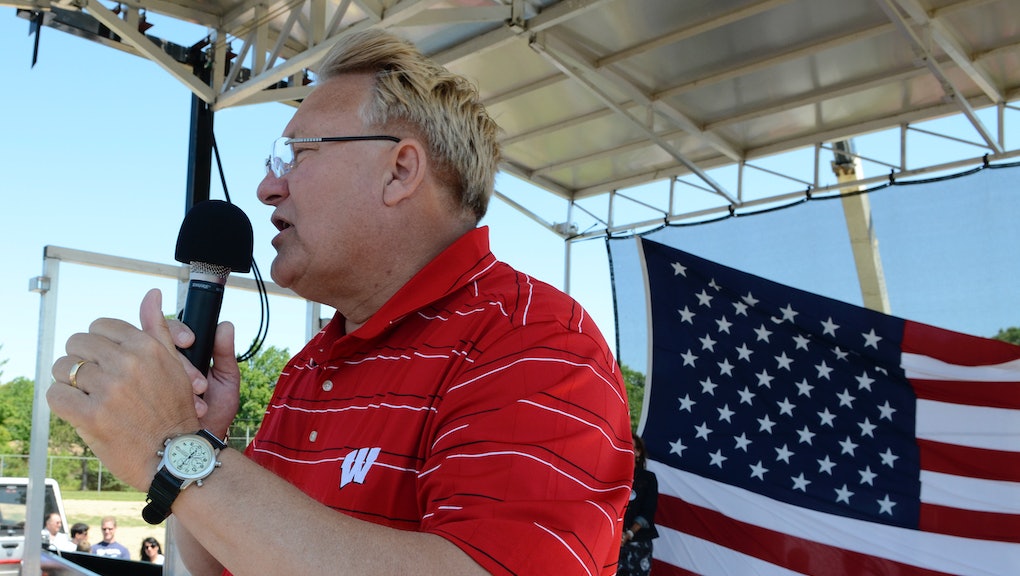 Enjoying your weekend? If you live in Wisconsin, enjoy it while it lasts, because it might not for much longer.

Fresh off of making Wisconsin the 25th state in America with "right to work" laws, the Nation's Moshe Z. Marvit reports that Republicans in the state legislature are rallying around another piece of legislation that would "repeal the weekend."

Wisconsin law requires workers in a "factory or mercantile establishment" to be given at least 24 consecutive hours off every calendar week. But Republican Reps. Mark Born and Van Wanggaard (pictured above) are introducing a new bill that would add a provision enabling workers to "voluntarily choose" whether to take the breaks.

The background: While there is already a waiver system in place for employers and employees to bypass the mandatory breaks, Marvit writes that just 232 workers filed for one in 2014. Republicans say the new bill will streamline that exemption process. But if the bill sails through both houses of the state legislature and gets Gov. Scott Walker's signature, thousands of Wisconsin workers will effectively lose their right to a mandatory day off once a week.

Instead, they will be funneled into a "voluntary" system where there's little guarantee that anyone is volunteering. Bosses could demand employees work seven days a week, and without state oversight, workers will have little recourse.

"After rushing to pass a wrong-for-Wisconsin right-to-work law that could lower family wages by over $5,000 a year it makes sense Republicans would introduce a law to repeal the weekend," Deputy Director Mike Browne of One Wisconsin Now told Marvit. "After all, with lower wages workers will see they're going to have to work that much more to try to get ahead."

"It's a very hard thing to know whether something is truly voluntary or not," Economic Policy Institute Vice President Ross Eisenbrey told The Huffington Post. "If the employer puts pressure on people and lets them know they will be unhappy if workers exercise their right to have a day off, that might be enough so that no worker ever does anything but volunteer to work seven days a week."

Employers don't like the mandatory weekend, because regulations that empower workers make it more difficult to suppress them. As the tide turns against labor in Wisconsin, Republicans are doing everything they can to expand the rights and privileges of employers. The Associated Press reports that a similar effort in 2014 was backed by Wisconsin Manufacturers and Commerce, "the state's largest business organization."

The effort to remove Wisconsin's mandatory day off for workers isn't just an attack on labor. It's based off a pernicious misunderstanding of how classes function. Republican Sen. Glenn Grothman, who led the 2014 effort, told the AP that "it's ridiculous when people want to work extra hours why Democrats would stand in the way of that. I don't know why some people want some people to remain poor."

A self-serving lie: But people don't accumulate wealth by working long hours with no breaks for little money. They accumulate wealth by being paid decent money in exchange for their labor. The myth that all the working class needs to do to get ahead is work a little harder is a self-serving lie promoted by business-friendly special interests and right-wing politicians.

Americans already work the longest hours in the industrialized world, despite the fact that longer hours are associated with less productivity. On U.S. Travel Association study found that workers who failed to take their vacation time were less likely to get a raise, suggesting a connection between management that urges workers to forego benefits and proper compensation.

On top of that, employers in the U.S. already enjoy massive power over their employees. The EPI estimates that corporate wage theft — tactics like not paying mandated overtime, forcing employees to work off the clock and asking them to perform minor duties like cleaning up or closing stores without pay — costs workers at least $50 billion a year.

Employers aren't backing this rule change to give workers a leg up. They're doing it so that they can squeeze every worker to the last nickel and dime. A regulation requiring at least one day off for all employees is neither onerous nor unfair to management.

Taking it away would be terribly unfair to the people actually doing the physical work that powers Wisconsin's economy, and would be yet another bad omen for those watching the labor rights movement die a slow death across the country.