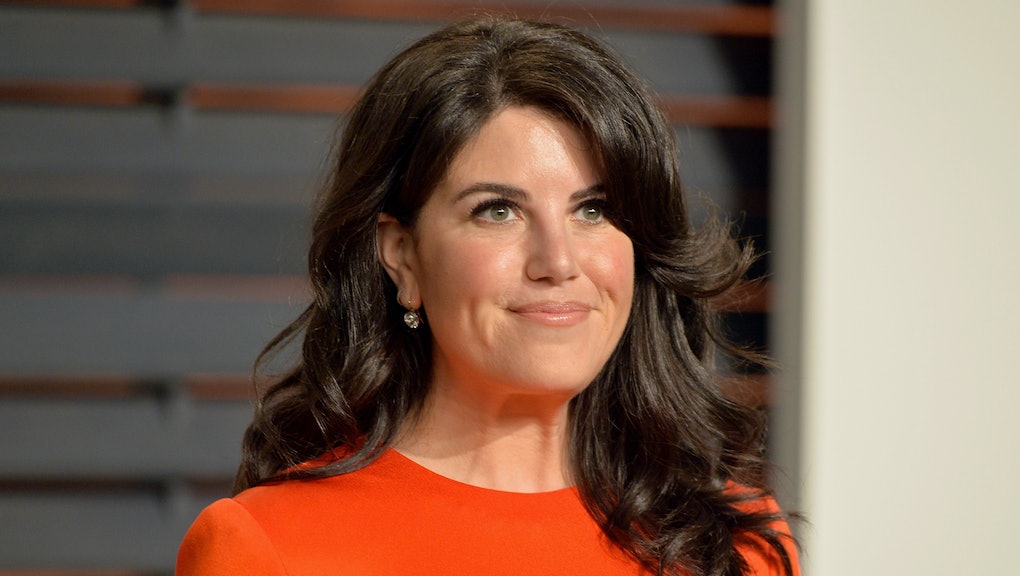 For most millennials, Monica Lewinsky first entered our consciousness as a punchline.

"The president is going down faster than a 21-year-old intern trying to jazz up her resume," said Don Imus. "Monica Lewinsky told this month's Cosmo magazine that if it weren't for Bill Clinton, she would be a mom now, with two kids. Really? Not the way she was doing it," quipped Jay Leno, who dedicated 454 jokes to Lewinsky over the course of his tenure on The Tonight Show. "Now we hear that Monica has sued the president for $1,000,002.50," began one of the David Letterman's hundreds of jokes about a blue dress. "That's one million for pain and suffering and $2.50 for dry cleaning."

Nearly two decades since she became a household name for what 20/20 called "the affair that nearly toppled the president," Lewinsky has again reentered the public conversation. Not for selling a failed handbag line or trying her luck as a reality television host, but for a monumental TED Talk taking on America's "culture of humiliation" — a topic she is perhaps more familiar with than anyone.

"At the age of 22, I fell in love with my boss," Lewinsky begins. "And at the age of 24, I learned the devastating consequences." In the speech, Lewinsky describes herself as "Patient Zero of losing a personal reputation on a global scale."

At the beginning of the Information Age, where an Internet site had never before broken a major news story and social media did not exist, Lewinsky describes the backlash against her as the first public excoriation of a private individual in Web history. Years before #TheFappening and the hacking of Sony's emails, Lewinsky describes what happened to her in now-familiar terms: "The stealing of peoples' private words, actions, conversations or photos and then making them public — public without consent, public without context and public without compassion."

The public reaction was swift, brutal and, frequently, sexist. "I was branded as a tramp, tart, slut, whore, bimbo and, of course, 'That Woman.' I was seen by many, but actually known by few. ... When this happened to me 17 years ago, there was no name for it. Now, we call it cyberbullying and online harassment." She tears up while describing her parents' fear that the late night jokes, the Starr Report's publication, the public humiliation on a global scale would humiliate her to death.

It was the death of Tyler Clementi, a freshman at Rutgers University who committed suicide in 2010 after his roommate surreptitiously recorded him being intimate with another man, that recontextualized her own public humiliation — and the importance of fighting against a culture "where public humiliation is a commodity and shame is an industry."

"Why now?" According to Lewinsky, "Because it's time." The rise of online media that traffics in the shame and humiliation of private individuals, particularly in that of women, requires its victims to stand up and demand compassion from those who see them as just another cautionary example — and Lewinsky knows that better than anyone.

Lewinsky told the New York Times she still grapples with the aftermath of her public humiliation; she's still unable to watch police officers flash badges in films. "I had to do a lot of healing work and rehabilitation to get to what transpired over the course of the past year," she said. "Anybody who has gone through any kind of trauma knows it doesn't just go away with a snap of the fingers. It lives as an echo in your life. But over time the echo becomes softer and softer."

For those who have been publicly shamed or cyberbullied on social media — according to the Cyberbullying Research Center, 25% of middle and high school students report having had it happen to them — Lewinsky's parting words are an inspiration to take back their own identities: "We all deserve compassion, and to live both online and off in a more compassionate world."